If you starting to sense that things are just harder for you in recent years and that there's all this American wealth that you're not able to get a piece of, no matter how hard you work, then you're not crazy. That's exactly what's going on. Since Reagan became President, the amount of income and wealth that goes to the very wealthiest in this country has been climbing, and now we're hitting record levels.

The top 10 percent of earners took more than half of the country’s total income in 2012, the highest level recorded since the government began collecting the relevant data a century ago, according to an updated study by the prominent economists Emmanuel Saez and Thomas Piketty.

The top 1 percent took more than one-fifth of the income earned by Americans, one of the highest levels on record since 1913, when the government instituted an income tax.

As Annie Lowrey of the New York Times says, this country really is in a new Gilded Age, a 21st century Dickens novel.

The rich have such an unfair share of the nation's collective wealth that even the bleedout of wealth during the recession was barely a blip on the radar, as these charts show: 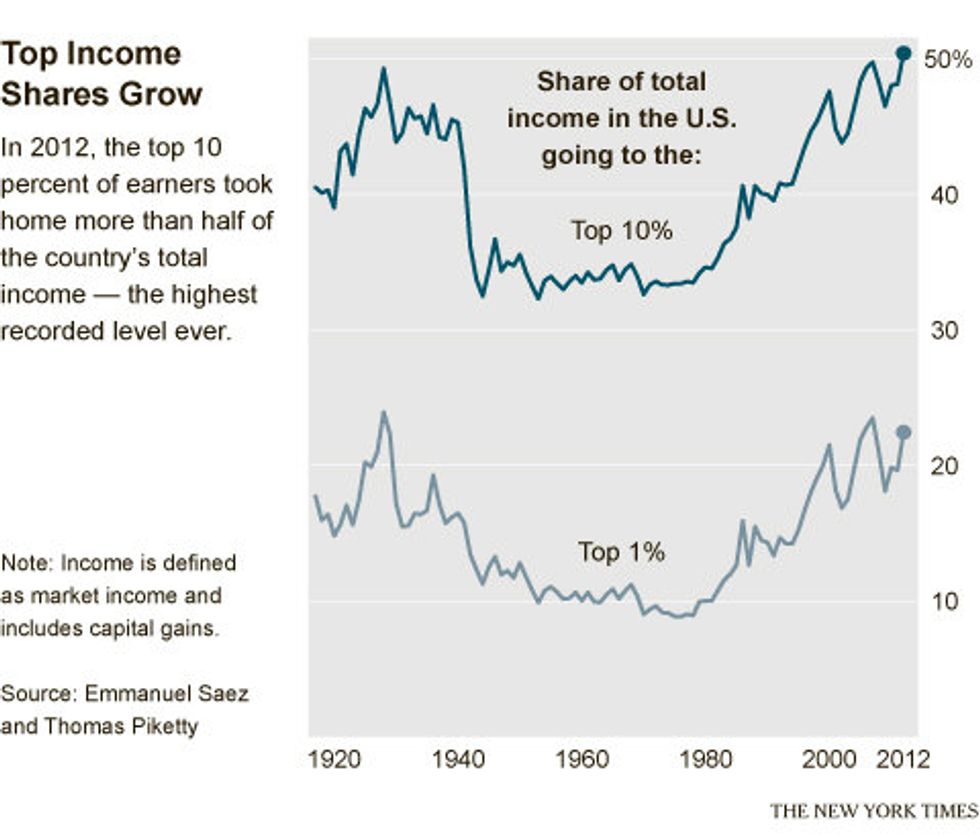 Because of the pressure from right wing media and just the general ease with which people kick around the poor in this country, most of the discourse about who deserves what is about debating how much food we'll allow the poor to have. It should be obvious, but this is the bigger problem. Imagine if half your paycheck was taken away and given over to people who are far more wealthy than you could ever hope to be. That's basically what's going on. There's no way that the top 10% of earners are working so much harder than everyone else that they deserve half the money. That's an asinine argument.

Occupy Wall Street at least drew people's attention to the issue, and it's not going to be background noise in the same way it used to be. That said, there's no clear political path to changing things. The Democrats show no interest in tackling this problem. That said, I do believe if the Democrats managed to ever have the political dominance that Republicans have routinely enjoyed in these past few decades, that they would start to make some movements in the right direction. There's a kind of vicious feedback loop going on right now where Democrats can only hang onto a majority for two years, tops, which makes them think the country isn't interested in truly progressive politics. I used to be a big fan of the idea that we should punish the Democrats until they start acting right, but now I see how the narrative that the country is moving to the left will only take hold....if the country starts moving to the left. And the way to demonstrate that is to vote for Democrats, and vote for the most liberal Democrats. The blunt fact of the matter is people learn better from success than failure. We want more liberal politicians, we need to elect them. Which is why de Blasio's win for the Democratic nominee for NYC mayor is so heartening; while there were plenty of "he's not liberal enough" broadsides to go around, the voters basically rejected the idea that we should give up in defeat since there was no one better to vote for. Now the narrative is going to be that New Yorkers love liberals---which is good!

Also, to be blunt, it's impossible for Democrats to get to the hard work of fixing this problem when they can never hold onto federal power for more than two years. Maybe they'd do something---like get rid of the Bush tax cuts---or maybe they wouldn't. But we can't know because they never get a real chance to try.