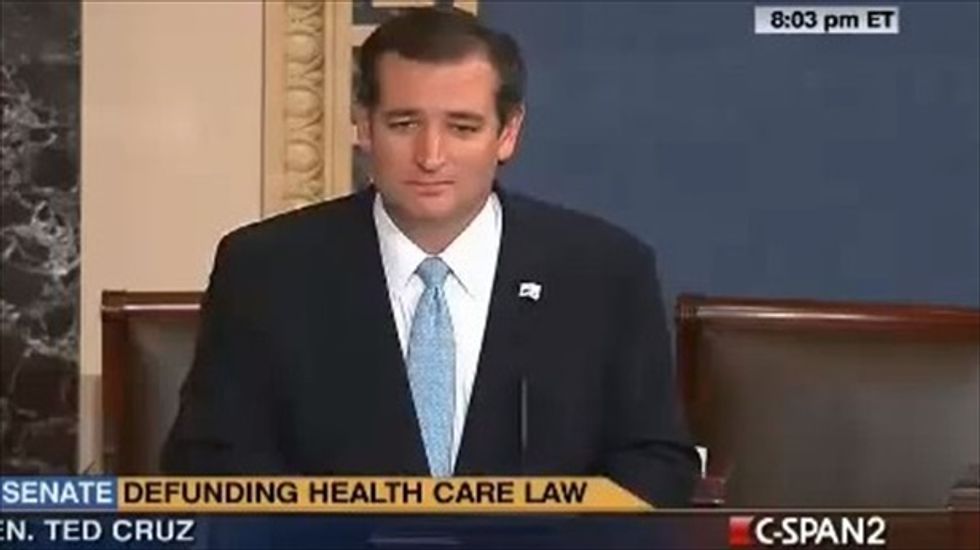 Sen. Ted Cruz's (R-TX) burgeoning quarrel with his fellow Republicans played out on the Senate floor on Thursday, when party mate Sen. Bob Corker (R-TN) accused him and Sen. Mike Lee (R-UT) of delaying a vote so they could draw more attention to their campaign against funding the Affordable Care Act.

"I'm understanding the reason we're waiting is that y'all have sent out releases and emails and you want everybody to be able to watch," Corker said, according to the Washington Post. "It just doesn't seem to me that that's in our nation's interest. Nor is it, candidly, in the interest of those who want to see good policy on the conservative side"

Corker also pointed out that, while Lee assisted Cruz in his 21-hour "filibuster" against a bill that will come to include funding for the new law, both then joined the rest of the Senate in voting for that bill. But when Senate Majority Leader Harry Reid (D-NV) attempted to schedule a cloture vote on the bill for Friday, Lee objected, which led to the debate between Cruz and Corker.

"As I have said for weeks, it is the vote tomorrow -- the vote on cloture on the bill -- that matters," Cruz argued. "Because anyone voting tomorrow in favor of cloture is voting in favor of granting the Majority Leader the ability to restore funding to Obamacare. And I know my friend from Tennessee understands that, so I'm sure his statement suggesting that the vote on the motion to proceed meant anything other than what it obviously meant, I know that was a statement in error."

Corker responded that the best course of action for Senate Republicans to support their colleagues in the House of Representatives would be to carry out the vote and send the bill back to them for more amendments.

"But it's my understanding -- again, relative to this vote tonight, happening tomorrow instead -- is that my two colleagues, who I respect, have sent out emails around the world and turned this into a show, possibly. And therefore they want people around the world to watch maybe them and others on the Senate floor. And that is taking priority over getting legislation back to the House so they can take action before the country's government shuts down."

Watch the debate, in video posted by C-SPAN on Thursday, below.