Why I hate Bridget Jones 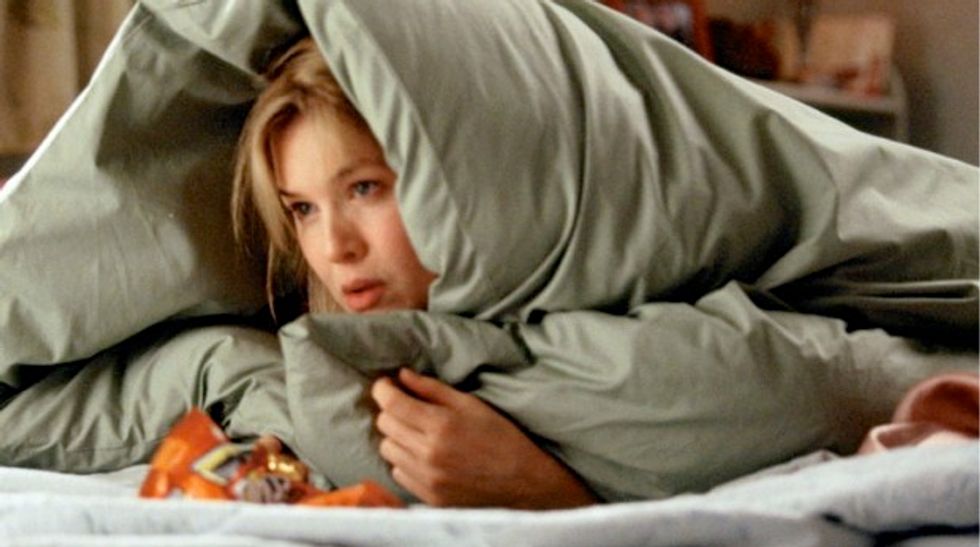 Help, Bridget's back. She's a widow but she's as vapid, consumerist and self-obsessed as ever. I don't buy this anti-feminist fiction

Calories consumed: No idea. Alcohol units: None of your business. Shisha pipes: Only 2! I am so on trend. Murdered main character: Just the one.

Bridget Jones is back. Get out the big knickers and cocktail shaker. She is now more espresso martini than chardonnay. For Bridget is everywoman, after all, isn't she? Obsessed with three of the most boring things in the entire world: dieting, trying to get a bloke and drinking and feeling bad about it. I thought she had been put out of her misery by marriage but now she is a widow. Well, at least we have bypassed the smug married phase and we can go straight back into looking for lurve. That, dear reader, is Bridget's raison d'etre, for this is what romance, romcoms or chick lit has to do.

Helen Fielding is a brilliant social observer and preceded the shopping and fucking of Sex and the City by years. She zeited the geist of the mid-90s superbly, but Bridget, never trying be too strident (offputting to men) was for me the epitome of post-feminism – vapid, consumerist and self-obsessed. Bridget's much-vaunted independence, gained on the back of the feminism of the previous two decades, manifested chiefly as the freedom to get pissed, appreciate her female friends and speak openly of her sexual desires. For that we may be grateful? Many women clearly identified with this.

In 2013 Bridget is a single mum with two kids, she has discovered nits – what took her so long? – and thigh-high boots. Probably the result of the 5:2 diet but I couldn't care less. The point is that whatever Bridget thinks of herself we must know she is desirable. And lo, she has "a toyboy".

Who is Fielding writing for now? I am her age, and I can't work it out. It may be heresy but I just never identified with her heroine in any way. The ditziness, the choice between the good man and the bad boy (Darcy and Cleaver), the overbearing parents all seemed infantilising. As for having kids, I just thought get on with it. Now she is alone again and the internet has been invented, she could have sex any time. But Bridget doesn't just want sex, does she?

Obviously Darcy had to be killed off even if the fans are upset, because this character is based on lack. The lack of a man. Lack and guilt. Bridget at 51 is more cynical, but without this quest what would her life be? Lunches, Ocado deliveries, chauffeuring children to extra-curricular activities ?

This, you may say, simply reflects real, if real life means you don't have to earn money. Especially in the movies, the aspirations and class assumptions are not hidden. Clearly, though, the identification with Bridget is the one pimped by so much media aimed at women: self-improvement as self-empowerment. Self is the key word. Go girl, at a time when women actually have less and less.

Of course Bridget can make me laugh but her confusion didn't. Still doesn't. The humour that comes from her rhetoric about being a strong independent woman is always undermined by her pseudo neurosis – waiting for the man to ring or, now she has discovered social media, to ping.

What fills the lack is self-indulgence. The promise of post-feminism after all was some Manolo Blahniks, a Mr Big or Darcy, some cracking sex toys, boozy nights out with the girls. And shopping. In the end, liberation is reduced to libido. Hey, I've still got it and hey, I am certainly worth it.

Poor Ms Jones, still hiding her cleverness, putting up with crap from Cleaver and worrying about the competitive school run. Sorry, I am not buying this fiction. The fiction is that post-feminism is not in fact anti-feminism.

The fiction is that self-obsession is funny because collective struggles are a thing of the past. But this is Bridget Jones, not Emma Goldman. It's not my bag. And guess what? I don't feel guilty about this in any way.