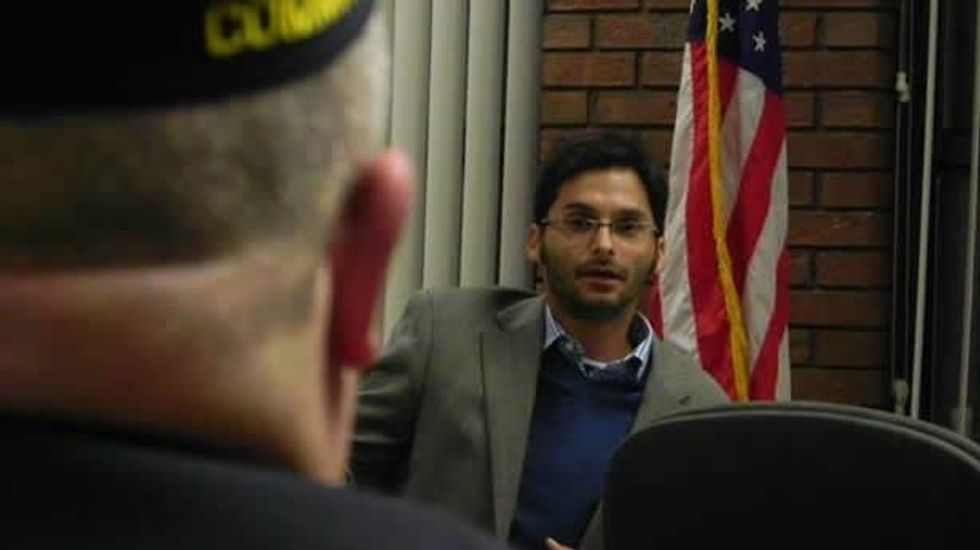 An Illinois American Legion post announced last week that it had decided to withhold financial support for the Morton Grove Park District because an atheist park commissioner refused to pledge allegiance to the United States flag "under God."

At a Thursday park board meeting, Post 134 Commander Joseph Lampert told Commissioner Dan Ashta that Legion members did not "accept" his right not to stand for the Pledge of Allegiance -- even though many veterans had died to protect that right.

"On behalf of our post, it is with some regret that we fully respect the right of individuals to not stand during the pledge of allegiance," Lampert said. “All veterans have been willing to lose their lives for that right, and many have. With that being said, while we support that right, we do not accept it."

"Regrettably, we will be withholding funds from the park district until such time that everyone rises for the pledge," he added. "We feel that it’s disrespectful to all veterans that have been willing to sacrifice their lives for this country and it is a great dishonor to all servicemen and women who have paid the ultimate sacrifice and died for this country.”

According to the Morton Grove Champion, Post 134 had paid $300 to sponsor they yearly Easter Extravaganza and $300 for the Halloween Family Festival. In addition, it had spent $1,000 each year on the Party in the Park events and $1,000 on the Fourth of July fireworks.

Ashta pointed out that the First Amendment of the United State Constitution afforded citizens the right not to speak.

"This section of the agenda says Pledge of Allegiance, and I feel like we’re compelling people to speak," Ashta explained. “So you either stand up and say it or you don’t, but either way you’re making a statement. If you come to the meeting, you don’t have a choice but to make a statement.”

“I’m not entirely sure it’s accurate to say this is a personal choice, but more of a duty. I have an obligation as an elected official to uphold the constitution,” he continued. “I have a sincere, serious relationship with the law. I study law and constitutional law is of particular interest to me. I think the Constitution is what makes this country great and worth making sacrifices for. Countries with weak constitutions usually don’t last.”

“It really saddens me when I hear people say that they think what I’m doing is disrespectful... I do appreciate the sacrifices people have made so that I can be here at this meeting. I don’t want to make anyone uncomfortable. I have no objections to people who do stand for the pledge.”

Photos, audio and video of the meeting were first posted on the North Shore Voice Facebook page.