Another New Jersey Rep. slams GOP during Obamacare hearing: 'You call that cooperation? I don't' 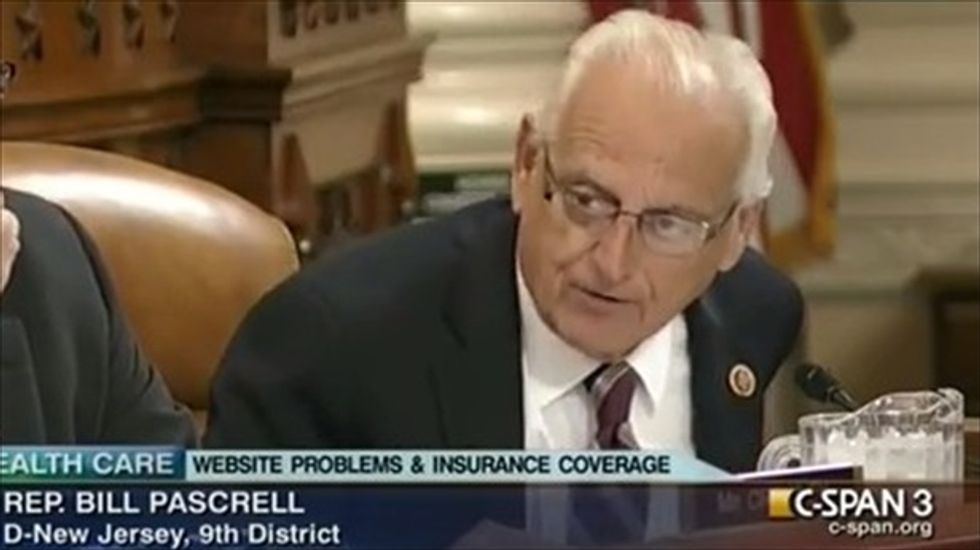 Rep. Bill Pascrell (D-NJ) lit into his Republican colleagues on Tuesday during a House Ways & Means Committee hearing concerning the Affordable Care Act (ACA), calling out their continued resistance to the law and challenging them to confront those potentially affected by their threats to defund it.

"What are you going to do about the approximately 17 million children with pre-existing conditions who can no longer be denied health insurance coverage?" Think Progress quoted Pascrell as saying. "We want to go back and want to say, 'You are no longer covered any longer.' Are you going to tell the parents of those kids? Which one of you's gonna stand up and tell the parents of those children, 'The game is over, sorry.'"

Pascrell also criticized the GOP for refusing to work with President Barack Obama's administration, compared to Democrats who showed their willingness to do so with Obama's predecessor, George W. Bush.

"How many of you stood up to do that?" Pascrell demanded after standing up. "None. Zero. Zero. Let's talk. Let's not water the wine here. Let's say it like it is."

Rep. Tim Griffin (R-AR) pushed back against Pascrell, describing his argument as "a false choice, to say it's Obamacare or nothing" and arguing that there were "numerous alternatives," including one he had co-sponsored. Think Progress reported that Griffin endorsed the American Health Care Reform Act on Oct. 24. Unlike the ACA, that bill would allow insurers to deny patients with pre-existing conditions, while also providing $25 billion in federal funding for "high-risk" patient pools over 10 years.

"Are you serious, what you just said?" Pascrell replied, leaning over his desk. "Are you really serious? After what we have gone through, what we've gone through in the last three and a half years? You can sit there and say, that you had a legitimate alternative after these years? We’ve gone through 44 votes, 48 votes now, of you trying to dismantle the legislation. You call that cooperation? I don't."

Watch Pascrell take Griffin and the GOP down, as posted on Tuesday by Think Progress, below.