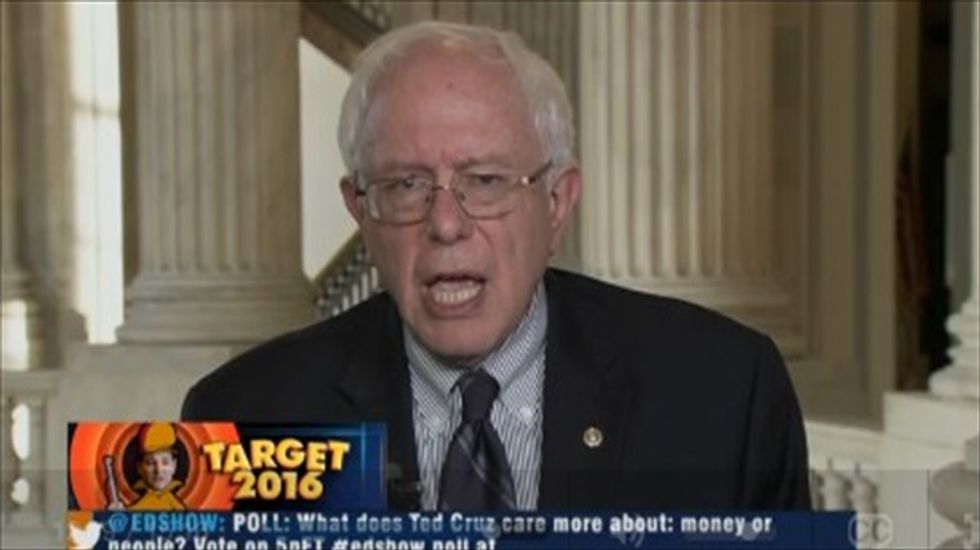 Not only do conservative funding sources like the Koch brothers and Sheldon Adelson have the ability to spend "hundreds and hundreds and hundreds of millions of dollars" on campaigns, Sanders argued, but what Cruz is pushing for the stripping of limitations from individual donations, as well.

"Ultimately, what they are about is creating a campaign finance system where billionaires can spend unlimited sums of money on campaigns and candidates electing the people they want," Sanders told Schultz. "That is not, in my view, a democracy. That is called oligarchy, where a nation is run by a handful of billionaires."

Cruz has publicly warned Wheeler, who was appointed by President Barack Obama, that the FCC should not, in his opinion, exceed its mandate and require individual donors to reveal their contributions. Cruz is reportedly setting up a private meeting with Wheeler to discuss the issue. The Tea Party senator is also an opponent of the DISCLOSE Act, which would require outside groups like unions, corporations and political action committees to notify the Federal Elections Commission when they spend more than $10,000 to air campaign ads.

Sanders also criticized Cruz for opposing an FCC-backed proposal that would call for publishing the sources of political ad buyers in the country's 50 biggest television markets.

"In my view, we should see that, not only in the 50 largest markets, but all over this country, not only on television, but on radio" Sanders said. "Bottom line here is, what Senator Cruz and his friends want is a campaign system where a few billionaires can spend unlimited sums of money without any disclosure at all."

Watch Schultz's interview with Sanders, as aired Monday on MSNBC, below.