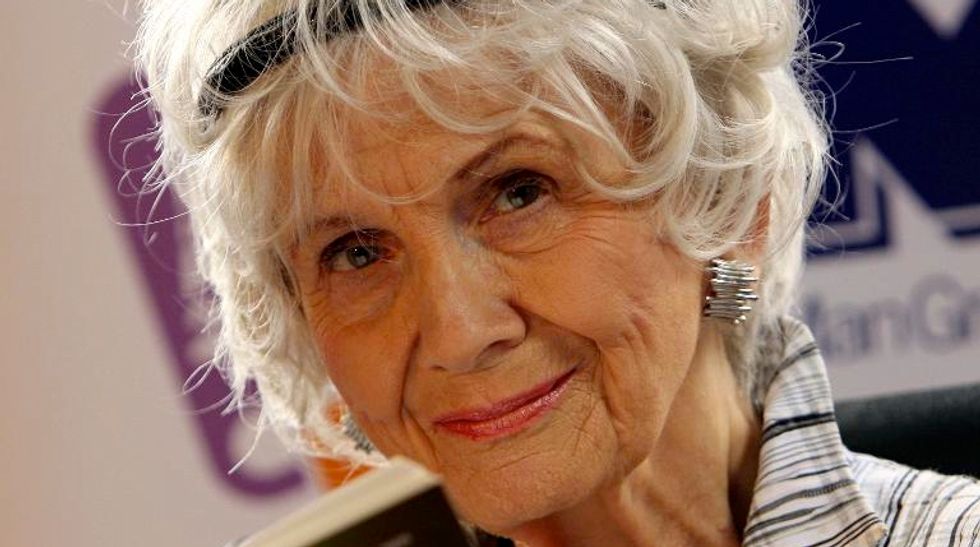 She is just the 13th woman to win the coveted award, and the first Canadian.

The Swedish Academy described Munro, 82, as a "master of the contemporary short story", a genre that has only rarely been honoured with the world's most prestigious literary award.

It hailed her "finely tuned storytelling, which is characterised by clarity and psychological realism. Some critics consider her a Canadian Chekhov."

"Her stories are often set in small town environments, where the struggle for a socially acceptable existence often results in strained relationships and moral conflicts -- problems that stem from generational differences and colliding life ambitions," it said.

The collection "Hateship, Friendship, Courtship, Loveship, Marriage" (2001) became the basis of the film "Away from Her" from 2006, directed by Sarah Polley. Her most recent collection is "Dear Life" (2012).

At just 11 years old, she decided she wanted to be a writer, and never wavered in her career choice.

"I think maybe I was successful in doing this because I didn't have any other talents," she once said in an interview posted on YouTube.

"I'm not really an intellectual," Munro said. "I was an okay housewife but I wasn't that great. There was never anything else that I was really drawn to doing so nothing interfered in the way life interferes for so many people."

Her focus on the activity of writing means she is not the kind of writer who revels in book-signing events or other publicity work.

When the Swedish Academy announced it had awarded her the Nobel prize on Thursday, it had still not been able to reach her.

"She is not a socialite. She is actually rarely seen in public, and does not go on book tours," commented American literary critic David Homel.

Munro herself has said she writes about the "underbelly of relationships".

She said she sets her stories in Canada “because I live life here at a level of irritation which I would not achieve in a place that I knew less well".

"There are no such things as big and little subjects," she has said. "The major things, the evils, that exist in the world have a direct relationship to the evil that exists around a dining room table when people are doing things to each other."

In 2009, Munro won the prestigious Man Booker International Prize for her body of work

Tipped as one of the favourites in the days before Thursday's announcement, Munro is just the 13th woman to win the Nobel Literature Prize since it was first awarded in 1901.

The last woman to receive it was Herta Mueller of Germany in 2009.

She is also the first Canadian to win the prestigious honour. Saul Bellow, who won the Nobel Literature Prize in 1976, was born in Canada, but later became a US citizen.

She will be presented with her award at a formal ceremony in Stockholm on December 10, the anniversary of prize founder Alfred Nobel's death in 1896.