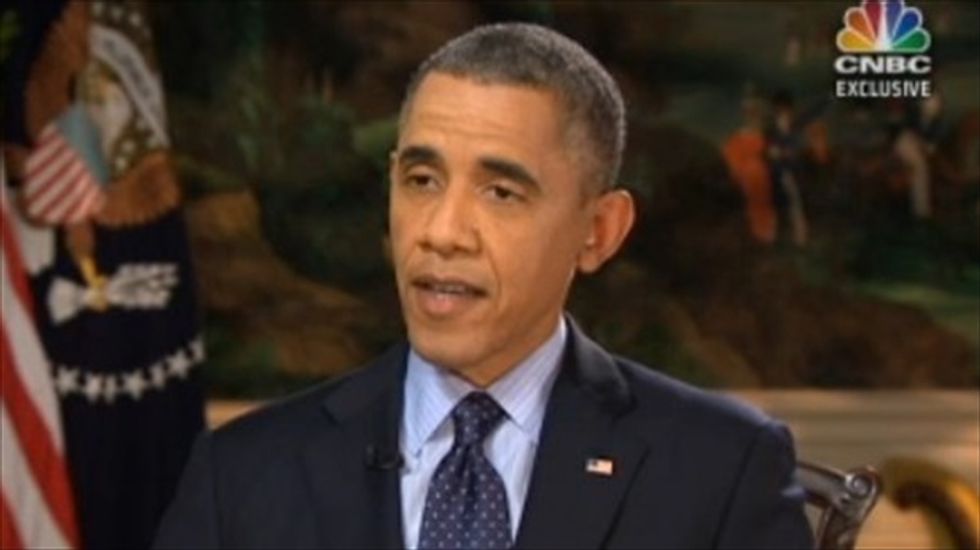 US President Barack Obama sent Wall Street a blunt warning Wednesday that it should be very worried about a political crisis that has shut down the government and could trigger a US debt default.

Obama said he was "exasperated" by the budget impasse in Congress, in an interview with CNBC apparently designed to pressure Republicans by targeting the financial community moments after markets closed.

Obama was also set to meet Republican and Democratic leaders for their first meeting since the government's money ran out and it slumped into a shutdown now well into its second day.

Asked whether Washington was simply gripped by just the latest in a series of political and fiscal crises which get solved at the last minute, Obama warned that investors should be worried.

"This time's different. I think they should be concerned," Obama said, in comments which may roil global markets.

"When you have a situation in which a faction is willing potentially to default on US government obligations, then we are in trouble," Obama said.

Obama said he would not negotiate with Republicans on budget matters until House lawmakers pass a temporary financing bill to reopen federal operations and raised the $16.7 trillion dollar debt ceiling.

If the borrowing limit is not lifted by the middle of the month, the US government could default on its debts for the first time in history.

"If and when ... that vote takes place and the government reopens, and if and when they vote to make sure Congress pays our bills on time so America does not default on costs it's already accrued, then I am prepared to have a reasonable, civil negotiation around a whole slew of issues," Obama said.

The president said he had "bent over backwards" to accommodate Republicans -- a statement his foes would dispute -- but warned it would set a terrible precedent to allow lawmakers of any party to hold a White House to ransom over raising the debt ceiling.

"Absolutely I am exasperated, because this is entirely unnecessary," Obama said.

Obama wants a straightforward temporary spending bill to end the first shutdown in 17 years, while Tea Party Republicans have repeatedly tied the measure to a dismantling or delay of his signature health care law.

With neither side willing to budge, hopes of an early exit to the shutdown are fading.

"Most of the time you can see an end game," Republican Senator Johnny Isakson told MSNBC. "Right now there's no end game in sight."

Some signs of incremental movement emerged, with Democrats pledging to appoint negotiators to thrash out a long-term budget -- provided that the Republicans agree to an immediate six-week federal spending measure with no anti-Obamacare provisions.

All eyes will turn to the White House at 2130 GMT when Obama meets in the Oval Office with his chief political rival, House Speaker John Boehner, as well as top Senate Republican Mitch McConnell to address the standoff.

Boehner's office said the fact the talks were taking place was a victory in itself and had the potential to lead to "serious talks between the two parties."

European Central Bank chief Mario Draghi warned Wednesday that a US shutdown "is a risk if it is protracted."

"It would be a risk not only for the US, but also the world economy," Draghi said.

Obama on Wednesday gathered a group of high flying CEOs, apparently hoping they would pressure Boehner to pass a straight temporary funding bill.

Goldman Sachs boss Lloyd Blankfein warned that America was getting onto dangerous ground by flirting with not raising the debt ceiling. A previous period of brinkmanship on the issue badly hit the US credit rating.

Furious tourists meanwhile are locked out of Washington museums and monuments, as well as national parks and landmarks like the Statue of Liberty in New York. Cancer research and treatment at the world-class National Institutes of Health has ground to a halt.

The fallout has already caused Obama to shorten his long-planned Asia trip, scrapping stops in Malaysia and the Philippines that were due to begin this weekend, so he could attend to the crisis at home.

The president's attendance at regional summits in Indonesia and Brunei was also in doubt.

Watch the interview, aired on CNBC on Wednesday, below.