For Republicans, federal workers are nothing but ideological pawns and punching bags 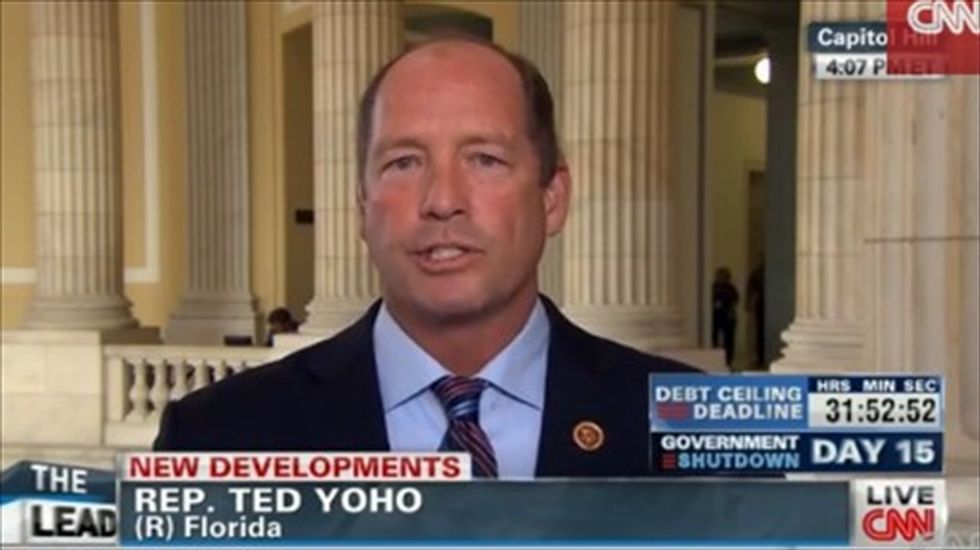 Rep. Ted Yoho (R-FL) says creditors 'would thanks us' if U.S. went into default [CNN]

In a just universe, America's civil servants would be back at work and Congress would be on indefinite furlough.

Federal workers don't create budget crises, yet whenever we have one, they're the ones getting screwed. This time is no different. They can take some comfort in the rock-bottom approval ratings for Congress – currently hovering somewhere between hemorrhoids and Charles Manson – and specifically for the House Tea Party caucus that precipitated the shutdown. But this is an old story: we all hate Congress, but love our own representatives. Members of Congress don't answer to national polls, they answer to their constituents. And thanks to redistricting, a large chunk of the House Republicans are insulated in ultra-conservative districts that have been gerrymandered to a point beyond all recognition to the rest of the country (while the remainder live in fear of getting challenge in the primaries if they don't go along with the former's reckless endeavors).

This is why Representative Ted Yoho, described by the New York Times as "a freshman Florida Republican who had no experience in elective office before this year [who] said the largest economy on earth should learn from his large-animal veterinary practice", suggested "if they're not working, they shouldn't get paid", regarding those federal workers he helped put out of work. Yoho wasn't just spouting off; he was at a town hall meeting responding to a caller from his home district who complained about the federal workers "at home watching Netflix or whatever", as if being furloughed had been their choice.

In the end, even Congressman Yoho went along with the rest of the House, which unanimously voted to provide back pay to furloughed workers whenever the shutdown ends. But the promise of a check at some uncertain, future date doesn't cover rent, groceries or electricity bills now for the 800,000 workers affected, many of whom live paycheck to paycheck. Federal workers have reported taking out loans, selling possessions on eBay, and getting second jobs (the Department of Energy helpfully posted guidelines for moonlighting: bartending is OK, lobbying for energy companies is not). In a member survey by the National Treasury Employees Union, 84% reported cutting back (pdf) on necessities, and nearly half have delayed medical treatment to save money.

The shutdown has put tremendous financial stress on my family. There's no money coming in. In September my husband was laid off, and I was furloughed the first of October. And if the VA doesn't get any money, I won't get my disability check at the end of the month.

As for back pay, "I'll believe it when I see it." Lytle notes that as a result of the EPA shutdown, cleanup at a nearby superfund site in Waukegan (the former location of a large outboard-boat-motor manufacturing plant and a former railroad tie, coal gasification, and coke plant facility) has stopped.

Yet it's not just a matter of a handful of stubborn legislators. Politicians like Yoho reflect a nasty political current within a part of the American electorate: that civil servants like Lytle are not real workers, that they don't matter, that their livelihoods are expendable for the sake of some broader ideological agenda.

It's reflected by conservative radio host Laura Ingraham gloating "Starve the beast!" in response to furloughs at the IRS, by Tea Party protesters heckling White House police with calls of "brownshirts" and "Stasi".

Starve the beast! "@politico: Furloughs to shut down IRS for a day: http://t.co/eKANDoRnpN"

It could be seen during the last round of furloughs resulting from sequestration (for which workers did not receive back pay), when Fox News' Neil Cavuto wondered out loud if this isn't a good thing:

Maybe we have too many federal workers in the first place period, if there's any place to cut it's got to be there.

Civil servants make a handy punching bag. They're to blame for deficits, although total expenditures on federal employees (both civilian and military) make up about 13% of the federal budget far less than Social Security or Medicare, and, according to Treasury Secretary Jack Lew, firing every single federal worker in the country would only shrink the deficit by a third. It's an easy sell to balance budgets on the backs of civil servants: the last budget crisis resulted in federal workers being denied cost-of-living raises for the third straight year, along with agency budget cuts and layoffs. In their competing budget proposals, both President Obama and Paul Ryan agreed to cutting federal employee retirement benefits; the only question is by how much.

Bureaucracies are easy to despise when they make us wait at the Department if Motor Vehicles and take for granted when they fix the roads, but no society of laws can function without one. Now that veterans' and Social Security claims are going unprocessed, food is not being inspected, parks are closed, and Head Start programs are not staffed, maybe the anti-government caucus will change its tune. But don't count on a salmonella outbreak or two changing much. Things might be different if voters elected more federal workers to Congress.