For The Misogynist Trolls: Your Repulsive Personality Is Not Inevitable 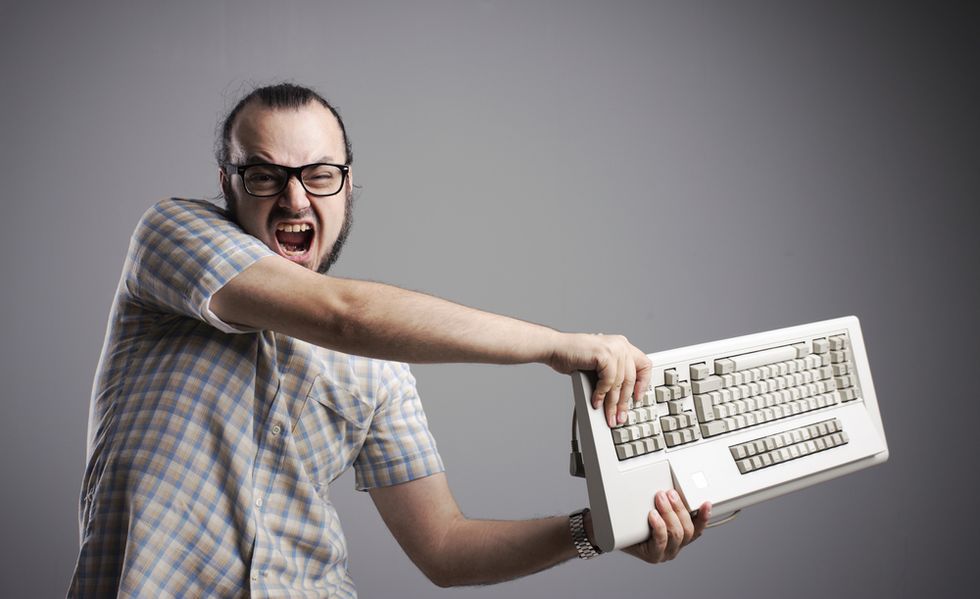 An angry man swinging a computer keyboard (image via Shutterstock).

Our recent troll infestation---which was conducted, as many are, by trolls who wait until a Friday night because they know that the moderators, unlike themselves, are probably offline socializing and maybe even having sex---was an unpleasant reminder that a lot of the angry, entitled dudes described in the post blame feminism because they can't get all the sex they think they deserve. The recent Facebook page threatening-by-pretending-not-to-threaten sex positive atheist blogger Miri Mogilevsky demonstrated a similar obsession. In particular, there was a weird obsession with Miri's sex life, the usual "jokes" about how a woman who is sex positive must be fucking everyone (but the person angrily freaking out about this, of course) and the suggestion that the penalty for being sexually liberated, for a woman, should be death. (The page appears to be down now, but there was, unfortunately, the initial tendency to take the side of angry dudes over feminists in the Facebook response at first.*) The sexual resentment of Miri is particularly noteworthy in this case. Since her online presence is optimistic and cheerful, even the most aggressive protests that it's about her personality are going to fall flat.

Per usual, I am perplexed by the entire hobby of freaking out on feminists because your own repulsive personality makes obtaining sexual attention difficult. I get that feminists sometimes make an attractive target: Having been told your whole life by conservative forces that feminists are haggard man-haters who are bitter because they can't get a man, finding out how many are actually well-adjusted people who are certainly doing better in the sex department than you can be disconcerting. However, that doesn't make the feminist hate rational, and since so many of the haters clearly think of themselves as rational men here to tell the little ladies, the fact that they don't even pause to consider how irrational it is to dump all their bitterness on feminists is particularly comical. Feminists aren't the problem. Feminists aren't plotting to keep the hot young women of OK Cupid from responding to your emails explaining that you are a Nice Guy® and if they don't respond, it's clearly because they, like most women, are shallow, money-grubbing bitches. It's not like, prior to 1964, men were just assigned a woman and she had to be nice to him and have sex with him whenever he wanted, no matter what. Even then, women were free to notice that you are repulsive and unattractive and move on. In fact, because of the forced economic dependency that was created by the cult of housewifery, a lot of women put more emphasis on men having the money that the haters believe is the sole reason they aren't elbow deep in 22-year-old pussy right now.  Feminism, if anything, made it so that men who don't necessarily have money but have other attributes---charm, good looks, a sense of humor, intelligence, all sorts of stuff---have more of a chance, because women are more free to follow their hearts if they pay their own bills.

As I've pointed out over and over again while wielding the banhammer, if the haters took the time they spent hating feminists and creating threatening anti-feminist Facebook pages, and instead put that time towards self-improvement, they might actually find their sexual prospects brightening. Probably not with 21-year-old club girls, but there are a lot of women out there! Simply not being a repulsive choad and take you a long way. But the message isn't sinking it.

I realize that part of the reason is that I, because of my desire not to 'splain things that I think you already know, have never articulated what kind of self-improvement project that misogynists could take on instead of trolling feminists online. But their rising levels of hate and frustration have made it clear that they may just not know! So, in interests of making life more pleasant for everyone around, I compiled a list of self-improvement projects to turn you from a bitter asshole who repels women to someone who can get a date and is less interested in blaming feminism for all your problems. Next time you feel the urge to waste time trolling feminists online, try one of these projects instead!

You believe women are supposed to be compliant fuckbots with no inner motivations and desires besides pleasing you specifically. Women, understandably, find that attitude to be gross and stay away. But learning that women are people and that's okay isn't as hard as it seems!

I know a lot of you think that if a man isn't an "alpha" (whatever that means) or swimming in cash, he's basically hopeless on the dating market. You think this because you're hopeless on the dating market, and instead of reasonably realizing it's your sour attitude, misogyny, and seething bitterness that's the problem, you think women have X-ray eyes and can see into your wallet. You've also convinced yourself that while you deserve to have someone with a tight ass and a nice wardrobe, if you make any gesture towards being more attractive, you're just feeding women's evil shallowness. They should love you the way you are, and to prove that, you're going to live in filth!

Well, I'm here to say that you can't convince people to care about you if you don't care for yourself. Start holding yourself to the care and grooming standards you hold women to, and you might actually find women don't recoil from you at first sight.

I realize a lot of you read "pick-up" manuals and blogs and think that you've developed social skills, but most of the time, the answer is no. The "pick-up" community is based on a single, false premise: That women are non-human animals that have to be understood as a separate species. It's closer to the philosophy of dog training and less about learning how to be a genuinely skillful social person. True social skills start with understanding that other people---even women!---have desires and feelings just like you, and behaving accordingly.

These are all good alternatives for your free time for your hobby of hating on and trolling feminists. And unlike your current obsession, practicing these skills will actually help get you to a place where the problem that drives you to hate on feminists so much will actually start to go away. Being a fun, interesting, likeable person is so much better than being a misogynist bore, both for your soul and for your prospects on the dating market.

Of course, if you main interest is coming up with as many ways as you can to let rapists off the hook for raping and to find reasons to blame the victims, well, you have problems that run much deeper than anything on this list will probably help you with.

*What I don't get and will never get is why is it so hard for moderators in this situation to apply the simple "What if this was being said about my wife/sister/mother/daughter?" test. There's a lot of problems with that test, of course, as many feminists have pointed out that it still defines women's worth as in relation to men, as opposed to intrinsic to ourselves. But as a rough test to keep men honest and keep them from overly sympathizing with horrible people just because they share a gender with them, I do think it's useful. It should be Moderation 101 to ask yourself this question before you blow off deleting the offensive content.