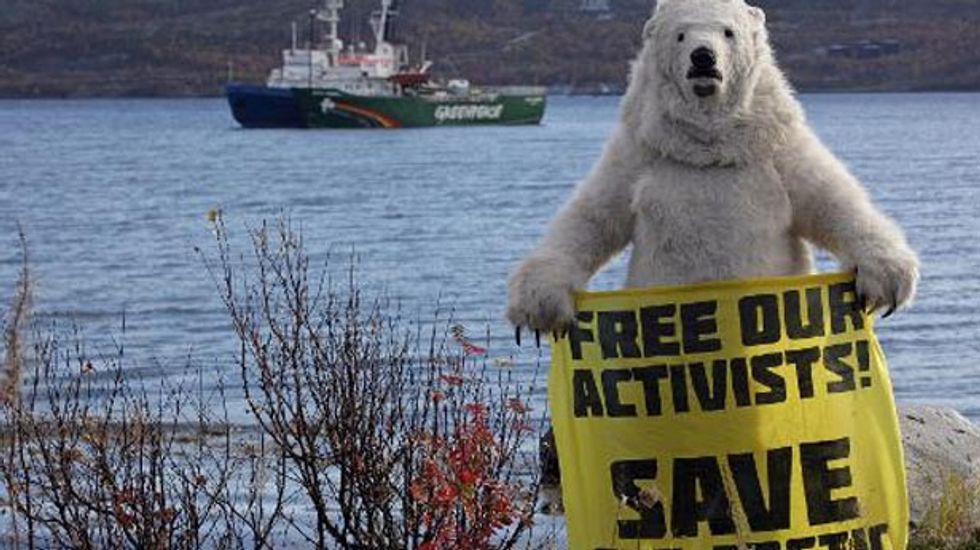 Greenpeace supporters held vigils across the world Saturday in support of 30 activists jailed by Russia after a protest against Arctic oil drilling, sparking a new row between Moscow and the West.

Pressure has been mounting on Russia from both activists and governments shocked by Moscow's decision to level full-blown piracy charges against Greenpeace's Arctic Sunrise crew.

But Moscow displayed few signs of leniency on Saturday as it hit out at both Greenpeace and the Dutch government under whose flag the environmental lobby group's ship sailed.

"Everything that happened with the Arctic Sunrise is a pure provocation," Russia's Deputy Foreign Minister Alexei Meshkov fumed.

The 950-tonne icebreaker was impounded by Russian authorities last month after it approached the world's first oil rig in the pristine Barents Sea -- the focus of energy companies from around the world.

A court in Russia's northwestern region of Murmansk has since charged all crew members -- who come from 18 countries including Britain and the United States -- with charges that carry jail terms of up to 15 years.

The incident has set off a burgeoning diplomatic effort to secure the activists' release despite Russia's tough stance.

The Netherlands broke more than two weeks of silence about the case on Friday by starting legal action aimed at quickly freeing the crew.

Russia's Meshkov fired back on Saturday that the Netherlands had been repeatedly warned about the dangers of the ship's actions.

"In the past year-and-a-half, Russia has asked the Dutch side on many occasions... to forbid this ship's actions," Meshkov told the RIA Novosti news agency.

"Unfortunately, this was not done. So now we have many more questions for the Dutch than they have for us."

But several governments now appear ready to add the Greenpeace detentions to their grown log of complaints about Russia's treatment of human rights issues under President Vladimir Putin.

Australian Foreign Minister Julie Bishop said she expressed concern about her country's crew member during talks with another Russian deputy foreign minister on the sidelines of a regional forum in Bali.

Bishop added that Australia was looking into whether the "very serious charge" was appropriate.

The US State Department also said it was "monitoring the case very closely."

The Greenpeace crew includes a British videographer and a Russian freelance photographer who once worked for AFP.

The ship was captained by Peter Willcox -- a veteran US environmental campaigner who was also at the command of the Rainbow Warrior when that Greenpeace ship was bombed and sunk by French secret services in New Zealand in 1985.

"The activists were taking a brave stand to protect all of us from climate change and the dangers of reckless oil drilling in the Arctic," Greenpeace International's executive Kumi Naidoo said on Saturday.

"Now it?s imperative that millions of us stand up with them to defend the Arctic and demand their immediate release."

The global day of solidarity kicked off in New Zealand and stretched across Russia and Western Europe before its expected conclusion outside Moscow's science and culture centre in Washington.

Activists in Moscow held a small vigil near the iconic Gorky Park during which they held up posters with photographs of the detainees.

Supporters were also asked to come together outside former apartheid detention centres in South Africa.

Greenpeace sympathisers in the Hague were to march to the International Court of Justice demanding a swift global response.

And still more activities in solidarity with the crew were planned for London and Madrid as well as Paris and a dozen other towns across France.

Demonstrations in Germany were expected across 48 cities and focused on Hamburg and Berlin.