Jon Stewart to red states: 'What do you hate more? Poverty or Obama?' 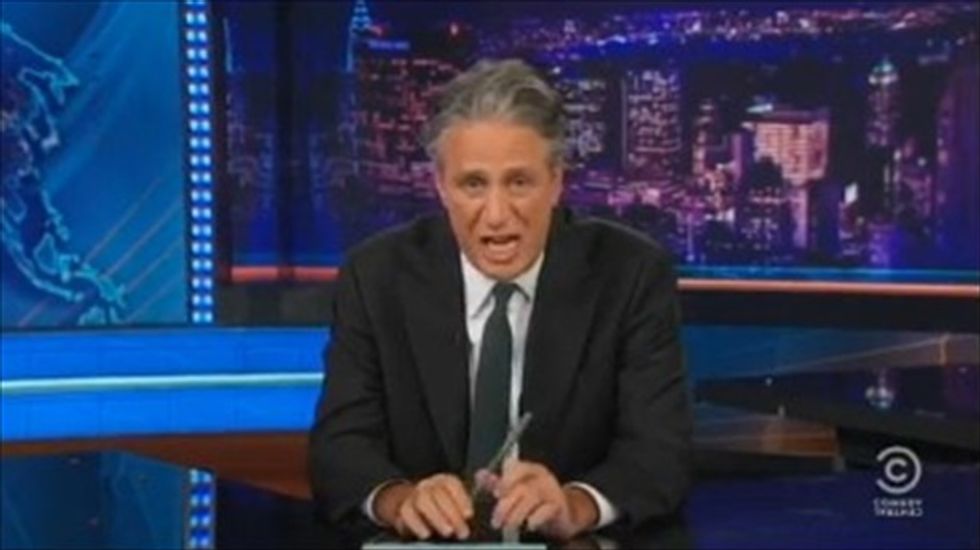 Tonight on The Daily Show, Jon Stewart took a pitchfork to states that refused federal money to expand Medicaid programs.

The federal government offered to pay for the programs until 2020, but 26 states declined the offer.

"Twenty-six states?" an exasperated Stewart asked. "Twenty-six states? They must be a pretty eclectic group with many different reasons to explain why they would turn down federal money to bring healthcare to their working poor ... or maybe there was just one reason."

The show then cut to a clip of a reporter saying "[a]ll of those states have Republican governors, or legislatures that are controlled by Republicans."

"Oh," Stewart replied, "which makes this just the latest example of that hit game show that's sweeping the nation, 'What Do You Hate More: Poverty or Obama?' Brought to you by 'Spite,' the emotion that will make you turn down millions of dollars to help the working poor because you hate the president."

"And Arby's, because technically, it's food."

Stewart then lit into Texas governor Rick Perry, who said that expanding Medicare is like "adding 1,000 people to the Titanic."

"That's true," Stewart said, "that's true ... if the Titanic had crashed into a

He then mocked Mississippi legislators who claimed that, despite being "the 49th healthiest state in the Union," Obamacare "is the worst system of delivering healthcare known to man."

Stewart then turned to Missouri, whose state Sen. John Lamping claims can't help the working poor because Medicaid already takes up one-third of the state's budget. "We can barely afford to be in the Medicaid program as it exists today," Lamping said.

"Boy, that is a tough choice," Stewart responded. "Should we, as a state, accept 100 percent of the state's cost from the federal government or should we, well, yeah, f**k you."