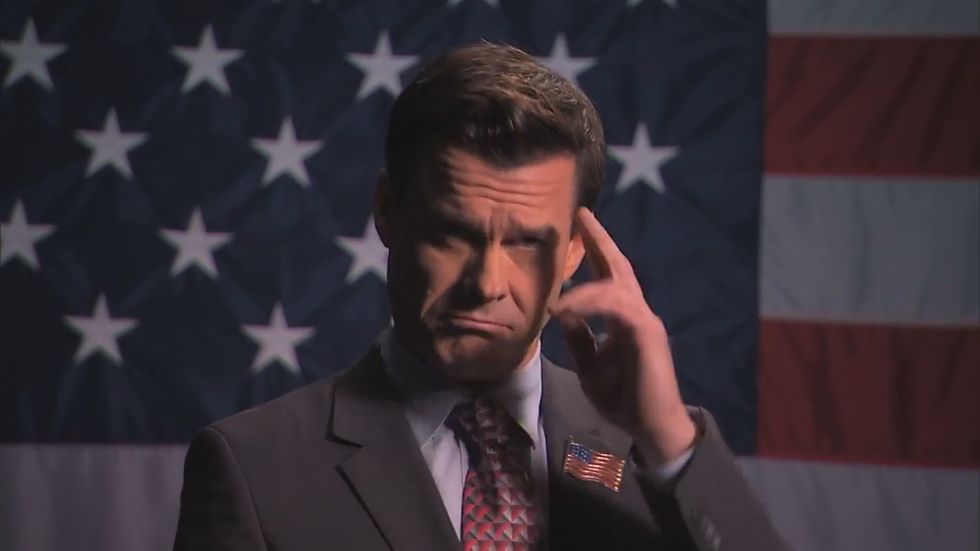 Late night host Jimmy Kimmel lampooned the divide within the Republican Party on Tuesday with a parody commercial where a tea party Republican and a "moderate" Republican try to share the screen.

Kimmel noted that President Barack Obama had been hopeful that Congress would soon end the government shutdown and raise the debt ceiling.

"The problem is that the Republicans in the House can't even agree between themselves on what they want," the late night house explained. "There's a major rift in the Republican Party between the moderates and the tea party. Not only is it making compromise in Washington very difficult, the signs of discord are even starting to seep into their political ads."

"We believe in the principles America was built on," the moderate begins. "Capitalism, free enterprise, individual initiative. We believe that every American should have the opportunity to succeed."

"Except the ones that snuck over the border to take our jobs," the tea partier interrupts. "We need to ship them the hell out. Sayonara, amigos."

"I think you mean, adios," the moderate points out. "Adios, amigos."

"No, I don't," the tea partier replies. "I speak English, just like Jesus Christ."

"Jesus Christ," the moderate mumbles in agreement. "We fight for lower taxes and less-burdensome regulation."

"And to kick that half-breed out of the Oval Office before he turns America over to the Al-Kenya," the tea partier insists.

With that, the advertisement devolves into a fist fight and the spot ends by noting that the Republican Party is "available at Walgreens."