Maddow guest: Republicans are 'flying totally blind' at this point 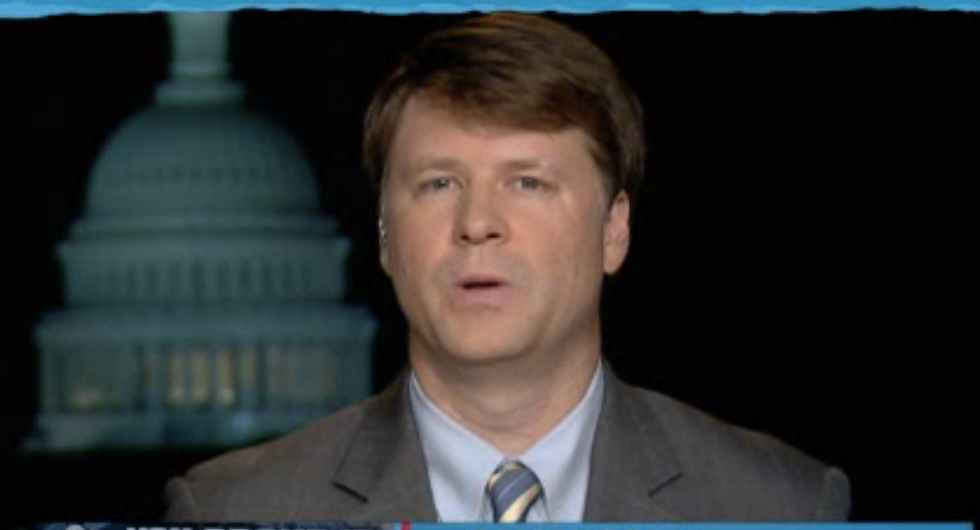 Monday night on "The Rachel Maddow Show," host Rachel Maddow examined the possibility of a Republican endgame in the shutdown of the U.S. government. The shutdown itself has revealed a fractured Republican caucus and shown Speaker of the House Rep. John Boehner (R-OH) to be a weak and ineffective leader. Maddow and guest Ryan Grim said that Boehner is becoming increasingly frantic to find a solution as the shutdown grinds into its second week and that the party is "flying totally blind."

Maddow began the segment by telling the story of the rise of North Carolina's Rep. Mark Meadows, the "Birther" congressman who represents parts of the city of Asheville. Meadows was the originator of a letter signed by multiple members of the tea party caucus that demanded that Boehner shut down the federal government.

"It is amazing to think that a brand new freshman member of Congress with no national profile, no additional position of power, no apparent influence at all beyond his seat could get 80 members of Congress to sign on to a letter like that," said Maddow.

"What is more amazing, conservative groups started running targeted advertisements against 100 other Republicans who did not sign on to the Mark Meadows letter. Impressive, right? This guy who nobody had ever heard of last year is punching really, really far above his weight," she continued.

This is not to say that Meadows is "an unusually effective freshman member of Congress," but rather highlights the historic weakness of Speaker Boehner, that a relatively small but obstreperous splinter group of House Republicans can end up giving marching orders to the whole party.

Maddow went on to highlight a New York Times piece from the weekend which detailed that the path to the shutdown began shortly after the re-election of President Barack Obama and was bankrolled and supported by billionaire oligarchs Charles and David Koch.

Maddow then welcomed Ryan Grim, DC bureau chief for Huffington Post, who, when asked what he thinks of current Republican strategy said that "strategy" might be too strong a word for what the GOP has undertaken.

"They didn't have any strategy going forward," said Grim. "You know, 'repeal Obamacare' is not an actual strategy. That's not going to happen. Republican leadership never wanted to get to this point. So, this isn't their strategy either."

With no map and no real sense of how to get back out of the shutdown, said Grim, Republicans are "spitballing."

"I mean, they're, they're flying totally blind," he said. There are hopes in Boehner's camp that some kind of short term solution can be worked out to bring the White House to the negotiating table.