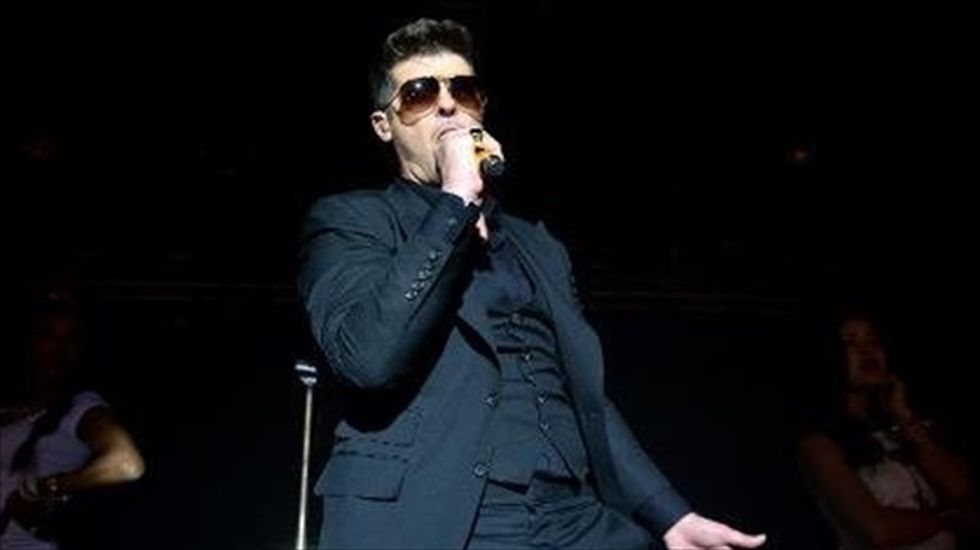 The estate of late soul icon Marvin Gaye has hit back at R&B star Robin Thicke in the latest twist to the legal saga surrounding the singer's smash-hit "Blurred Lines."

Gaye's estate has filed a counter-claim to a pre-emptive suit lodged by Thicke and Pharrell Williams in August which had asked a California court to rule that the chart-topping hit had not lifted melodies from Gaye's 1977 classic "Got to Give it Up."

But Gaye's family argue in court papers filed in Los Angeles that Thicke's hit amounts to "blatant copying of a constellation of distinctive and significant compositional elements of Marvin Gaye's classic #1 song."

The family of the singer also pointed to interviews given by Thicke to GQ magazine and Billboard in which he cites "Got to Give It Up" as the key inspiration for the song.

"Pharrell and I were in the studio and I told him that one of my favorite songs of all time was Marvin Gaye's 'Got to Give It Up'," Thick was quoted as saying by GQ earlier this year.

"I was like 'Damn, we should make something like that, something with that groove.' Then he started playing a little something and we literally wrote the song in about a half hour and recorded it," Thicke added.

The court filing by Gaye's family, quoted an interview given by Thicke since the legal furore unfolded in which he appears to flatly contradict his earlier comments.

Asked directly by the TMZ entertainment news website if he had been thinking of Marvin Gaye when "Blurred Lines" was composed, he replied: "No."

In addition, the Gaye estate's court case cites several prominent music critics who have all remarked about the song's similarity to "Got to Give It Up."

The countersuit also challenges Thicke beyond "Blurred Lines," claiming that his song "Love After War" had drawn heavily on Gaye's "After the Dance."

Thicke, Williams and T.I. had filed a pre-emptive strike in August seeking to quash any potential claims by Gaye's estate.

"There are no similarities between plaintiffs' composition and those the claimants allege they own, other than commonplace musical elements," papers filed by Thicke's attorneys said.

"Plaintiffs created a hit and did it without copying anyone else's composition.

"Being reminiscent of a 'sound' is not copyright infringement. The intent in producing 'Blurred Lines' was to evoke an era," it added.

"The reality is that the songs themselves are starkly different.