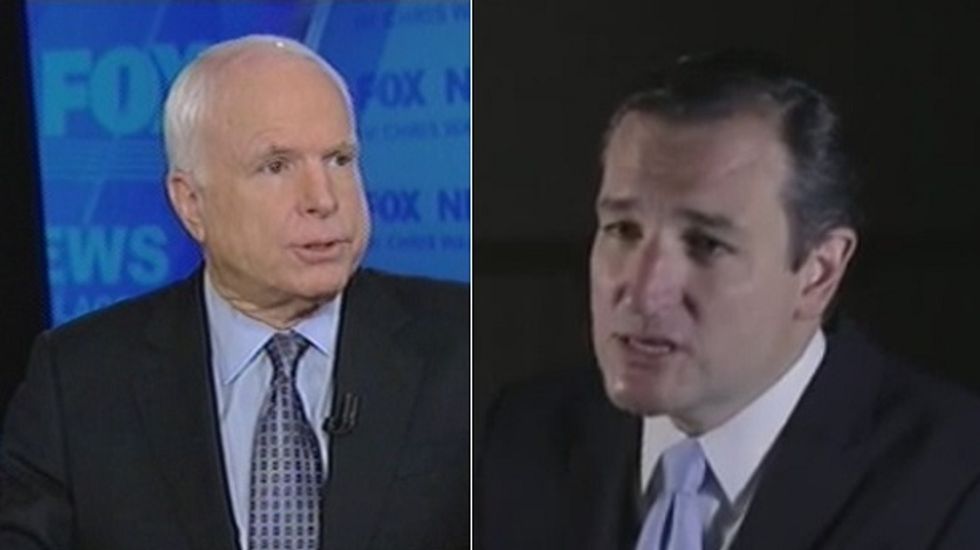 The battle within the Republican party highlighted by the recent government shutdown has damaged the party, hurt innocent Americans and taken attention away from the "fiasco" of the rollout of Obamacare, Senator John McCain said on Sunday.

Ted Cruz, the first-term senator from Texas who led the charge by the party's rightwing Tea Party faction to shut down the government and bring the US to the brink of default on its debts, was less conciliatory. Appearing on CNN and ABC, he blamed Senate Republicans like McCain for abandoning their House colleagues over the shutdown and forcing them to accept a "lousy" deal which fell short of the goal of defunding the Affordable Care Act.

Cruz also suggested that he might seek to force another shutdown when the next deadline for agreeing a budget arrives, in January.

Polls show that support for the GOP, which is blamed for the shutdown, is at an all-time low.

Appearing on CNN's State of the Union, McCain, the 2008 Republican presidential nominee, said problems surrounding the rollout of Obamacare, which were acknowledged on Sunday by the treasury secretary, Jack Lew, would have been a bigger story if conservative Republicans had not staged a "fools errand" in their efforts to defund the law through shutting down the federal government.

"[There are] many ironies here, but one of them is the fiasco of this rollout has been obscured because of this internecine strife that's been going on in the Republican Party," McCain said.

Championed by Cruz, House Republicans insisted on attaching to spending bills provisions to defund Obamacare. The Democrat-controlled Senate refused to accept any such measures, leading to a stalemate that left the country in the grip of a 16-day government shutdown.

Asked if the end of the shutdown without any significant concession on Obamacare had seen Republicans enter a period of civil war, McCain said: "We have to have some straight talking. There are some divisions in the Republican party, we've had them in the past … it's very regrettable because our adversary is not each other and we will probably have to go through discussion and debate."

The Arizona senator, who was one of many senate Republicans to criticize the shutdown strategy, refused to single out Cruz directly. Instead he said he blamed the "whole effort".

"Those involved in it went on a fool's errand," he said, adding that Republicans should "keep up the fight against Obamacare, but don't shut down the government and have so much collateral damage to innocent Americans."

Cruz has not ruled out pursuing another government shutdown. McCain, pursuing the same line followed by McConnell on CBS's Face the Nation, said he was confident the American people would not let that happen.

"It will not happen," he said. "I am very confident the American people will not stand for another repetition of this disaster."

McCain did not call for the resignation of President Barack Obama's heath secretary, as other Republicans have done. Asked by CNN's Gloria Borger if he thought Kathleen Sebelius should resign, McCain said he supported the idea of congressional hearings to find out who was to blame.

"Let's find out who is responsible for this fiasco and then take the appropriate action," he said. "But this is just the beginning of the problems. That's why we Republicans have to keep up the fight. But we have to rifle-shot it rather than go at it with a meat axe, which cannot succeed."

He said Obamacare's rollout problems could be easily fixed: "Send Air Force One out to Silicon Valley, load it up with smart people, bring them back to Washington and fix this problem. It's ridiculous. And everybody knows that."

Cruz, who appeared on CNN's State of the Nation as well as ABC's This Week, did not rule out attempting to force another shutdown. Asked by ABC's Jonathan Karl whether he would rule out blocking funding of the government over Obamacare again, he said: "I would do anything and I will continue to do anything I can to stop the train wreck that is Obamacare.

"What I will do is continue standing [up for] the American people, because it isn't working, it's costing people jobs, and it's taking away their healthcare."

Since the launch of the insurance market federal website on 1 October, the rollout of the Affordable Care Act has been beset with problems. Users seeking to shop around for insurance have been unable to log in, there have been severe delays and some have reported seeing rates increase when they expected them to go down. The federal government has reported millions of visitors to the site, but have refused to give figures on how many people have actually enrolled.

A report by the Associated Press on Sunday showed that 476,000 health insurance applications had been filed for Obamacare through federal and state exchanges – the most detailed measure yet of the glitch-ridden site – but officials still refuse to release the raw data on how many people have enrolled.