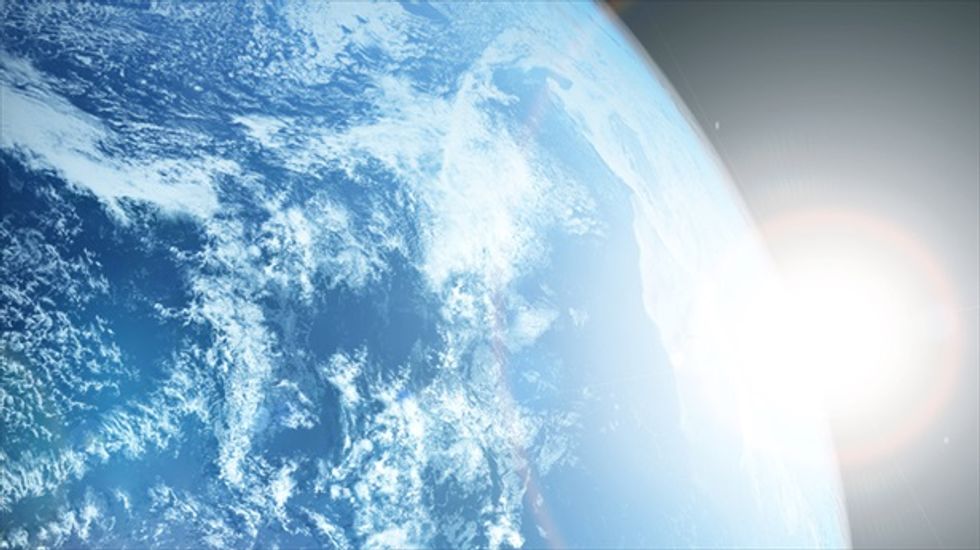 "We choose to go to the moon." So said John F Kennedy in September 1962 as he pledged a manned lunar landing by the end of the decade.

The US president knew that his country's space programme would be expensive. He knew it would have its critics. But he took the long-term view. Warming to his theme in Houston that day, JFK went on: "We choose to go to the moon in this decade and do the other things, not because they are easy, but because they are hard, because that goal will serve to organise and measure the best of our energies and skills, because that challenge is one that we are willing to accept, one we are unwilling to postpone, and one which we intend to win, and the others, too."

That was the world's richest country at the apogee of its power in an age where both Democrats and Republicans were prepared to invest in the future. Kennedy's predecessor Dwight Eisenhower took a plan for a system of interstate highways and made sure it happened.

Contrast that with today's America, which looks less like the leader of the free world than a banana republic with a reserve currency. Planning for the long term now involves last ditch deals on Capitol Hill to ensure that the federal government can remain open until January and debts can be paid at least until February.

The US is not the only country with advanced short-termism; it merely provides the most egregious example of the disease. This is a world of fast food and short attention spans; of politicians so dominated by a 24/7 news agenda that they have lost the habit of planning for the long term. Britain provides another example of the trend. Governments of both left and right have for years put energy policy in the "too hard to think about box". They have not been able to make up their minds whether to commit to renewables (which is what Germany has done) or to nuclear (which is what the French have done). As a result, the nation of Rutherford is now prepared to have a totalitarian country take a majority stake in a new generation of nuclear power stations.

Politics, technology and human nature all militate in favour of kicking the can down the road. The most severe financial and economic crisis in more than half a century has further discouraged policymakers from raising their eyes from the present to the distant horizon.

Clearly, though, the world faces long-term challenges that will only become more acute through prevarication. These include coping with a bigger and ageing global population; ensuring growth is sustainable and equitable; providing the resources to pay for modern transport and energy infrastructure; and reshaping international institutions so that they represent the world as it is in the early 21st century rather than as it was in 1945.

Pascal Lamy had a stab at tackling some of these difficult issues last week when he presented the findings of the Oxford Martin Commission for Future Generations, which the former World Trade Organisation chief has been chairing for the past year.

The commission's report, Now for the Long Term, looks at some of so-called megatrends that will shape the world in the decades to come, and lists the challenges under five headings: society; resources; health; geopolitics and governance.

Change will be difficult, the study suggests, because problems are complex, institutions are inadequate, faith in politicians is low, and short-termism is well-entrenched. It cites examples of collective success – such as the Montreal convention to prevent ozone depletion, the establishment of the Millennium Development Goals, and the G20 action to prevent the great recession of 2008-09 turning into a full-blown global slump. It also cites examples of collective failure, such as depletion of fish stocks and the deadlocked Copenhagen climate change summit of 2009.

The report comes up with a range of long-term ideas worthy of serious consideration. It urges a coalition between the G20, 30 companies and 40 cities to spearhead the fight against climate change; it would like "sunset clauses" for all publicly funded international institutions to ensure they are fit for purpose; the removal of perverse subsidies on hydrocarbons and agriculture, with the money redirected to the poor; the introduction of CyberEx, an early warning platform aimed at preventing cyber-attacks; a Worldstat statistical agency to collect and ensure the quality of data; and investment in the younger generation through conditional cash transfers and job guarantees.

Lamy expressed concern that the ability to address challenges is being undermined by the absence of a "collective vision for society". The purpose of the report, he said, was to build "a chain from knowledge to awareness to mobilising political energy to action".

Full marks for trying, but this is easier said than done. Take trade, where Lamy has spent the past decade, first as Europe's trade commissioner then as head of the WTO, trying to piece together a new multilateral deal. This is an area in which all 150-plus WTO members agree in principle about the need for greater liberalisation but in which it has proved impossible to reach agreement in talks that started in 2001.

Nor will a shake-up of the international institutions be plain sailing. It is a given that developing countries, especially the bigger ones such as China, India and Brazil, should have a bigger say in the way the International Monetary Fund and the World Bank are run. Yet it has proved hard to persuade countries in the developed world to cede some of their voting rights and the deal is still being held up owing to foot-dragging by the US. These, remember, are the low hanging fruit.

Another conclave of the global great and good is looking at what should be done in one of the much tricker areas, climate change. The premise of the Global Commission on the Economy and Climate is that nothing will be done unless finance ministers are convinced of the need for action, especially given the damage caused by a deep recession and sluggish recovery. Instead of preaching to the choir, the plan is to show how to achieve key economic objectives – growth, investment, secure public finances, fairer distribution of income – while protecting the planet. The pitch to finance ministers will be that tackling climate change will require plenty of upfront investment that will boost growth rather than harm it.

Will this approach work? Well, maybe. But it will require business to see the long-term benefits of greening the economy as well as the short-term costs, because that would lead to the burst of technological innovation needed to accelerate progress. And it will require the same sort of commitment it took to win a world war or put a man on the moon.