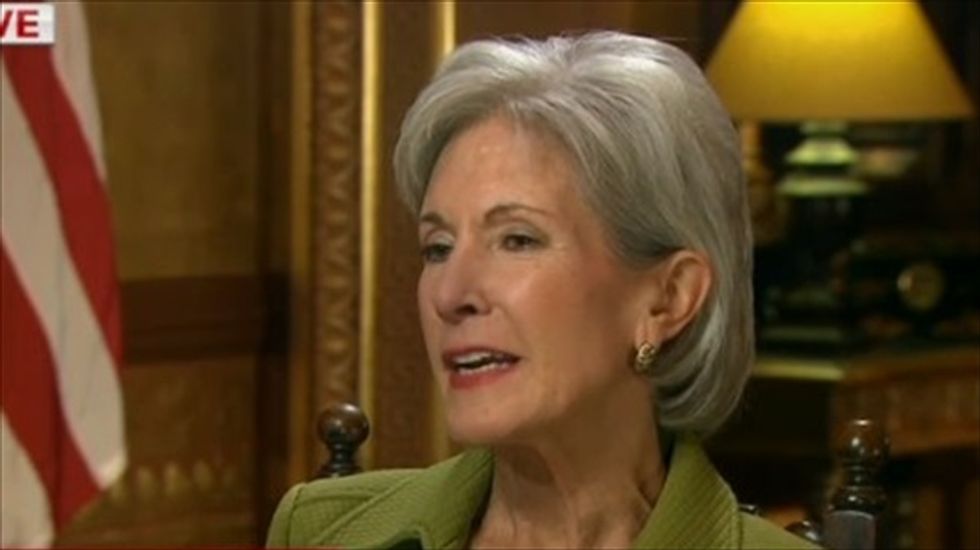 Health and Human Services Secretary Kathleen Sebelius reiterated her defense of the online sign-up process for health care under the Affordable Care Act in an interview on Tuesday with CNN host Dr. Sanjay Gupta, insisting that the problems users have reported have come early in the roll-out process.

"We're early in the first quarter, in football terms," Sebelius told Gupta. "We have a six-month open enrollment period, and I am confident that millions of Americans, at the end of open enrollment, March 31st, will have affordable health coverage for the first time in their lives."

Sebelius did concede to Gupta that, since she already has a health insurance plan, she has not done more than create an account on the website, Healthcare.gov, which has been plagued with technical issues to the point that President Barack Obama issued a statement calling for an improved performance.

"Did you find it challenging?" Gupta asked Sebelius. "What did you think of it?"

"I think there certainly are some challenges," Sebelius conceded again. "It could be smoother. It could be easier to access, and that's really what we're working on. Nobody said the site is working the way we want it to. Certainly the president acknowledged that yesterday."

At the same time, Sebelius noted to Gupta that despite the online issues, anyone who manages to sign up by Dec. 15 will still have health insurance effective Jan. 1, 2014. She also told Gupta that delaying the Oct. 1 launch date was not an option even after the site crashed during a test run with only a few hundred users signed on.

"There are people in this country who have waited for decades for affordable health coverage for themselves and their families," Sebelius argued. "People who were waiting for this to happen. And what's clear is, we have a product. The product really works. We have created a market where there wasn't a market."

Watch Gupta's interview with Sebelius, aired on Tuesday, below.