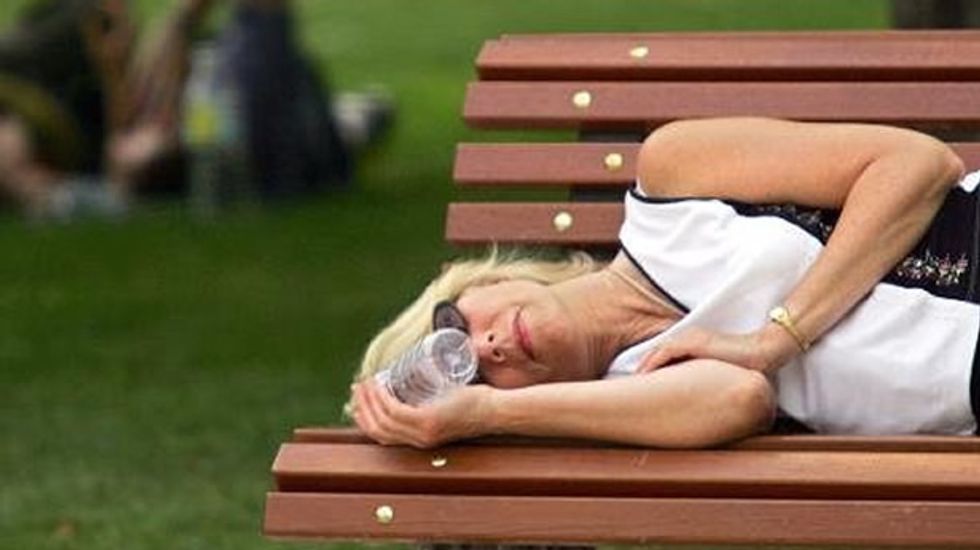 "A woman takes a siesta in Retiroa Garden in Madrid, Spain" via AFP

Spanish lawmakers want to shift the country back a time zone and impose more healthy, family-friendly working hours: a tricky job in a land known for siestas and late-night partying.

A typical Spaniard's working day? "Start at 9:00 am, stop at 2:00 pm to eat until four or five, then start again and work until about 8:00 pm," says Nuria Chinchilla, a specialist in work and family life at Spain's IESE Business School.

Some warn this lifestyle -- which dates from around the 1940s when poor Spaniards would work two jobs to make ends meet -- is harming their personal lives now.

It leads to a lower quality of life, less time spent with the family and lower birth rates, more accidents at work and more school drop-outs because children go to bed too late, the economist says.

Her words echo warnings in a report recently approved by parliament, which called for Spain to turn back its clocks, jumping west an hour to the same time zone as Britain and Portugal.

Despite lying far to the west of Europe in a line with those countries, mainland Spain has been in the same time zone as central Europe since 1942, when Francisco Franco's fascist government adopted it in line with Nazi Germany.

"The fact that Spain for more than 71 years has not been in the correct time zone causes us to get up too early and sleep on average one hour less than the time recommended by the World Health Organisation," said his report.

"Our timetable is determined more by the sun than by the clock. We eat at one o'clock in the afternoon and dine at eight, according to the sun, but the clock says it is three o'clock and 10 o'clock," the text said.

Shifting the time zone would give Spain "more time for the family, for training, for personal life and leisure and would avoid wasted time during the workday," the report said.

"The results would bring us into line with Europe in many respects in which we currently differ, particularly in productivity and competitiveness, in having a balanced family life and in sharing family duties."

The report proposes that the government promote a more regular working day, "with a maximum one-hour break for lunch, preferably from 1:00 to 2:00 pm, which would also make the mid-morning coffee break unnecessary".

These old habits will be hard to break, however.

Buqueras says that most public offices ignore existing regulations that require them to finish the working day at 6:00 pm -- though some are starting to change.

Madrid town hall has imposed a 5:00 pm finish since 2010 -- reining it in from 7:00 pm previously. This has led to "savings of about 30 percent in the electricity bill for the lights and computers", says spokesman Nacho Garcia Salgado.

In the private sector, the big energy company Iberdrola has imposed working hours of 7:15 am to 3:30 pm, where the day used to last until 6:30 pm.

That leaves workers "the afternoon free to attend to their personal life", says Angeles Alcazar, the company's social projects manager.

Since then, "accidents at work have decreased by 10 percent" and productivity has risen, with 500,000 work-hours estimated to have been saved.

"There is still much left to do," Alcazar said.

"We are one of the countries that works the most hours but comes out the least productive."

Proponents of a change say prime time broadcasts should be brought forward, particularly films and football matches which sometimes kick off as late as 11:00 pm.

The shake-up would be particularly difficult in the current economic crisis, when "for economic reasons, salaries are being cut and workdays are getting longer," says Angels Valls, a researcher in labour relations at the business school ESADE.

"It is a cultural matter, and the historical roots are hard to change."