Wild emotions are all very well, Russell Brand, but then what? 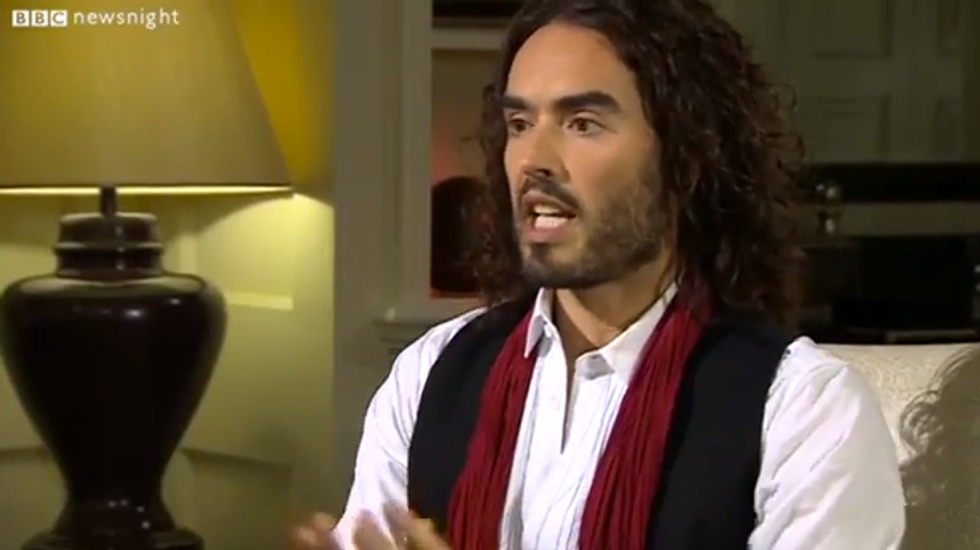 Now, as in the 1920s and 30s, many Europeans agree with Brand that all politicians are crooks and democracy is a sham

Here are two quotes. The first is from the Fascist Decalogue, written by Benito Mussolini in 1938. The second is from an article,"We no longer have the luxury of tradition", written by Russell Brand in 2013.

"Service can be rendered at all times, in all places, and by every means. It can be paid with toil and also with blood," said the one.

"Revolt in whatever way we want, with the spontaneity of the London rioters, with the certainty and willingness to die of religious fundamentalists or with the twinkling mischief of the trickster," said the other.

Only the contemporary references to suicidal murderers and rioting Londoners reveal that the second call to violence came from the comedian/actor and the first from the dictator.

It is too easy to dismiss the enormous audience for Brand by saying: "They're just enjoying the show." True, artists have always made a show of being drawn towards fanaticism. Extremism is more exciting and dramatic, more artistic perhaps, than the shabby compromises and small changes of democratic societies. You suspect that half the great writers of the 1920s and 1930s supported fascism or communism just for the thrill of it.

Today, the need to strike a pose is all the greater. Television controllers manufacture celebrities like Volkswagen manufactures cars, and insert them into every niche in their schedules. When I have complained that the actor fronting a documentary knows nothing about African poverty, say, or the comedian on the political panel knows nothing about politics, they reply that the viewers want celebs. If they don't put them in front of a camera, the viewers won't watch. In a saturated media market the ambitious celebrity has to go further than the competition to stand out from the crowd.

With women singers, escalation has gone from Debbie Harry's mildly revealing miniskirts of 25 years ago, through Madonna's bondage gear, to the semi-nudity of Christina Aguilera and Rihanna, to the actual nudity of Miley Cyrus. At every stage, singers insisted that they were "empowered" artists who had "embraced their sexuality", rather than cynics. They almost certainly believed their PR. Marketing manoeuvres work best when they are executed with complete sincerity.

Political comedy has followed the same path. Ben Elton's attacks on the Conservatives of the 1980s seemed daring at the time. But in truth he was just a mainstream Labour supporter who wanted Britain to be a slightly better place. No one would be excited by that modest statement of intent now. So Brand escalates: "Like most people I regard politicians as frauds and liars and the current political system as nothing more than a bureaucratic means for furthering the augmentation and advantages of economic elites."

The democratic left is no better than the democratic right. Ed Miliband is as great a menace as David Cameron. Obama is the same as the Tea Party.Instead of corrupt democratic leaders, Brand wants a "total revolution of consciousness and [of] our entire social, political and economic system" to stop the despoliation of the planet and allow the redistribution of wealth.

When Jeremy Paxman on the BBC tried to tell him that it would take a government to redistribute wealth and protect the environment, Brand could not say what type of government he wanted. How could he? If it were democratic it would be filled with his "frauds and liars". And if it weren't democratic, it would be a dictatorship.

I don't doubt that Russell Brand is as sincere as Miley Cyrus. I don't doubt either that to call his thought "adolescent" is to insult teenagers everywhere. He writes as if he is a precocious prepubescent rather than an adolescent: a child, born after the millennium, who can behave as if we never lived through the 20th century. He does not know what happened when men, burning with zealous outrage, created states with total control of "consciousness and the entire social, political and economic system" – and does not want to know either.

Which is not to say that Brand is just a fool or that people who watch him in their millions are just enjoying a celebrity tantrum. Now, as in the 1920s and 1930s, many inhabitants of most European countries agree with Brand's slogans that all politicians are crooks and democracy is a sham. Today's crisis has left Europe in a pre-revolutionary situation. Or, if that is going too far, you can at least say that Europe looks ready for radical political change. Unfortunately for Brand, who sees himself a radical leftist of some sort, apparently, the greatest beneficiary of the nihilism he promotes is the radical right.

Many people are surprised that the rightwing and neo-fascist movements have benefited most from a banking crash brought by the most overpaid people on the planet. I have to confess to being shocked as well. But I should not be, and nor should you. Classic fascism movements borrowed from the left, and today's neo- or post-fascist movements follow suit. Mussolini emphasised that fascism was a third way between capitalism and socialism.

Today Marine le Pen can say that the Front National has downplayed its racism and homophobia, is the enemy of unregulated markets and a supporter of state intervention to protect French interests. As important as its cross-class appeal is that the far right has a programme. It may be a wicked and illusory programme but proposals to stop immigration and tackle the disastrous euro experiment make sense too in hard times. The far left, by contrast, has nothing. It cannot say what alternative it has to mainstream social democracy – as Brand's slack-jawed inability to answer simple questions showed.

In any case, the similarities between far left and far right are more striking than their differences. Brand made this point for me too when he held up the death cults of ultra-reactionary religious fundamentalists as examples to emulate rather than the enemies to fight.

Brand's name was all over the web as I attended the funeral of the Marxist philosopher Norman Geras, who was a great influence on me and many others. Throughout his political life, he emphasised that the only left worth having was a left that was committed to democracy and universal human rights in everything it said and did.

By Geras's reasoning you should be as willing to take on Russell Brand as Nigel Farage, Marine le Pen or George Osborne. So be it, say I. If you cannot take on and beat a glib exhibitionist in argument, you've no right to be in the arguing business in the first place.