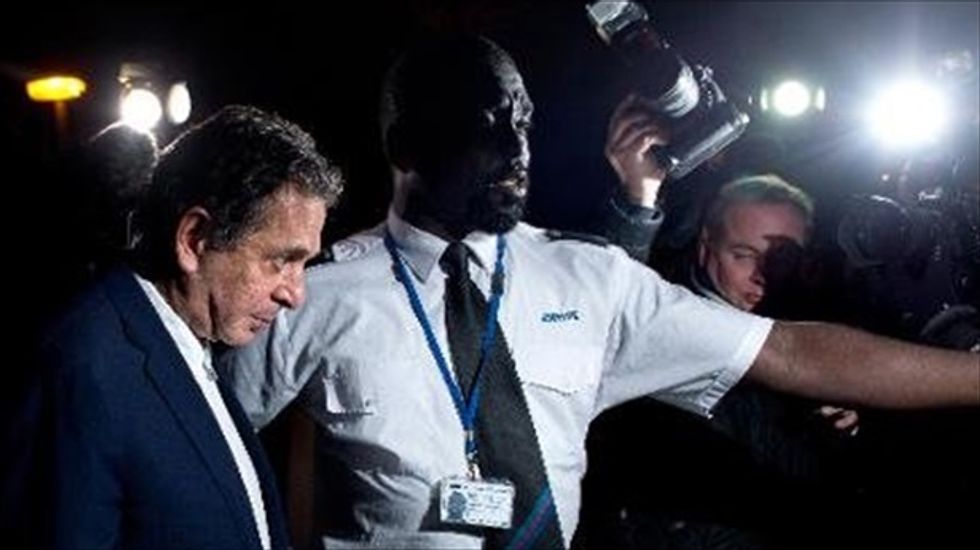 Multi-millionaire art dealer Charles Saatchi told a British court Friday he had no proof that his celebrity chef ex-wife Nigella Lawson took drugs -- but admitted he had sent an email claiming she was "off her head".

Saatchi, 70, said he was "utterly bereft" that a private email he sent to Lawson referring to her alleged drug use had been made public.

The email he wrote to Lawson was read in full to jurors at the trial of two Italian sisters who were personal assistants to the couple. The two are accused of fraudulently spending £685,000 ($1.1 million, 820,000 euros) on Saatchi's company credit cards.

But when asked if he believed allegations that Lawson was a habitual cocaine user, Saatchi told Isleworth Crown Court in London: "I do not know."

"If you ask me whether I actually knew whether Nigella ever took drugs, the answer is no."

Saatchi said had been "very fond" of Elisabetta and Francesca Grillo -- who deny fraud -- but feared they would use their allegations that Lawson took drugs as a defence in their trial for fraud.

In the email he referred to his ex-wife as "Higella" at one point.

He wrote: "I can only laugh at your sorry depravity.

"Of course now the Grillos will get off on the basis that you... were so off your head on drugs that you allowed the sisters to spend whatever they liked and yes I believe every word the Grillos have said, who after all only stole money."

Questioned by a prosecution lawyer, Saatchi said: "I'm utterly bereft that this private email to Nigella has come back to haunt us both.

"The stories that the Grillos were parading was that Nigella had a severe cocaine habit that stretched back a very long time for the entirety of our marriage.

"What I was speculating here was that the Grillos would use this as a defence."

Saatchi said Lawson was "very cross" with him when he had informed her he had confronted the Grillo sisters about their alleged misuse of his company credit card.

Saatchi said he told the pair they could pay off the money they owed and live rent-free in a London house that Lawson used for filming, but his then-wife did not agree.

Prosecutors claim the Grillo sisters spent the money on first-class flights, hundreds of taxi journeys and designer clothes and handbags.

Saatchi and Lawson split this year after 10 years of marriage, announcing their divorce after pictures appeared in British newspapers of him grabbing her by the neck outside a London restaurant.

He accepted a police caution over the incident but said he was "disappointed" she had refused to say publicly that he had not abused her.

Lawson, who is famed for her flirtatious style of TV presenting, has made an estimated £15 million from her television series and cookery books.

The second season of the US cooking show "The Taste" on the ABC network, in which she features as a judge, is due to air in January.