For Pope Francis the liberal, this promises to be a very bloody Sunday 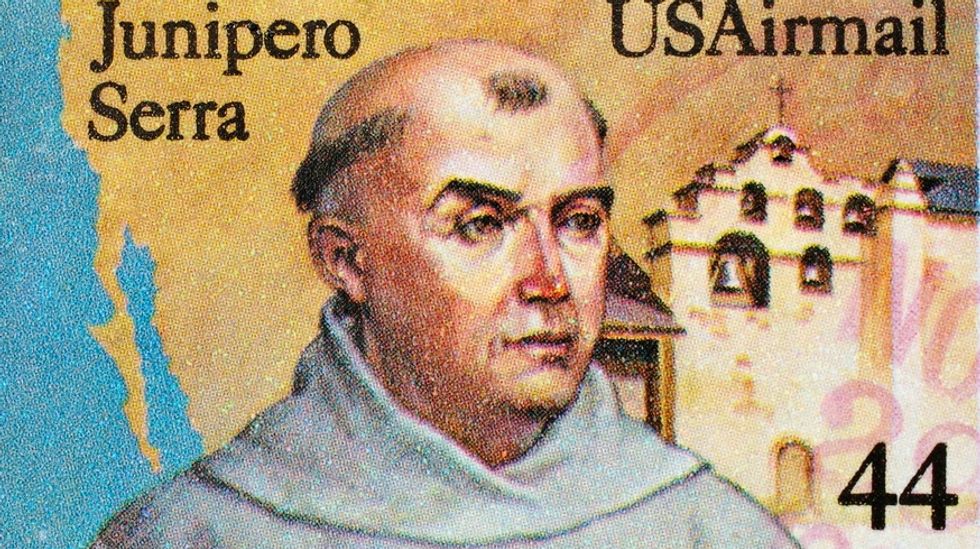 Francis is the poster pope for progressives. But canonizing a genocidal missionary like Junípero Serra epitomizes the Catholic history problem.

He is a pin-up for liberals and progressives, "the obvious new hero of the left". So says the Guardian's Jonathan Freedland of Pope Francis, and it's true that most of the surprises have been good ones.

His statements denouncing capitalism are of the kind that scarcely any party leader now dares to breathe. He appears to have renounced papal infallibility. He intends to reform the corrupt and scheming Curia, the central bureaucracy of the Catholic church. He has declared a partial truce in the war against sex that his two immediate predecessors pursued (while carefully overlooking the rape of children) with such creepy fervor.

It's worth noting that these are mostly changes of emphasis, not doctrine. Pope Francis won't devote his reign to attacking gays, women, condoms and abortion, but nor does he seem prepared to change church policy towards them. But it's not just this that spoils the story. There is a strange omission that puts the pope on the wrong side even of John Paul II. It's his failure so far to engage with or even acknowledge the past horrors over which the church has presided.

From the destruction of the Cathars to the Magdalene laundries, the Catholic church has experimented with almost every kind of extermination, genocide, torture, mutilation, execution, enslavement, cruelty and abuse known to humankind. The church has also, at certain moments and places across the past century, been an extraordinary force for good: the bravest people I have met are all Catholic priests, who – until they were also crushed and silenced by their church – risked their lives to defend vulnerable people from exploitation and murder.

It's not just that he has said nothing about this legacy; he has eschewed the most obvious opportunities to speak out. The beatification last month of 522 Catholics killed by republican soldiers during the Spanish civil war, for example, provided a perfect opportunity to acknowledge the role the church played in Franco's revolution and subsequent dictatorship. But though Francis spoke at the ceremony, by video link, he did so as if the killings took place in a political vacuum. The refusal in July by the four religious orders that enslaved women in Ireland's Magdalene laundries to pay them compensation cried out for a papal response. None came. How can the pope get a grip on the future if he won't acknowledge the past?

Nowhere is the church's denial better exemplified than in its drive to canonise the Franciscan missionary Junípero Serra, whose 300th anniversary falls on Sunday. Serra's cult epitomizes the Catholic problem with history – as well as the lies that underpin the founding myths of the United States.

You can find his statue on Capitol Hill, his face on postage stamps, and his name plastered across schools and streets and trails all over California. He was beatified by Pope John Paul II, after a nun was apparently cured of lupus, and now awaits a second miracle to become a saint. So what's the problem? Oh, just that he founded the system of labour camps that expedited California's cultural genocide.

Serra personified the glitter-eyed fanaticism that blinded Catholic missionaries to the horrors they inflicted on the native peoples of the Americas. Working first in Mexico, then in Baja California (which is now part of Mexico), and then Alta California (now the US state of California), he presided over a system of astonishing brutality. Through various bribes and ruses Native Americans were enticed to join the missions he founded. Once they had joined, they were forbidden to leave. If they tried to escape, they were rounded up by soldiers then whipped by the missionaries. Any disobedience was punished by the stocks or the lash.

They were, according to a written complaint, forced to work in the fields from sunrise until after dark, and fed just a fraction of what was required to sustain them. Weakened by overwork and hunger, packed together with little more space than slave ships provided, they died, mostly of European diseases, in their tens of thousands.

Serra's missions were an essential instrument of Spanish and then American colonization. This is why so many Californian cities have saints' names: they were founded as missions. But in his treatment of the indigenous people, he went beyond even the grim demands of the crown. Felipe de Neve, a governor of the Californias, expressed his horror at Serra's methods, complaining that the fate of the missionized people was "worse than that of slaves". As Steven Hackel documents in his new biography, Serra sabotaged Neve's attempts to permit Native Americans a measure of self-governance, which threatened Serra's dominion over their lives.

The diverse, sophisticated and self-reliant people of California were reduced by the missions to desperate peonage. Between 1769, when Serra arrived in Alta California, and 1821 – when Spanish rule ended – its Native American population fell by one third, to 200,000.

Serra's claim to sainthood can be sustained only by erasing the native peoples of California a second time, and there is a noisy lobby with this purpose. Serra's hagiographies explain how he mortified his own flesh; they tell us nothing about how he mortified the flesh of other people.

In reviewing Hackel's biography a fortnight ago, the Catholic professor Christopher O Blum extolled Serra for his "endless labor of building civilization in the wilderness". He contrasted the missionary to "the Enlightened Spanish colonial officials who wanted ... to leave the Indians to their immoral stew". "The Indians there not only went around naked much of the year – with the predictable consequence of rampant promiscuity – but were divided into villages of 250 or fewer inhabitants ... ready-made for the brutal petty tyrant or the manipulative witch doctor". The centuries of racism, cruelty and disrespect required to justify the assaults of the church have not yet come to an end.

I would love to see the pope use the tercentenary on Sunday to announce that he will not canonise Serra, however many miracles his ghost might perform, and will start to engage with some uncomfortable histories. Then, perhaps, as Jonathan Freedland urges, I'll put a poster of Francis on my wall. But not in the bedroom.

• Twitter: @georgemonbiot. A fully referenced version of this article can be found at Monbiot.com