If it survives close encounter with the sun, Comet ISON will light up morning skies until mid-December 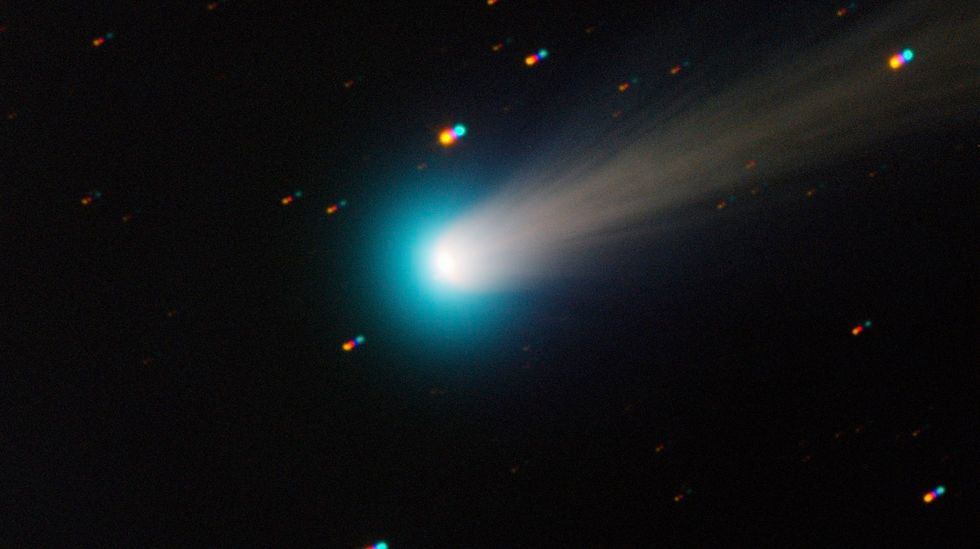 If it survives a potentially disastrous encounter with the sun this week, Comet ISON will put on an impressive early morning display in the run up to Christmas. But anyone hoping for a Bethlehem-style celestial sign on the big day will be disappointed. The comet will probably be too faint to see with a naked eye by then.

ISON is currently speeding towards a fiery encounter with the sun on Thursday from which it may not return. It will pass just 720,000 miles above the solar surface, or 130 times closer to the Sun than our planet ever reaches.

The intense sunlight will heat the comet to about 2,700C and accelerate its evaporation. In the past, some comets have been seen to vaporise under the onslaught.

Over the weekend the comet received a sudden boost in its brightness making it easily visible to the naked eye. After a disappointing few months, the comet's intensity shot up by a factor of around six on Saturday, delighting stargazers and scientists alike.

The unexpected outburst also raised fears that it was breaking up. However, several more days of observation show that the comet is "still keeping it together," according to Alan Fitzsimmons, of Queen's University, Belfast.

Comet ISON was discovered on 21 September 2012 by astronomers using the International Scientific Optical Network (ISON) telescope near Kislovodsk, Russia. Like all comets it is a ball of ice and dusk left over from the formation of the solar system.

Although no one can predict what will happen during ISON's encounter with the sun, John Brown, University of Glasgow has made a study of sungrazing comets and points out that ISON will not be passing as close to the Sun as did comet Lovejoy in 2011.

On 16 December that year, Lovejoy skimmed just 85,000 miles above the solar surface. It survived but with very little of its 0.3-mile-wide nucleus left. ISON is estimated to be somewhat bigger at around 2 miles wide, and its evaporating ices have already created a tail of gas that stretches eight million miles through space.

"I'm not a gambling man but if I had to bet a fiver, I'd say ISON will survive,' said Brown.

Even if the majority of the comet emerges, fragments could still be blasted off. This would lead to a much more spectacular tail for skywatchers to see in December's sky.

For the next few days, the comet will be lost from Earth's view in the glare of the Sun. Spacecraft will continuously monitor its passage.

For viewers on Earth, the best time to start looking for the comet will come in the first and second week of December. By then, the tail should be extremely well developed and ISON will appear as a ghostly fan shape in the pre-dawn sky.

The BBC's The Sky At Night presenter Pete Lawrence, says that the tail will be pointing straight up in the eastern sky before dawn through the first two weeks of December.

As the comet travels away from the Sun, so it will rise earlier and earlier in the night, making it easier for the casual skywatcher to spot. By 15 December it will be rising at around 4:30am but by then it could also be fading.

The comet will also be visible in the western sky at sunset. It will be more difficult to spot at this time, however, because the tail is horizontal and immersed in the twilight. Better to set the alarm clock and rise early, when it will be visible in a truly dark sky.

Fitzsimmons will be watching for both professional and personal reasons. "How ISON behaves now will reveal its chemical and physical composition," he says, "But personally I'd just love to see another bright comet over the UK. It's been 16 years since the last one, comet Hale-Bopp, and it's about time for another."