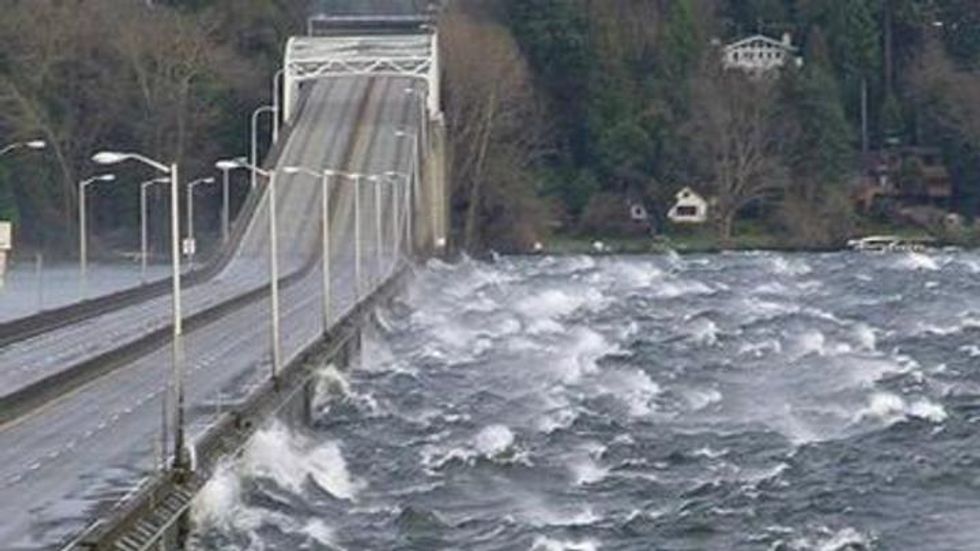 A storm that barreled through the northwest in early November caused a bridge across Lake Washington outside Seattle to sway violently in the wind.

On Friday, police department officials released the terrified 911 calls of people who drove on to the Evergreen Point Bridge on Washington State Road 520 and found themselves unable to cross or turn back. On Friday night, a report by Seattle's Fox Channel 13 featured some of the harrowing recordings.

Shortly before 11:00 a.m. that Saturday, a motorist called 911 and said, "I am stuck on the Evergreen Point Bridge going west, all the traffic stopped because the wind is blowing so much. How do I get off the bridge, or what’s going on with the bridge? Are they closing it?”

"No," said the emergency dispatcher, "people should just be driving. I don't know why cars are stopping."

Around 50 motorists abandoned their vehicles all together, scrambling to safety.

“Are you outside your car?” a dispatcher asked one woman.

“I am, I’ve moved up to where the bridge isn’t moving,” she replied.

Later, another driver called in asking why people had just left their cars on the bridge.

“The 520 bridge, is it safe to cross?" he asked. "Everyone is abandoning their cars.”

The operator replied that the Department of Transportation only closes the bridge when the wind reaches a sustained speed of 50 miles per hour for at least 15 minutes. The bridge was closed for several hours later in the day.

Watch video about this story, embedded below via MuchFasterNews: