Maddow: If you're glad Cuccinelli lost, thank a woman 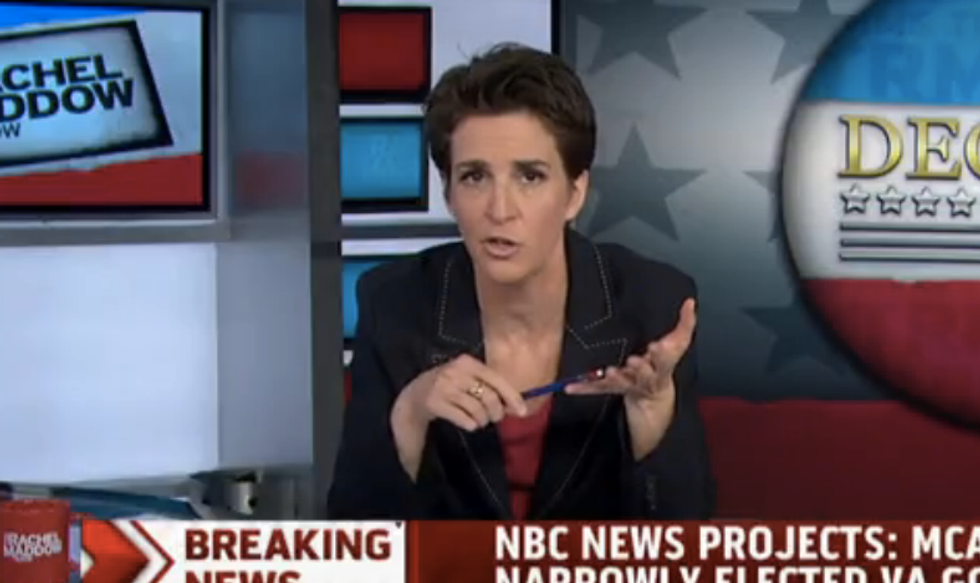 During MSNBC's election coverage on Tuesday night, Rachel Maddow of "The Rachel Maddow Show" talked about the deciding factor that handed the governorship of Virginia to the Democratic Party: women voters.

After the state elected one of its most far-right governors ever in the previous election, Gov. Bob McDonnell (R), the Republican administration did everything within its power to restrict women's access to abortion services and even contraception. In the gubernatorial election, Maddow said, women spoke back in the voting booth.

"You know, when you read the Beltway press about this race all along there's been this kind of gauzy wonder," Maddow said, "about how it is that Terry McAuliffe is doing so disproportionately well among women."

The question isn't so much what McAuliffe is doing right to attract women voters, Maddow said, but what Cuccinelli and the Republicans did to drive them away.

From closing clinics across the state to mandating trans-vaginal ultrasound probes for any women seeking an abortion (which earned McDonnell the nickname "Gov. Ultrasound"), it is almost as if the Republican Party in Virginia went out of its way to alienate women.

"Turns out, you know, that Ken Cuccinelli is not that much of a mystery," she said. "He's the harder-to-spell, dark-haired human embodiment of Bob McDonnell's social conservative agenda."

Not only does Cuccinelli want abortion made illegal in Virginia, he's against contraception access and any form of sex outside the heterosexual missionary position.

Watch the clip, embedded below via MSNBC: