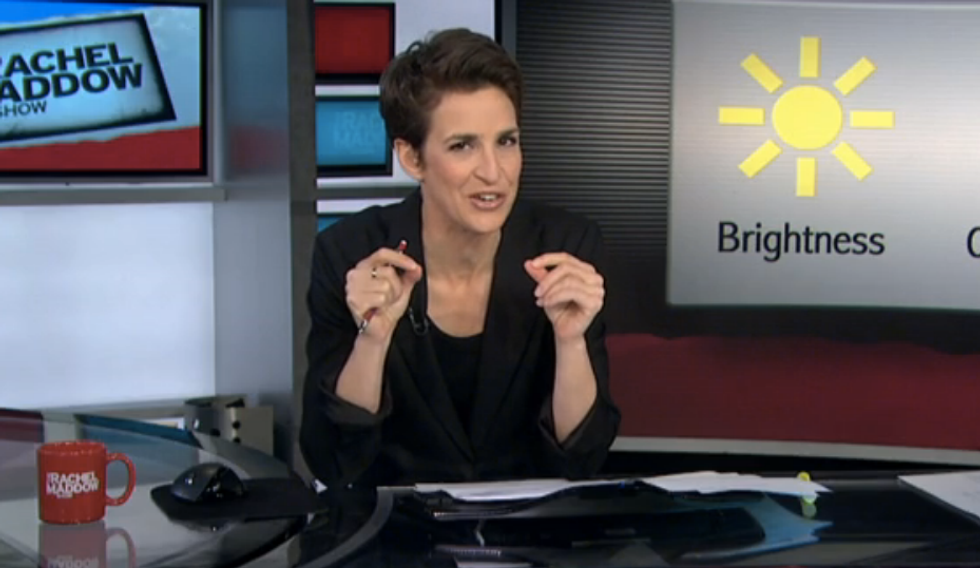 Thursday night on "The Rachel Maddow Show," host Rachel Maddow struck down the myth that the Democratic and Republican Parties are just slightly different versions of the same thing, particularly when it comes to social issues.

In Virginia, Democrat Terry McAuliffe won the governorship on Tuesday, but he does not officially take office until his swearing in, which will take place in early 2014. He has already made it clear, however, that he intends to strike down one of current Gov. Bob McDonnell's executive orders, a law that made it legal to fire public employees in Virginia on the basis of their sexual orientation.

"It had been illegal to fire somebody from a public sector job in Virginia just because they were gay before Bob McDonnell came into office," said Maddow, "but as soon as he was sworn in, he went overtly out of his way to make it legal to fire someone for being gay."

"What is fascinating," she continued, "between the two parties right now, is that the Democrats are pretty much totally unified on these kinds of issues. And for the Republicans, it is complete chaos."

The entire Democratic caucus in the Senate, including conservative "blue dog" Democrats, voted in favor of ENDA. Some Republicans voted for it as well, allowing it to pass with a filibuster-proof majority.

However, in the Republican-led House of Representatives, Speaker John Boehner is flatly refusing to even allow ENDA to come to the floor for debate.

In the wake of Tuesday's election, many moderate Republicans are looking at the defeat of arch-conservative Ken Cuccinelli in the Virginia governor's race as a sign that the party needs to me more inclusive and less hung up on traditional social issue politicking.

"The Democratic Party on discrimination issues?" Maddow said. "They know who they are. They know what they stand for. In the Republican Party, it is much harder to say what's going on."