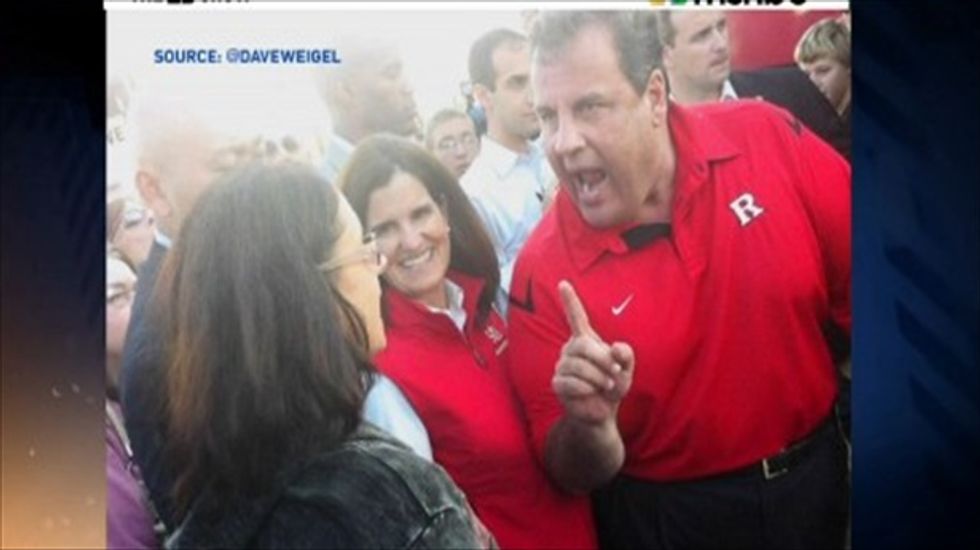 A New Jersey schoolteacher who confronted Gov. Chris Christie (R) on his education record over the weekend told MSNBC host Ed Schultz that the crowd around her encouraged Christie as he behaved dimissively toward her, including a remark referring to teachers as "you people."

"I was taken aback," Melissa Tomlinson told Schultz. "The phrase, 'you people,' I didn't know what he meant by that. I wanted to get some points in with him, wasn't able to."

The Washington Post reported that Tomlinson asked Christie after a campaign rally on Saturday why he kept spreading "to spread the myth that our schools and teachers are failing" on the political trail. Christie reportedly yelled in response, "Because they are," and told Tomlinson, "I am tired of you people. What do you want?"

But both the Post and Schultz reported that state educators have actually produced positive results despite Christie cutting more than $1 billion from New Jersey's education budget.

"He goes around now touting his education budget of almost $9 billion," Tomlinson told Schultz. "But that's not taking a lot of factors into account. That's not showing us how much million is actually going into the classrooms these days."

Instead of funding schools, she argued, state funds are being used for companies developing new standardized tests. Tomlinson also challenged Christie online to do her job for a week.

"I invite you to come see my students, see how little they really have during the school day as they are being forced to keep learning for a single snapshot of their educational worth," she wrote on Sunday. "For that one end-all, be-all test, the NJASK. The one that the future of my job and my life is now based upon. Why do you portray schools as failure factories? What benefit do you reap from this?"

Schultz said Christie's behavior is part of a longstanding pattern.

"Look at this guy's face," he said while posting a picture of an animated Christie talking to Tomlinson. "Look at that. I mean, be a leader of people. This is nothing new for the governor of New Jersey. The man acts like a schoolyard bully at nearly every campaign event."

Watch Schultz's interview with Tomlinson, as aired on Monday, below.