No, Daily Mail: Humans did not come from outer space or from monkeys f*cking pigs 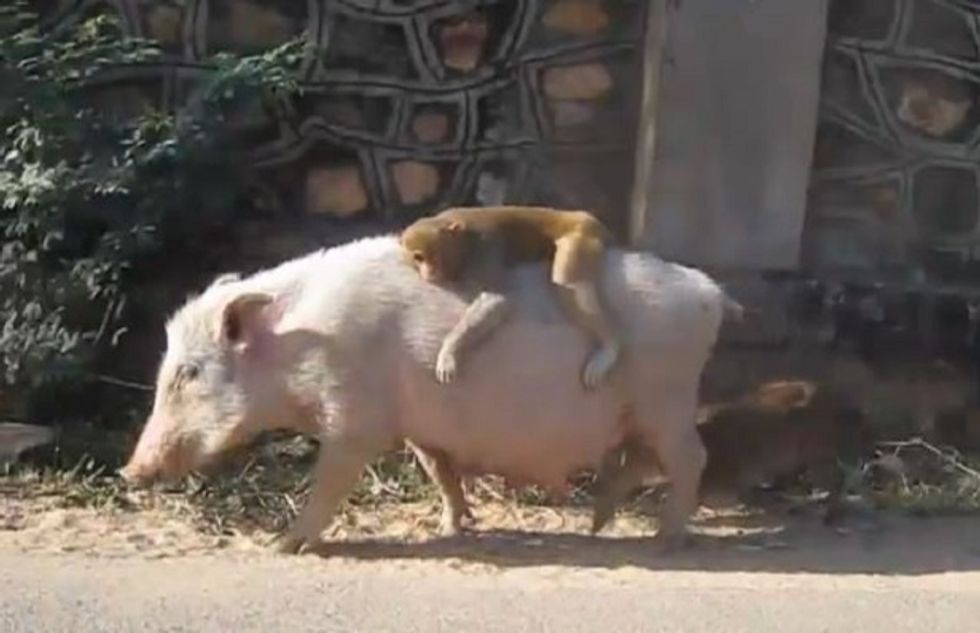 For some reason, the Daily Mail in the last couple of weeks is doing its utmost to make two self-published fantasies by a couple of marginal cranks sound like legitimate dispatches from the world of science.

Well, it's pretty obvious what the reason is. Pseudoscience sells.

The first salvo arrived on November 14, when a ludicrous self-published book with a cover that looks like it was made on MS Paint was treated like a startling new advance in biology. Humans are not from Earth was written, the Mail says, by a "U.S. ecologist" by the name of Ellis Silver.

Now, there's this stuff called "DNA" that we share with every other living thing on the planet which makes it pointless to examine the silly idea in this book -- that human beings were suddenly dropped off here from another solar system just a few tens of thousands of years ago. This "theory" is supported with an amateur scientist's litany of puzzlements -- why do humans sunburn? Why do our backs seem so poorly adapted for the way we live? Why are the heads of babies so large and make childbirth so difficult? It's the usual stuff that sends your garden variety crank looking for spectacularly bad answers.

There's a reason a book like this was self-published by someone no one has ever heard of.

It's the sure sign of a newspaper straining to lend credibility to someone it actually knows nothing about.

Silver's Twitter account hasn't been active in two years, but it lists him as "an ecological consultant" from Madison, Wisconsin. A brief description Ellis wrote about himself in 2008 says that he was "an eco consultant, better living evangelist, and writer, originally from Madison, Wisconsin, but currently living in England. Ellis is the author of two guidebooks on eco solutions, to be published shortly. A website is under construction."

We're still waiting for his website, but we're sure it will be a doozy.

Seven of the eight tweets that Silver put out before his account went dormant all promoted a vanity publishing site, "ideas4writers," which Ellis also used to publish his book.

Any newspaper editor will assure you that silly books published through vanity sites arrive in the mail every day. Promoting a book like this, and straining to make it seem legitimate, is pretty much the opposite of a newspaper's role.

But the Daily Mail was only getting warmed up.

Today, it is promoting an entirely different theory for the ascent of man.

This time, a writer comes up with his own puzzlements about odd human traits -- hairless skin, a protruding nose, heavy eyelashes and the like -- and rather than conclude that we're space aliens dropped off after a trip from another planet, he says we're the result of monkeys fucking pigs several million years ago.

Right off the bat, the Mail pretends that this theorist -- with the unlikely name of Eugene McCarthy -- is "of the University of Georgia."

That would seem to suggest that Mr. McCarthy is on the faculty of that august academy, wouldn't you agree?

But looking at McCarthy's website, he makes it clear that he took a degree from the university and taught there at one time, as grad students typically do. But the university's website doesn't currently list him on the faculty. He also explains that he had some success writing about hybrid bird species, but once he turned to mammals he ran into trouble with a university press, and he found solace publishing from his own website.

As in the previous story, the Mail is title-happy, and Eugene is referred to as "Dr. McCarthy" no less than eight times.

The Mail does refer to the drubbing that Myers gave the "Monkey-Fucking-A-Pig hypothesis," but called Myers "impudent," and Myers -- who not only has a PhD but actually teaches at a university -- does not get the "Dr." treatment.

We know it's probably futile to point out the intellectually dishonest practices of a news organ its own readers refer to as the "Daily Fail." But if we don't do it, who will?

[IMAGE: From a YouTube video of a monkey riding a pig.]