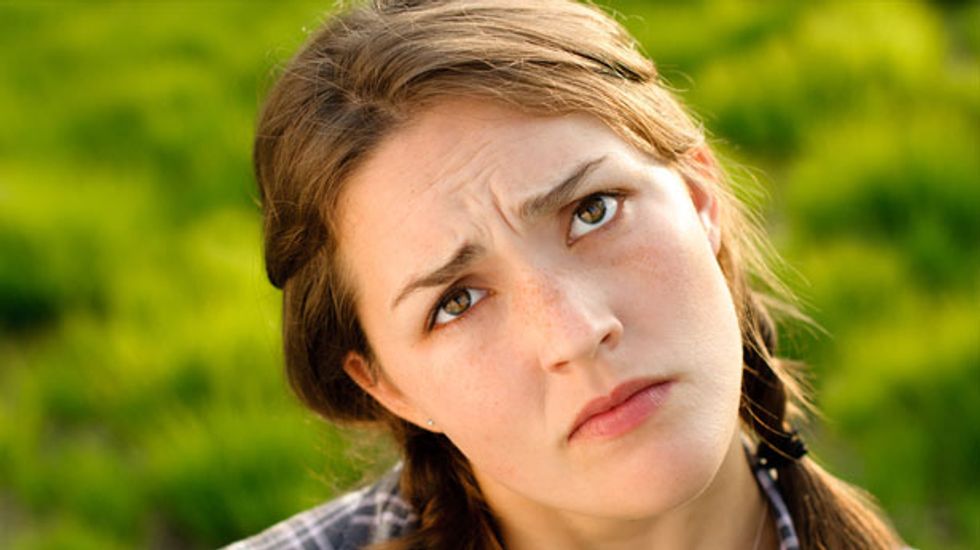 A few weeks back, I went to my first baby shower. My friends have only recently started getting married and having babies – although not necessarily in that order – and I was psyched to pick out a set of adorable baby clothes for the twins to whom my friend had only weeks earlier given birth. I popped into a cutesy Brooklyn baby shop and said I was looking for a baby shower gift for new twins. Her first question: "Girls or boys?" One of each, I said. She pointed me to the section of girls' clothes, all pink, and boys' clothes, all blue.

It's a little weird how all the clothes are pink for girls and blue for boys, isn't it?

She agreed, and said they had one yellow outfit, but then said that nearly everyone who comes in demands the gender color-coding. I ended up buying burp cloths and bibs printed with zigzags – one yellow and one grey.

Gendering kids starts immediately after birth, when we wrap a baby in a pink blanket or a blue one. Babies have no idea what they're even wearing and just need to be kept warm. It's parents who buy into the binary, and the rest of us who are thoroughly uncomfortable when they don't. There's the yellow aisle of gender-neutral toys and apparel, but show up to a baby shower with a pink onesie for a male baby and see what kind of looks you get (believe me, I was tempted, but given that there was a baby of each gender it wouldn't have been quite as effective).

The boy/girl divide gets even more pronounced as kids get older, but there's more of a stigma for boys who cross it than for girls. Most progressive parents these days will buy their daughters building blocks or sign her up for a sports team, but they're a lot less likely to get their son a baby doll or sign him up for ballet. Kids, though, are natural gender-transgressors. Of course they soak up our cultural gender norms and respond accordingly, and even the most feminist parent can attest that it's impossible to keep a daughter totally protected from Disney Princess mania or a son entirely away from war and gun play.

But as influenced as kids may be by the culture outside their front doors, they're still newbies to the whole gender role thing, which means they break the rules more often than adults. And that freaks out some parents, especially when the rule-breaker is their son. Katie may be a tomboy because she likes to climb trees, but if Kevin likes to wear dresses? He's a sissy, he's not acting like a boy, and he might be gay.

That parental anxiety was highlighted this week in a Dear Prudence column in Slate, where a mom wrote in concerned about her husband's over-reaction to their son's penchant for playing dress-up in mom's shoes. Dad makes the kid remove the shoes, then punishes the kid when he gets hysterical – all over donning a pair of ballet flats. The dad in question isn't an unusual tyrant; parents across the US punish their sons for playing dress-up, painting their nails, wanting to grow their hair long, or engaging in other activities that the parent deems "feminine".

Christian parenting manuals instruct parents to quash any sort of play that involves identifying as a gender other than the one the child was assigned at birth. When I was a kid, I had a male friend who loved to dress up in women's clothes – in particular, his sister's gold lame skirt. After he refused to take the skirt off one day, his dad cut it off of him and burned it in the back yard.

The result of harsh gender policing isn't upstanding masculine sons and submissive feminine daughters. It's kids who are hurt, confused and alienated from their parents.

It should go without saying that the majority of kids who play dress-up in gender non-conforming ways don't grow up to be gay or transgender. But some do, and many of the kids who grow up to be gay or trans will point to cross-gender play as an early indicator, for them, of their sexuality and identity. Others still are confused about their sexuality.

The best ally any kid can have as their identity takes shape is an involved, accepting and loving parent. No amount of parental intervention will make a gay kid straight or change the identity of a trans kid. But positive parental actions that affirm your child's individuality and identity can mean that your kid comes to you with questions. She'll know you'll be her biggest advocate in a world that is notoriously cruel to anyone who's different – whether that means gay, transgender, gender non-conforming or simply a boy who wants to wear nail polish or a girl who wants to play football.

Parental intervention in normal explorative play that shames a kid for gender non-conformity sends a very clear message that certain behaviors and identities aren't OK. At best you end up with a kid who's also a homophobe and a bully; at worst your child believes he's unlovable because of who he is, and lives with the attendant psychological and emotional scars. Gay kids have suicide, depression and victimization rates that are significantly higher than their straight counterparts. Of course, that's often not the parent's fault, but parents contribute more often than many would like to admit – to both the victims and the bullies.

What is it, exactly, that's going to break down if a little boy puts on a dress or if a girl wants to cut her hair short? A few years back a Toronto couple refused to publicly disclose the sex of their child – not a big deal, one would think, given that what's between the child's legs isn't really a matter of pressing public interest. Nonetheless, the public went ballistic, accusing the couple of child abuse because the child wasn't clearly identified to outsiders as male or female (the family knew the child's sex, they just didn't want anyone else knowing). Talking heads said the couple was raising a "freak" and denying the child their identity.

It's worth pausing here to note that "male" and "female" are not as clearly-defined categories as we would like them to be. Physically, we're much more the same than we are different, and there's great variation even within each group. And there's a vast middle of intersex people, and people who may have ambiguous genitalia, non-standard genitalia, chromosomes that don't match their external sex organs or hormones that deviate from the normal. Nature, unlike many parents, isn't quite so intent on keeping males and females clearly differentiated.

So why are we so deeply concerned with making sure boys are identified as boys and girls as girls – especially with things that have nothing to do with genitalia, hormones, chromosomes or, most importantly, how the child sees themselves? There's nothing about having a penis that correlates with the color blue; there's nothing about having a vagina that correlates with the ability to cook (just ask Time Magazine).

While gender identity is a real thing, the trappings we put onto gender – the colors, the clothes, the assumed preferences – are all cultural, not natural. There are certainly behavioral patterns that are influenced by hormones and body chemistry, but we don't know exactly what, or to what extent. We can take educated guesses, but we've never lived in a world without cultural constructs around gender, so pinpointing "X personality characteristic is male" becomes impossible. Cultural beliefs about gender also influence biology – how a child is treated physically, emotionally and intellectually impacts their neural pathways, brain development and even musculature.

So, why apply gender roles so strictly to the youngest among us, and punish transgressors so harshly?

We'd be much better off if we let kids be kids, and didn't project our own gender anxieties onto their preferences or playtimes. And we should start recognizing that terrorizing a kid for cross-gender play isn't "tough love"; it's abuse.