Reporters Without Borders slams Egypt for 'threats to freedom of information' 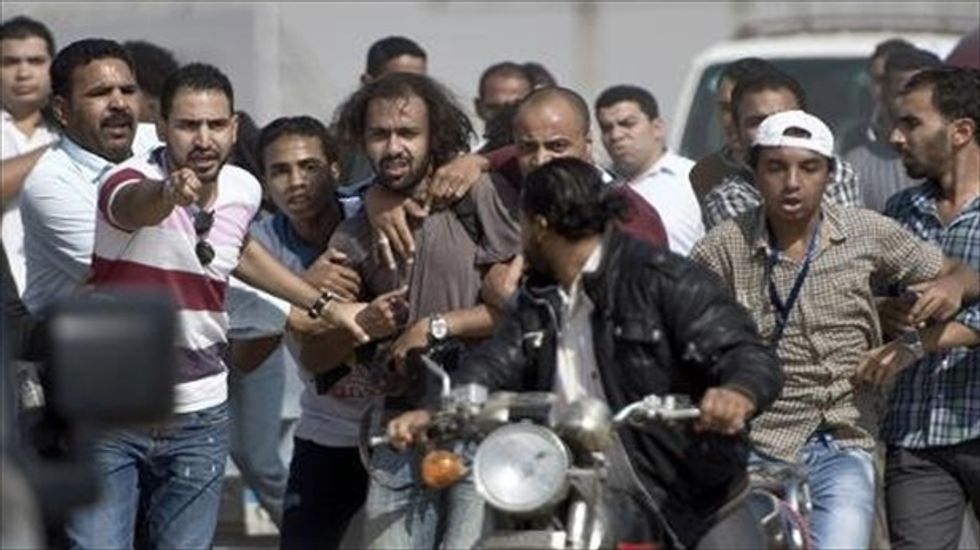 People help photographer Sabry Khaled (C-L) after he was beaten by supporters of the Muslim brotherhood outside the Police Academy, where his trial is taking place, on Nov. 4, 2013. [AFP]

The Reporters Without Borders watchdog on Tuesday condemned Egypt's arrest and military trials of journalists and denounced the suspension of a popular television show by a controversial satirist.

"This new wave of threats to freedom of information in Egypt is especially disturbing," the group said.

"Arbitrary arrests and hauling journalists before military courts constitute a danger to basic freedoms, as do prison terms, even if these are suspended."

Mohamed Sabry, Hatem Abul Nour and Ahmed Abu Derra have all been tried by military courts, with Sabry and Derra sentenced to six-month suspended jail terms and Nour receiving a one-year prison term.

Sabry was convicted by a military court in the Suez Canal city of Ismailiya for taking pictures in the town of Rafah on the border with the Palestinian Gaza Strip.

Nour was sentenced by a Cairo military court for impersonating an army officer over the phone, while Derra was convicted for reporting without authorisation in a military zone of the Sinai by Ismailiya military tribunal.

"These practices must stop, and journalists still jailed because of their professional activities must be freed immediately and unconditionally," Reporters Without Borders said.

The watchdog also denounced the suspension by the CBC channel of Bassem Youssef's popular talk show Al-Bernameg (The Programme).

Youssef, known as "Egypt's Jon Stewart" after modelling his show on the US comedian's popular satirical news programme, had returned to CBC on October 26 after a four-month break.

In that broadcast Youssef mocked the country's military which ousted Morsi, provoking fury and complaints from some viewers.

After that episode was broadcast his show was taken off the air on November 2, with CBC saying Youssef had violated its editorial policy.

"Complaints against comedian Bassem Youssef and the suspension of his show are especially regrettable,? Reporters Without Borders said.

"Freedom of satirically critical expression, especially in the context of a humour programme, must have a place in a country that aspires to democracy."