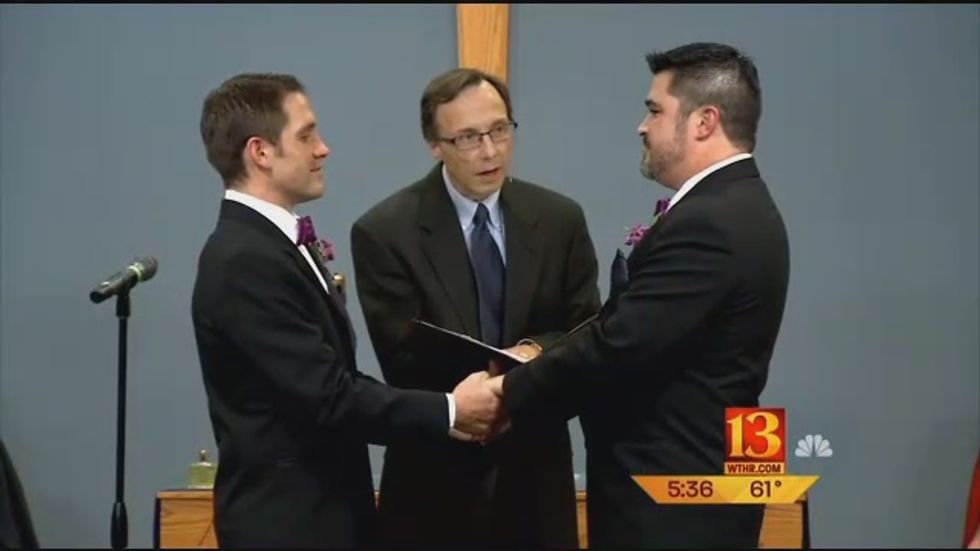 When Democratic councilor Zach Adamson recited his wedding vows at a multi-faith ceremony in Indianapolis last weekend, Republican Mayor Greg Ballard and wife Winnie were there in the front row to witness it.

Adamson and his long-time partner Christian Mosburg had gotten legally married in Washington, D.C. on Oct. 19, but they returned to Indiana -- where same sex marriage is banned -- last weekend to repeat their vows.

The Democratic councilor told WTHR that Ballard had "unwavering" support for equality issues.

"I know he takes a lot of heat for it considering his party, so it did mean a lot for him to be there," Adamson pointed out.

"The mayor was happy to be invited and happy to attend," Lotter explained. "It was a great day for Councilor Adamson and his husband and he was happy to celebrate with them."

Lotter added that the mayor opposed amending the state's constitution to ban marriage equality because it could undo recent benefits granted to same sex partners and it could have an economic impact on the city.

"It is something we're concerned about and city legal is looking into what the implications would be," he noted. "We do not want to do anything that would make our city seem like it's not a welcoming place for all people to come visit, live and work here."

Ballard had previously gone on record against the constitutional ban.

"It's already against the law so I'm not sure why they're trying to do that. The businesses, they don't like it, and I'm about jobs and I'd like to see people or businesses hire the best quality people they can so I'm not sure what the point of that is," he said earlier this month.

Democratic blogger Jon E. Easter, who attended the ceremony over the weekend, observed that it would have been hard to imagine a Republican mayor at the event just years ago.

"Twenty years ago, would you have dreamed that?" Easter wrote. "I mean, would that have seemed possible? The REPUBLICAN MAYOR of the City of Indianapolis sat in the front row of a ceremony celebrating a same sex union?"

"Believe it. It's 2013, and times have changed. Yesterday's ceremony was a powerful signal because it's no longer about oppression or repression here. It's about love, and we were all there because we love Zach and Christian."