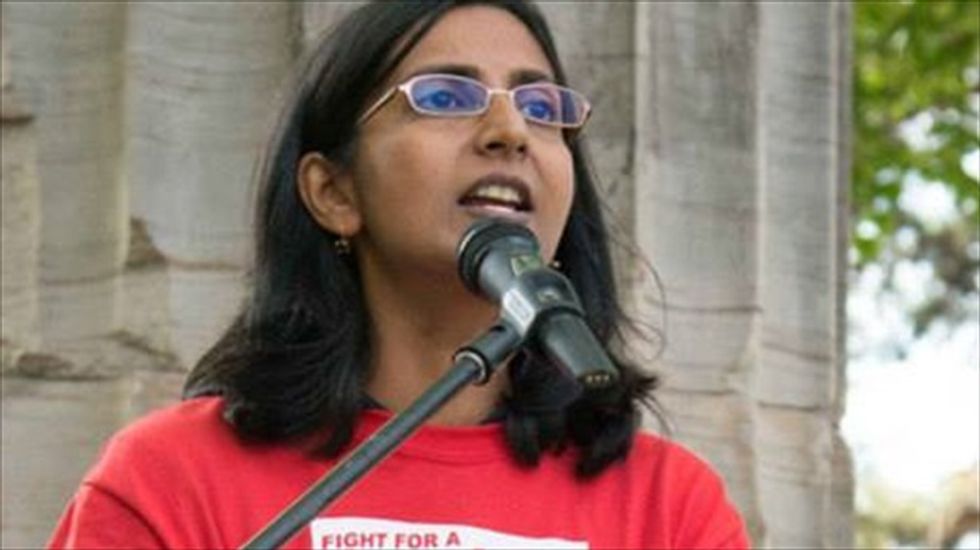 The election of Kshama Sawant, a socialist, to the city council of Seattle seems like dropping a pebble in the ocean – particularly given the Tea Party's inroads into Congress and the Republican hold on state legislatures. With one lone vote, we can't expect Seattle to collectivize Starbucks and Amazon anytime soon.

But her election does show that not only was she not afraid to be a socialist, people were not afraid of electing one. It's not just that socialism is coming into fashion; people are finding out that maybe they've been socialists this whole time and didn't know it.

Contrary to popular belief, Americans don't have an innate allergy to socialism. Milwaukee has had several socialist mayors, and there's currently an independent socialist in the US Senate, Bernie Sanders of Vermont. In 1920, Socialist Party presidential candidate Eugene V Debs won nearly 1m votes. In fact, some historians argue that the liberal achievements of the New Deal, such as Social Security, were the result of pressure from the growing popularity of the Socialist and Communist Parties. The achievements of the labor movement, such as the eight-hour work day, are the result of the agitation of radical unionists.

Senator Joe McCarthy and FBI Director J Edgar Hoover were successful in undoing a lot of that progress with their witch hunts. And it was easier during the most tense moments in the Cold War for the right to malign socialists, even if they were opposed to Soviet-style authoritarianism. The mere word brought to mind images of bread lines and secret police. American capitalism always looked good by comparison. Besides, no one likes a traitor.

But not only has the quality of American economic life vastly declined since the fall of the Berlin Wall, that horrific image doesn't exist anymore. Further, millennials, a demographic acutely and adversely affected by the economic downturn, have little to no memory of the hammer and sickle, and when one thinks where socialism exists in the world, they don't think of Russia, they think of social democracies like Denmark. Even Switzerland, a country most closely associated with the banking industry, is considering a universal basic income.

Without the ideological duel with the Soviet Bear, Americans are better able to understand socialism for what it really is: a system that ensures that wealth can provide food, housing, education and basic needs for the population. And more and more people – out of work, in debt and feeling betrayed by the promises of market capitalism – see that as a good thing.

It isn't just the Fox News anchors of the world who try to denounce any progressive economic policy as dreaded socialism. The American left has also had aversion to go all-in with the term. The 1999 protests against the World Trade Organization meeting in Seattle were called "anti-corporate", rather than "anti-capitalist" as similar protests Europe were called, broadly stating what activists were against, but not putting forth what kind of alternative economy they wanted to create. Occupy Wall Street, for all its progress in reigniting a conversation about economic equality, marked the ascendence of a brand of anarchist rhetoric that turned its back on unions and sought to avoid making demands on the state.

However, there's been a realignment. OWS did rekindle interest in Marxist theory. Even the business press is quick to unveil the inequality that exists as a result of financial deregulation. It's not a coincidence that in the airport town of SeaTac, near Seattle, voters approved a $15 per hour minimum wage, in part inspired by the recent wave of fast-food worker strikes. Kshama Sawant's ascendence signifies a movement that is tired of the same market solutions to every economic problem, which is the basic platform of both major American political parties.

Of course, people like Sawant have her enemies. Already, scruffy anarchists have taken to the Internet to denounce any socialist group for engaging with the corporate state and seeking reform of a broken system. Such an approach places ideological purity over the needs of actual people. Besides, the "in-the-streets" insurrectionists are largely fueled by testosterone, so nothing threatens them more than a smart, confident woman.

The great hope is not just that Sawant brings about new, progressive policies in Seattle, but that it inspires others like her; that it allows people to see that being labeled a socialist these days should be taken as a compliment.