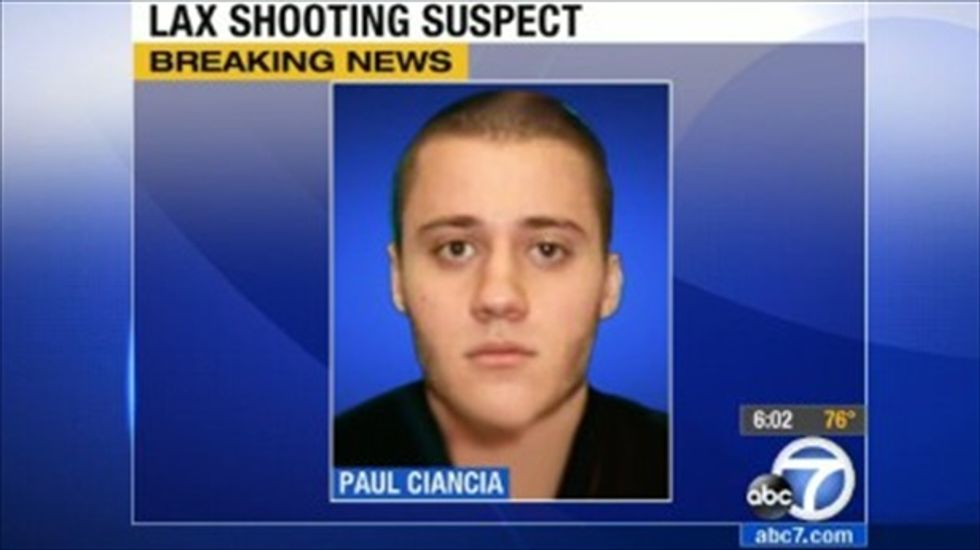 The note that 23-year-old Paul Ciancia carried with him as he charged into Los Angeles International Airport and opened fire on Friday reportedly referenced right-wing conspiracy theories amid homophobic rants about former Department of Homeland Security director Janet Napolitano and other government officials.

Raw Story noted on Friday that police reported that Ciancia was carrying a document that referred to the "New World Order," a favorite phrase of the conspiracy-minded right used to describe an amorphous group of world elites who seek to impose one world government on all people. Both Alex Jones and Glenn Beck have included the phrase in their rantings.

The SPLC said that "a knowledgeable source with ranking law enforcement contacts" had read Ciancia's manifesto and that its contents placed him squarely in the right-wing "Patriot" movement of anti-government conservatives.

Mark Potok of the SPLC's "Hatewatch" blog wrote, "So-called Patriots also increasingly see the DHS, which produces intelligence assessments of extremists that are distributed to other law enforcement agencies, as an enemy and even a collaborator in the New World Order conspiracy. Many believe DHS has targeted their movement and is somehow connected to the alleged construction of concentration camps by the Federal Emergency Management Agency (FEMA)."

The TSA, agents of which Ciancia targeted in his attack, is considered to be the most visible arm of the DHS. The attack on Friday killed 39-year-old Gerardo I. Hernandez and wounded six others.

Ciancia was shot in the chest multiple times by police and is currently receiving medical treatment under police guard.

Watch video about the attack from Friday night, embedded below via CNN: