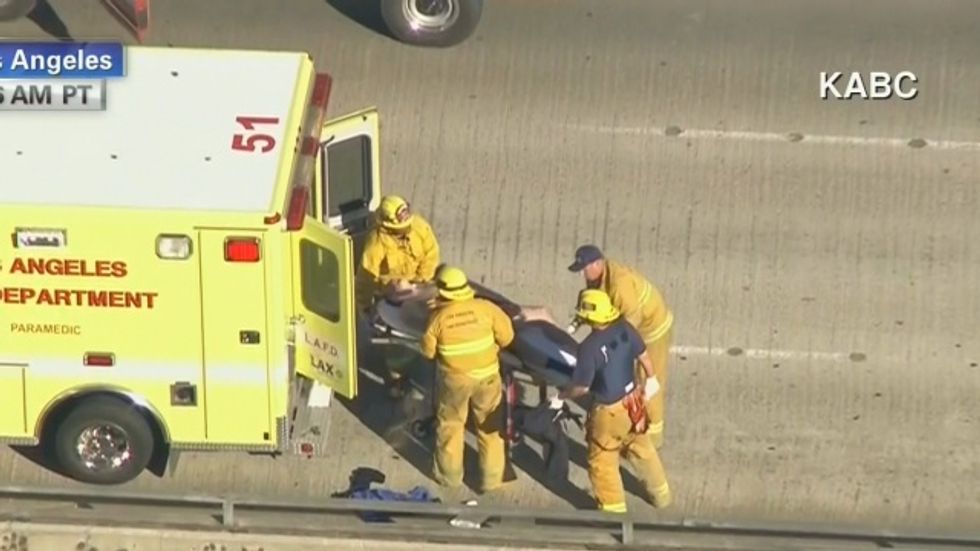 In 2012, 15 Americans were killed in terrorist attacks.

The previous year, more than 32,000 Americans died from gun violence (including homicides, suicides and accidents). That total represents an almost 2,600 person increase in gun deaths since 2001.

So, it shouldn't come as a surprise that the first Transportation Security Administration (TSA) agent to be killed in the line of duty was not slain by an al-Qaida terrorist, but rather by an American with a gun.

Gerardo Hernandez, who was shot and killed at Los Angeles International Airport (LAX) on Friday, was tasked with protecting Americans from a threat that barely exists. Instead, he died from a threat that we as a nation tacitly accept as a "price of freedom": practically unfettered access to firearms.

Twelve years ago this month, when Congress created the TSA, the threat from terrorism seemed real. Just two months earlier, 3,000 Americans had been killed by the worst terrorist attack in American history. Congress, acting with a level of responsiveness that in today's current political context would seem unimaginable, established a vast new federal bureaucracy to take responsibility for protecting airplanes and passengers from the supposed scourge of international terrorism.

Today, with a budget of nearly $8bn, the TSA employs almost 50,000 transportation security officers who screen the nation's air travelers. Yet, as incidents of terrorism directed at the United States have declined and al-Qaida's global reach has been constrained, the TSA's mandates remain in place. They've even been expanded, often in response to terrorist attacks or alleged plots.

When Richard Reid, aka "the Shoe Bomber", attempted to light explosives hidden in his shoes on a trans-Atlantic flight – and reports surfaced of other potential "shoe bombers" – it led to new rules "encouraging" passengers to take off their shoes at TSA checkpoints. In 2006, when a plot to bomb multiple trans-Atlantic flights with liquid explosives was foiled by British police, it brought new restrictions on bringing liquids on planes – and a shift to mandatory shoe screening. Even large printer cartridges were banned on planes after a foiled terror plot in which they were used to hide explosives.

No other form of domestic travel, like trains or buses, has the same level of security as is seen on airplanes. Considering that cockpit doors are now locked (one of several post 9/11 reforms that is, in fact, keeping Americans safer), and given that passengers are conditioned by the events of 9/11 to not respond in a docile fashion to a potential terrorist attack, the threat of in-air terrorism seems even more limited.

Then again, perhaps an abundance of caution is in order. TSA restrictions are frustrating and time-consuming, but they are hardly onerous. While there have been occasional complaints about the infringement on personal freedom and the inconvenience that TSA screening represents, Americans have, by and large, accepted their presence as the price that must be paid to protect the nation against terrorism.

This begs the question, however: why do Americans accept such restrictions – to combat a threat that barely exists – and recoil at the notion of placing similar restrictions on guns, which kill 2,000 times more Americans every year than terrorism?

America has the laxest gun laws in the developed world, more guns per person and the highest rate of death by firearms of any developed nation. The US also leads the world in mass shootings. As Mother Jones points out, of the 62 mass shootings that have taken place in the United States since 1982, three-quarters of the killers used legally obtained weapons.

While, mercifully, the gun ownership rate is in decline, millions of Americans continue to buy handguns for protection. This is the case, even though having a gun in one's home puts all those who live there at dramatically greater risk of dying as a result of gun violence – and provides negligible deterrent benefit.

Of course, there is little talk of banning all guns in the United States; rather, restricting the ability of people to purchase them. However, even that is too high a mountain to climb.

For example, the gun used in the LAX shooting was a .223-caliber assault rifle, a weapon that exists for only one reason – to kill multiple numbers of people (a similarity it shares with virtually all guns). There really is no justifiable reason for such weapons to be in the hands of ordinary citizens. And yet, as Senator Dianne Feinstein noted Sunday on "Meet The Press", it would be a virtual impossibility to pass a bill in Congress banning them.

It was seven months ago, after all, that the Senate blocked a measure to expand background checks on gun purchasers. That occurred the same week that a major American city was shut down because there was a wounded, unarmed, single terrorist on the loose.

In the wake of the Newtown school shooting that took the lives of 28 people, including 20 children, no major federal gun control regulation has been enacted. Meanwhile, two researchers who are compiling Slate.com's extraordinary and sobering gun death database estimate that more than 29,000 Americans have died from gun violence since that terrible day – a number dramatically higher than the more than 10,000 deaths officially reported (which, in itself, is a heartbreaking and appalling total).

There's been new research indicating that 500 US children are killed, and 7,500 are hospitalized, every year from gunshot wounds. None of this brings real policy change. In fact, in state senate recall elections in Colorado, two Democratic legislators were defeated because of their support for an earlier state bill that had placed restrictions on gun ownership.

In a sense, we're all complicit in the deep narcissism of gun-owners who demand that their absolutist definition of freedom (largely unencumbered access to firearms of all shapes and sizes) takes precedent over the carnage it causes every day in communities across America.

The irony of our divergent responses to terrorism and gun violence is that the shooting in LAX was, by any meaningful measure, an act of terrorism. According to a note found in the possession of the shooter, he made "a conscious decision to kill multiple TSA employees". The note reportedly stated that he wanted to "instill fear into their traitorous minds", and he allegedly "claimed the TSA treats Americans like terrorists even though all people aren't equally dangerous".

Now, of course, if the shooter had screamed "Allah Akbar" as he needlessly took the life of TSA agent Gerardo Hernandez, or if he had had links to an al-Qaida terror cell, there'd be no question about how to describe this incident. Moreover, there would almost certainly be a major policy response.

In fact, if this latest act of gun violence were described accurately as terrorism, it would perhaps lead to the same quick response that led to the creation of the TSA. How else to shake Americans and their elected leaders from their collective slumber over the menace of gun violence?

But don't bet on it happening. This shooting, like the approximately 85 other acts of gun violence that take an American life every single day, will almost certainly lead to the same policy result to which we've become far too accustomed – even inured to – in this country.

But at least we'll be safe from the terrorists.