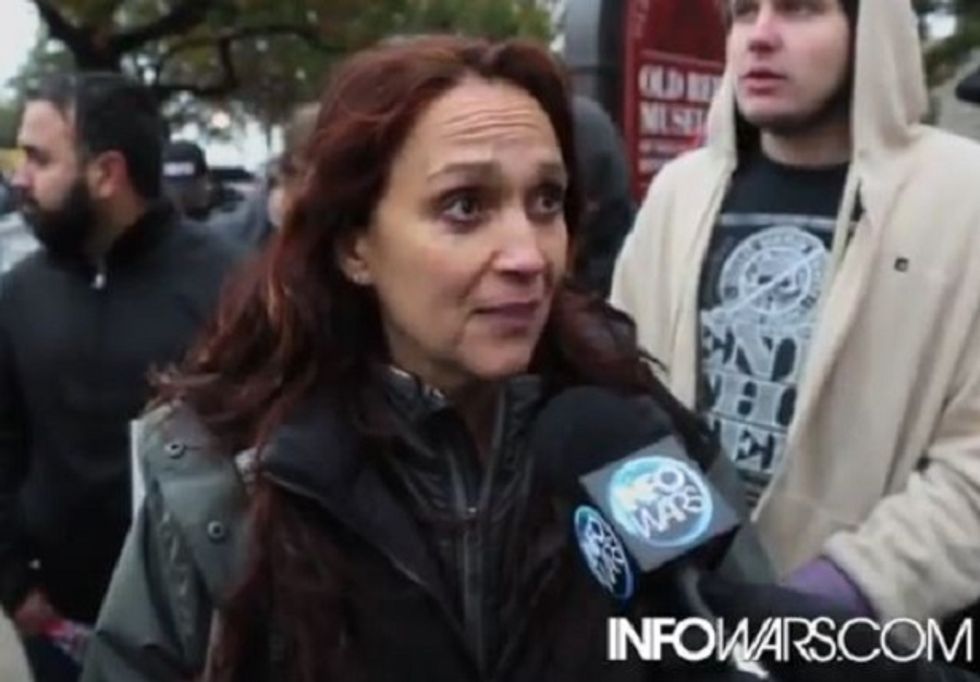 The Austin-based radio talker was in Dallas on Friday to lead a march in protest of the city's official events to mark the 50th anniversary of the assassination John F. Kennedy. With chants like "Stop the cover up!" Jones and his followers marched, until at some point, deputies wanted them to move to another location. Some pushing ensued, and Jones and his fans then erupted in lengthy tirades at the cops, who ended up arresting no one.

Yesterday, a new video (see below) emerged from the event with a surprising participant: Vivian Kubrick, daughter of the late great filmmaker, Stanley Kubrick, and apparently a fan of Jones, who appeared to be starstruck.

In the video, Jones and Kubrick engage in a gushing tribute to her father’s films as they discuss their shock at the behavior of the Dallas deputies and make dire predictions about the "tyranny" of President Obama.

Not once in the 25-minute video, however, is Vivian’s dedication to Scientology ever brought up, nor does either of them mention that her commitment to L. Ron Hubbard’s church caused her to cut off all ties with her famous father in 1999, as he was editing his final film, Eyes Wide Shut. (He died that March, four months before the film opened in July.)

In fact, some knowledgeable folks have theorized that some of the pain that runs through Eyes Wide Shut was inspired by Kubrick’s feelings of loss after Vivian “disconnected” from her family, as Scientologists often do.

Vivian reportedly showed up at her father’s funeral with a Scientology handler. Her separation from the family only deepened after that, and when her sister Anya died of cancer in 2009, Vivian didn’t show up at the funeral, even though she and her sister had been inseparable as children.

Vivian’s disconnection was keenly felt by her famous father, who had been treating her like a protege. She filmed a documentary about the making of her father’s horror classic, The Shining, while she was only 17, and composed the score for Full Metal Jacket at 24. But she turned down his offer to help with Eyes Wide Shut as she dedicated herself to Scientology.

“Stanley asked Vivian to compose the score, but at the last moment she said she wouldn’t,” Kubrick's widow Christiane told the Guardian in 2009. “They had a huge fight. He was very unhappy. He wrote her a 40-page letter trying to win her back. He begged her endlessly to come home from California. I’m glad he didn’t live to see what happened.”

In the video, it's unclear whether Alex Jones was aware of that history. He repeatedly drops in references to Stanley’s movies as he eggs on Vivian during her anti-government spiel.