Walmart on Black Friday: Scenes from the apocalypse 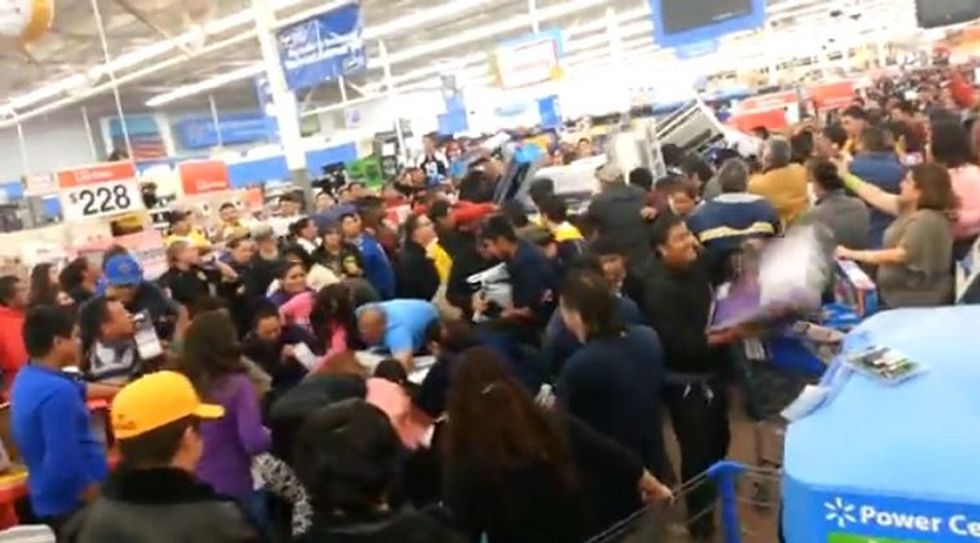 A Sheriff's department in western Virginia confirms this morning that a scuffle over a parking spot at a Walmart in Tazewell County resulted in a stabbing, which is, of course, how we know that the holiday shopping season is upon us.

We're collecting videos and tweets of the Black Friday madness this morning.

We'll begin in Mayaguez, Puerto Rico, which experienced a stampede for savings!

This video has been popular this morning, showing a manic shopper pushing through a crowd like a fullback sniffing the end zone...

Here's a scuffle over something -- tablets? -- which results in an arrest that a Walmart employee doesn't want filmed...

And here's a frenzy over some Rachael Ray cookware in Tennessee...

Things were going great for Amy...

Not only is Walmart practically empty, there is SO MUCH STUFF left! Kind of shocked.

But not so well for this guy...

This Walmart is advertising $9.99 iPads to anyone who throws their baby into a snakepit.

i swear my mommy is the best she got us the last tv at Walmart ! merry tristmas to us

About to go into Walmart, pray for me.

Hang in there, Kaylyn...

Going on 3 hours in line for iPhone. Walmart get your crap together, I should not be besties with the strangers in line #Survivin

They are laughing at me bc I went to Walmart last night and only bought pajamas and socks. Lol.

Been standing at Walmart for two hours for my brother to get a phone... #thestruggleisreal #BlackFriday

And amid the madness, life goes on...

That awkward moment when you see your ex's parents at Walmart and you look like you just rolled out of bed.

Just overheard two co-workers agreeing together that "how can you not love Wal-Mart?!" Barf. I can think of every reason under the sun.

Hold it together, Jerod...

Going on 3 hours of waiting at Walmart for my Iphone upgrade. :(

Carmen's life will never be the same...

All I came for was this, walmart you ruined my day and my nephews Christmas I hope you're happy

And some were inspired...

i start a business, make it a walmart-like store or something

Injured in the line of duty...

Someone forgot what day it is...

Last time I ever go into walmart early to get milk.

Just made some awesome waffles with my $4.50 waffle iron, courtesy of walmart's #BlackFriday.

No dad your not allow to just start singing in walmart

But think of the savings!