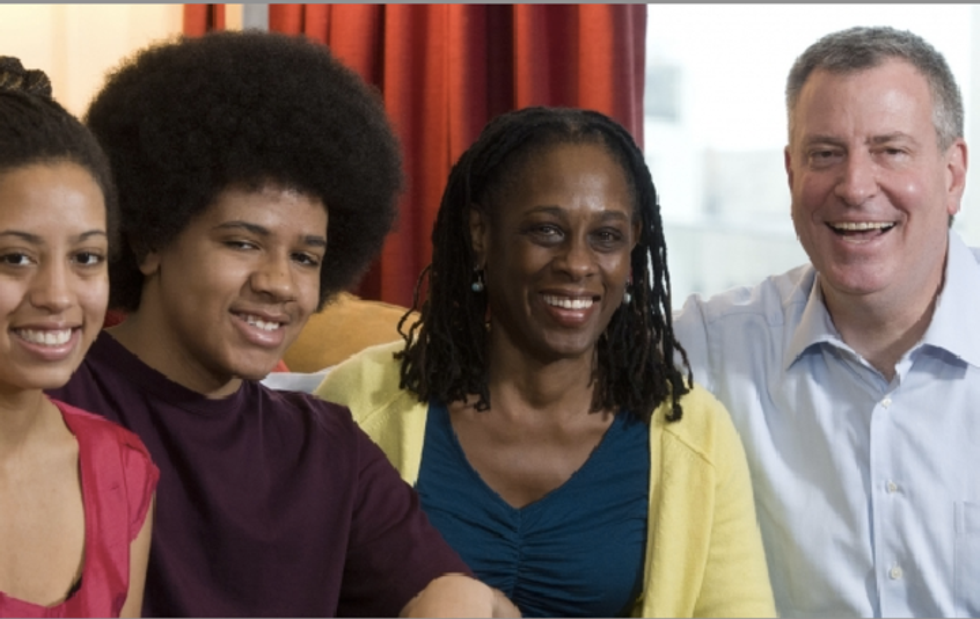 The Washington Post's ostensibly liberal columnist Richard Cohen set off a ruckus on Monday with his latest column, in which he said that the family of New York City's mayor-elect Bill de Blasio is unconventional enough to be physically revolting to average Americans.

In a piece entitled "Christie's tea-party problem," Cohen issued a standard set of Beltway bromides about the state of the 2016 race and the extent to which the Republican Party could be hobbled by far-right factions within its ranks. Then, in his seventh paragraph, Cohen took off on a tin-eared tangent about the New York City mayoral race.

"Today’s GOP is not racist, as Harry Belafonte alleged about the tea party," Cohen said, "but it is deeply troubled -- about the expansion of government, about immigration, about secularism, about the mainstreaming of what used to be the avant-garde. People with conventional views must repress a gag reflex when considering the mayor-elect of New York -- a white man married to a black woman and with two biracial children. (Should I mention that Bill de Blasio’s wife, Chirlane McCray, used to be a lesbian?) This family represents the cultural changes that have enveloped parts -- but not all -- of America. To cultural conservatives, this doesn’t look like their country at all."

Critics have called Cohen's judgment into question, as well as his use of the word "conventional" to describe racist, reactionary viewpoints.

Salon's Brian Beutler sarcastically tweeted, "Nothing racist at all about throwing up in your mouth a little when you see biracial couples."

"I'm sure there's some market niche for columns denouncing miscegenation and race mixing, but is it really the Washington, D.C. market?" asked Slate's Matthew Yglesias, suggesting that the Post might start its new path out of bankruptcy by first firing Richard Cohen.

"Obviously eliminating Cohen-related expenditures would not, on its own, bring the Post to solvency," he said. "But every little bit helps."

Cohen has a history of controversy at the Post. In 1998, the newspaper mediated between Cohen and a 23-year-old female intern in a sexual harassment incident. Cohen reportedly told the new intern to "stand up and turn around" so he could see why she was hired. In the end, the Post fired the intern and kept Cohen.

In the last year, Cohen has penned columns blaming Miley Cyrus and the "twerking" dance craze for rape and sexual assault of women, as well as another piece in which he said he understood and sympathized with gunman George Zimmerman, who shot and killed unarmed teenager Trayvon Martin in 2012.

UPDATE: Washington Post opinion editor Fred Hiatt responded to the fracas by saying that he could have edited "one sentence more carefully." According to Talking Points Memo, Hiatt told "The Wrap" that he supports Cohen and doesn't believe that he's a racist or that he intended the column to be racist.

“Anyone reading Richard’s entire column will see he is just saying that some Americans still have a hard time dealing with interracial marriage. I erred in not editing that one sentence more carefully to make sure it could not be misinterpreted," said Hiatt, leaping to Cohen's defense.

“I think he is a terrific columnist,” Hiatt continued. “I’m very happy to have him in the Post.”

Not everyone is so sanguine about Cohen. Ta-Nehisi Coates at The Atlantic wrote, "Right. I’m not racist. I just don’t recognize my country. Also, the sight of you, and your used-to-be-lesbian black wife, and your brown children make me sick to my stomach. It’s not like I want to lynch you or anything.”

At Think Progress, Zack Beauchamp, in a thorough and thoughtful piece about Cohen's history of racism, sexism and homophobia, wrote that the columnist's work boasts a "deep simple-mindedness," and that it is its "total incuriosity about a changing world that makes Cohen uniquely odious."

UPDATE: After refusing to comment on the column for much of Tuesday, Cohen opened up to Huffington Post, saying that the controversy is "hurtful" to him and that he has been misconstrued.

"I didn't write one line, I wrote a column," Cohen insisted. "The column is about tea party extremism and I was not expressing my views, I was expressing the views of what I think some people in the Tea Party held."

He then hastened to assure Huffington's Ryan Grim and Katherine Fung that he didn't mean that the way it sounded.

"I don't think everybody in the Tea Party is like that," he said, "because I know there are blacks in the tea party. So they're not all racist, unless I'm going to start doing mind reading about why those black people are there."

He said that he is not a racist, although he has been criticized for insensitivity on race issues in the past. That, he said, is only because he's not some cookie-cutter liberal who believes lock-step in the orthodoxy of liberalism.

"Every once in a while I take an unconventional stance as a liberal," he said, and that lands him in hot water. But really, it's just because he's being held to an unfair standard.

"If someone on the right wrote this, no one would care," Cohen asserted. "No one would make a big deal about it but because I veer every once in awhile from orthodoxy, or maybe more than once in awhile, I get plastered this way."