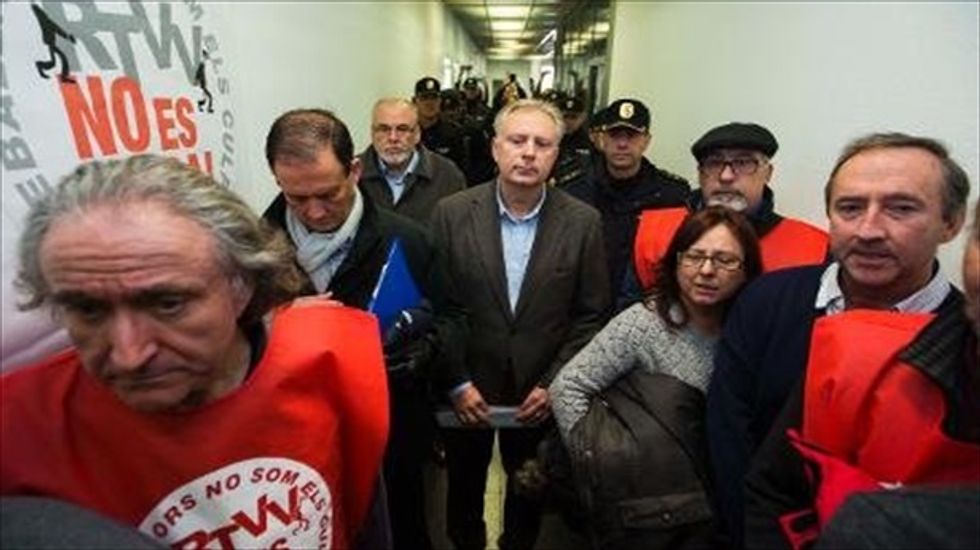 A debt-laden Spanish television station went abruptly off the air on Friday, apparently cut off by authorities as laid-off staff protested live in defiance of orders to shut it down.

The Valencia government run by the conservative Popular Party ordered the region's loss-making public broadcaster RTVV to be shut down but staff refused to go quietly.

When the regional government published "the law for the elimination, dissolution and liquidation" of RTVV on Thursday, the workers launched a live protest broadcast through the night.

In one programme, the backdrop was a cross above the words: "Here lies RTVV, abused, exploited, manipulated and killed by the Popular Party".

But live pictures on the channel on Friday showed police and bailiffs present in the channel's headquarters and at 12:19 pm (1119 GMT) the picture went black.

Workers had managed to block several attempts during the night to take them off the air, said Salut Alcover, deputy head of the staff representatives' committee for Radio Television Valenciana (RTVV).

"It has been a very sad night but at the same time unforgettable and emotional for this company because we, the staff, continue to broadcast," she had said ahead of the shutdown.

Police officers had deployed during the night outside the television station's headquarters, pictures published in the media showed.

The RTVV Internet site was not available from mid-morning on Friday.

Workers had been running protest programmes since the closure plan was first announced early in November.

Valencia's regional government had tried to fire 1,000 of the 1,700 workers at RTVV but staff successfully challenged the procedure in court.

Valencia's government said it could not afford to comply with the court order to bring back the laid-off workers.

Instead it announced on November 5 a decision to shut down the operation entirely.

It said the channel was staggering under debts of more than a billion euros ($1.4 billion).

It was the first shutdown of a regional television station in Spain's economic crisis.

Alongside the national broadcaster Television Espanola, Spain also has 13 regional public television stations, some of which have several channels.

Watch video from the protest, posted online on Friday, below.