Another Reminder: Feminism Is Not A Birthday Party Thrown For You By Your Mother 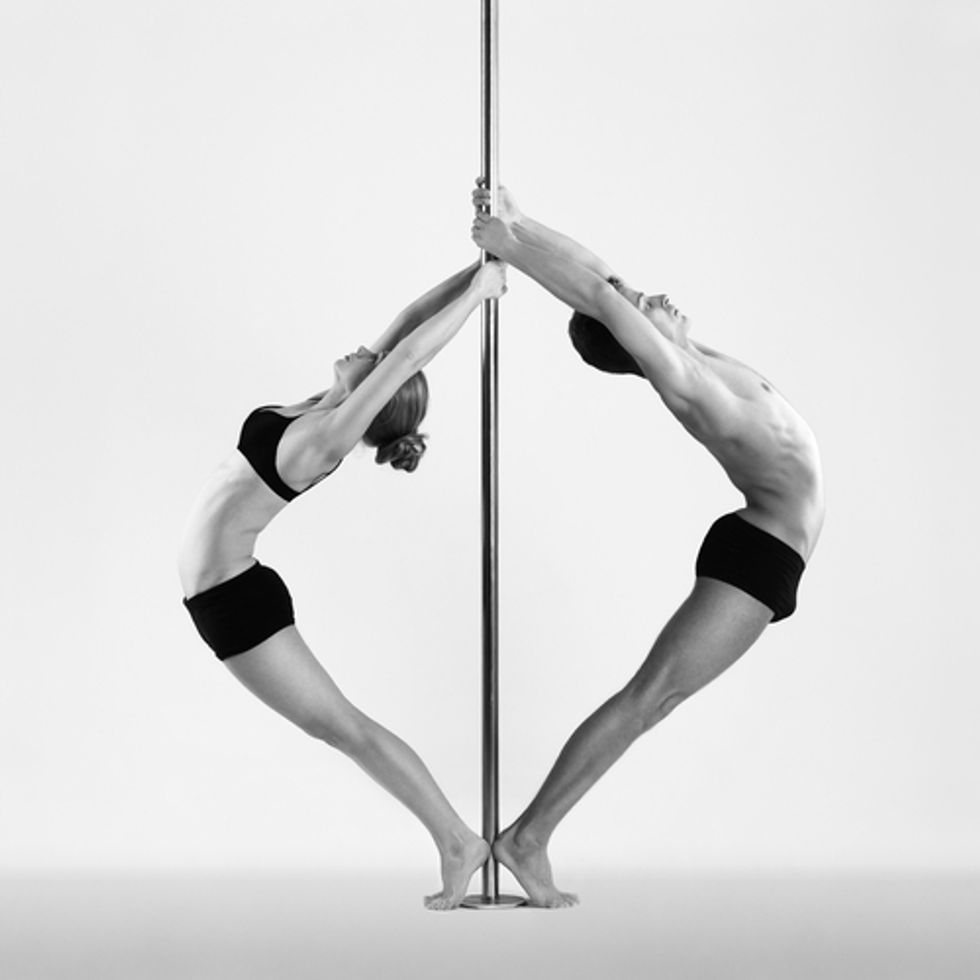 Let's stop fussing and everyone get naked.

Callie Beusman of Jezebel has this piece about the supposed overuse of the phrase "slut-shaming" up and boy hoo did it rub me the wrong way. Not that she's wrong that it's  overused or that it's being employed, as jargon often is, to avoid having to think very deeply about what you're really trying to say. But because I really hate that "everyone is wrong, a pox on both your houses, the grown-ups are here to explain how everyone needs to get along" tone her piece takes. It really hits a nadir right around this paragraph:

Furthermore, the proliferation of "slut-shaming" has resulted in an inaccurate conflation of "being critical" and "prudishly or maliciously taking issue with female sexuality." Not all criticisms of public displays of sexiness are meant to shame, which is something many people seem to have lost sight of. In the past few months alone, several high profile and self-proclaimed feminist pop culture figures have been accused of "slut-shaming" by hoards of dissenting sex-positive women and men. Sinead O'Connor was accused of it; Annie Lennox was as well, and so was Rashida Jones (more on her hot mess of an essay later). If these accusations of slut-shaming led to a nuanced discussion of the ways in which we interpret, discuss, view, construct and consume public displays of female sexuality, I would have absolutely no problem with that. But all too often, "slut-shaming" is used to police women... for policing other women, which is just hypocritical.

Time for another reminder that feminism is not a birthday party thrown for you by your mother. Callie seems to be under the impression that there's some great feminist principle against "policing", i.e. criticizing, other women. (In a piece where she is critical of pretty much every woman in sight that is not herself.) It is not. The reason that policing sexuality is wrong is that people who do it never actually have a good argument for why consensual sexual activity amongst adults is wrong. They are operating on a "it just is" and "ew, you're not a lady" to justify themselves. Meanwhile, criticizing people for making idiotic anti-sex arguments is a perfectly defensible position. You can point out that it reduces the amount of happiness in the world and increases the amount of shame for no good reason. Feminism is not and has never been about giving women a free pass from criticism. Perhaps these points could be argued better---I myself am not a fan of how much online feminism is poorly argued, jargon-filled ramblings---but the problem with "policing sexuality" isn't the policing part, but the hostility to sexuality that leads to policing. Being hostile to prudes, however, is a perfectly defensible position.

I take Callie's point, I really do, that people fall too easily on "nuh-uh" and "you're mean" as arguments instead of actually hashing out ideas. But man, this is not the way to write about the issue:

The series of fitful debates about whether someone is "slut-shaming" a public figure can be seen as the feminist equivalent of smarm. As defined by Tom Scocca, smarm is "an assumption of the forms of seriousness, of virtue, of constructiveness, without the substance. Smarm is concerned with appropriateness and with tone." Both sides of the slut-shaming debates are smarmy. In condemning a public figure for objectifying herself and profiting off of her own sexuality, you ignore the larger context in which her actions take place, and you attack a woman personally as a some kind of brainwashed dupe of the patriarchy, as someone who thoughtlessly harms women by complying with destructive sexual norms. Conversely, in accusing someone of slut-shaming a public figure, you dismiss their tone as judgmental and not sex-positive. You characterize them as prudish and a bad or backwards feminist and, as such, you don't deign to engage with the content of what they're saying. All this talk of "slut-shaming" causes us to plow blindly through nuance and to get worked up over distracting trifles. When we tell women that it's ignorant or old-fashioned to feel uncomfortable with over-sexualized depictions of women in the media, we lose sight of the context in which those depictions take place. Because of this, the way we tend to talk about "slut-shaming" can be harmfully reductive.

There's a great irony in accusing people of smarminess when you're trying to get them to button up and play nice with people they disagree with. Or buying into the tedious trope that unfortunately proliferates amongst feminists and liberals that feelings are an argument. You can feel "discomfort" with young women shaking their thing on camera as much as you want. But if you're against it, argue against it. The routine trotting out of the term "objectification" without really understanding it is probably a much worse problem than errant use of the term "slut-shaming".

Her entire accusation rests on the assumption that there weren't actual points being made. But look at the Miley vs. Sinead thing and you'll see that's not true. Say what you will about Sinead O'Connor, but her argument was crystal-fucking-clear: Overtly sexual displays as part of your pop brand degrades women and you have a moral responsibility, as a woman, not to engage in them for the good of the sisterhood. And Miley's argument was also crystal clear: I am sexy because I think it's fun and it makes me money and, contrary to your claim that I'm being whored out, I'm actually in charge here. These are substantive arguments. It's really okay if self-identified feminists have substantive disagreements on these issues.

Saying that feminist discomfort with commoditized sexiness is automatically "shaming" encourages a "you're either with us or against us" logic. It facilitates sweeping value judgments: i..e, Lady Gaga's thong is either good for women or it's bad for women; Miley Cyrus' naked music video is either empowering or objectifying. But there's power in recognizing that a specific performance of sexuality can be at once subversive and pandering: yes, a pop star's decision to wear a thong and twerk and flaunt her sexuality can be a celebration of the female body and of female sexual agency; yes, it can be an inspiring rejection of the misogynistic notion that women should behave chastely and "appropriately" in the public sphere. However, such decisions occur in a very specific context. The entertainment industry has a history of commoditizing female sexuality and objectifying women in order to market the idea of sexual availability. When Miley Cyrus, Lady Gaga, Rihanna, Ke$ha, Nicki Minaj, Katy Perry, et. al. make overtly sexual music videos and put on blatantly erotic performances, it's both a reaction against prohibitive, oppressive attitudes about female sexuality and a canny response to the established fact that (young, heterosexual, female) sex sells. We don't have to choose between Team Empowerment and Team Oppression in reacting to that.

Of course, Sinead O'Connor and Rashida Jones did, in fact, straight up shame women in an effort to get them to change their behavior. The word "whore", I do believe, was used by both. Shame can be a useful rhetorical device. For instance, everything that Sarah Palin has to say is shameful. The problem here isn't the shaming part, but what's being shamed. Is it really so terrible if a pop star gets sexy?

Worth noting she doesn't link anyone making the argument that the all-sex-all-the-time pop star universe is problem-free empowerment. Perhaps because that argument isn't being made, and the pox-on-both-your-houses claim falls apart if one of the teams you're mad at doesn't exist. I haven't seen any defenders of the sexy pop stars who haven't made the point that there's economic pressure to be a certain way and that it's hard to fall outside of that norm if you want to make money. I'm probably as far out on Team Sexy as you get---I'm of the opinion that pop music is about sex and even in a perfectly egalitarian world, pop stars will be getting naked for our pleasure---and even I would cheerfully point out there's a terrible double standard where men are mostly clothed and women are mostly naked.

Yeah, just tossing the term "slut-shaming" around all the time instead of making an argument is a bad idea. So here, I'll just go ahead and make the actual argument. Feel free to cut and paste, as long as you remember to quote me: Life can be bleak and hard. We deserve our diversions, particularly with pop music. Sex is a legitimate source of pleasure, and it belongs in pop music. The problem isn't that stars are sexually expressing themselves and trying to kick your tired libido back to life. The problem is that only women are doing it and men need to step up their game. Got it? Now quit yer hand-wringing. Jesus.