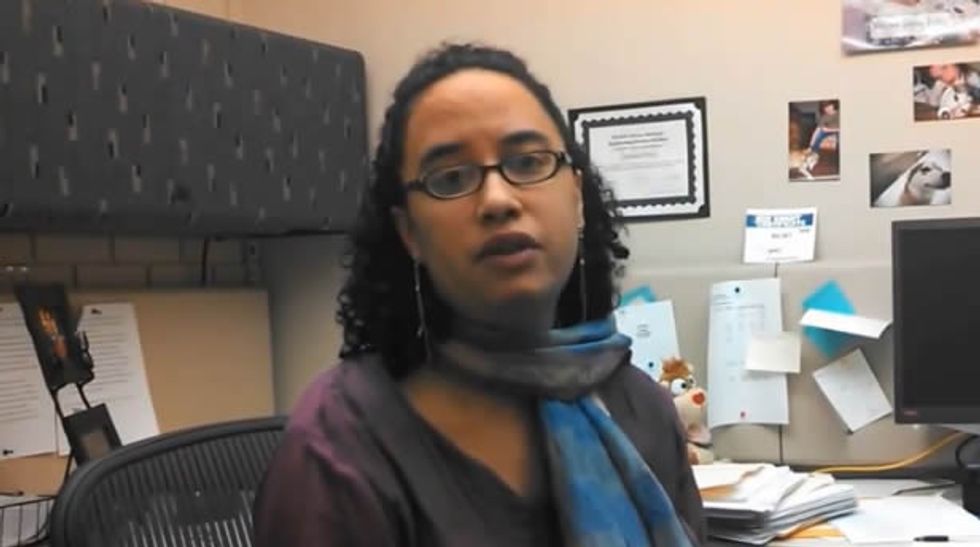 A faculty member at Minneapolis Community and Technical College, Shannon Gibney, received a formal reprimand for her handling of a discussion about structural racism in her Introduction to Mass Communication course.

She claims she was shocked, because "[h]is whole demeanor was very defensive. He was taking it personally. I tried to explain, of course, in a reasonable manner -- as reasonable as I could given the fact that I was being interrupted and put on the spot in the middle of class -- that this is unfortunately the context of 21st century America."

Gibney says another white male student followed the first, saying "Yeah, I don't get this either. It's like people are trying to say that white men are always the villains, the bad guys. Why do we have to say this?"

When Gibney attempted, again, to inform the students that they were mistaking a systemic critique for a personal attack, the students continued to argue. Eventually, she told them that "if you're really upset, feel free to go down to legal affairs and file a racial harassment discrimination complaint." This is exactly what they did.

Gibney is familiar with white male students taking discussions about structural racism as personal attacks, as it has happened before: in a 2009 incident, an editor of the school newspaper took offense at a similar discussion. In both that case and this one, Gibney received an official reprimand. After the latest accusation, the Vice President of Academic Affairs appended a letter to her file, in which he said he found it "it troubling that the manner in which you led a discussion on the very important topic of of structural racism alienated two students who may have been most in need of learning about this subject."

"While I believe it was your intention to discuss structural racism generally," he continued, "it was inappropriate for you to single out white male students in class. Your actions in [targeting] select students based on their race and gender caused them embarrassment and created a hostile learning environment."

Gibney told lawyers at an investigatory meeting for an anti-discrimination lawsuit she and six other professors are filling against MCTC that the vice president's words "have helped those three white male students succeed in undermining my authority as one of the few remaining black female professors here."

Watch Gibney's explanation of the incident below.