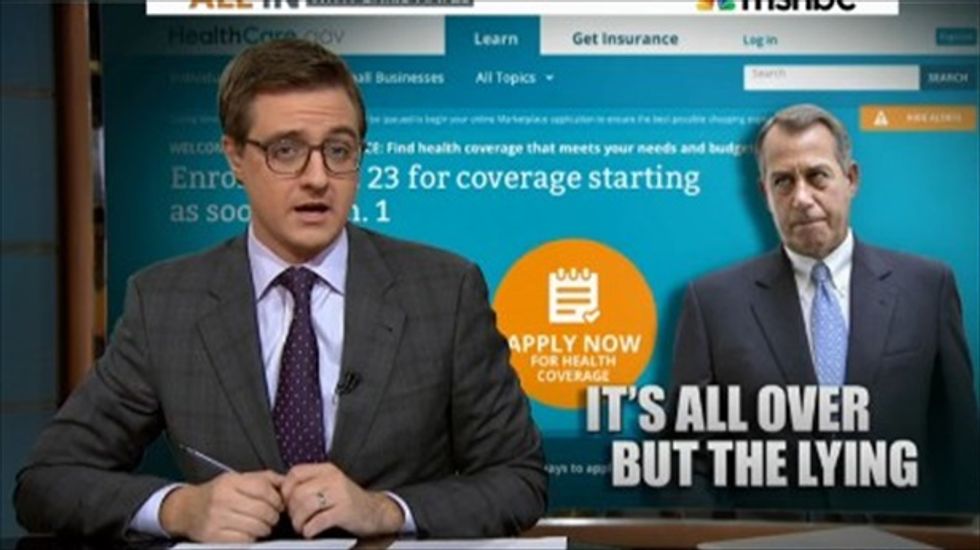 MSNBC host Chris Hayes couldn't help but laugh at times at the story of a Long Island father's debunked claim that his toddler was denied coverage under the Affordable Care Act.

"If you thought that, yes, I would hate the law and the president, too," Hayes told Media Matters writer Eric Boehlert on Wednesday. "If it were the case that Obamacare just capriciously denied an 18-month-old coverage, then that would be a terrible law."

Hayes conceded that the New York Post report on Cornelius Kelly's allegations that his state health care exchange would cover everyone in his family except his 18-month-old daughter sounded like "the worst Obamacare story yet," and became not only Fox News fodder, but the subject of a critical Twitter post by House Speaker John Boehner (R-OH).

"You might be asking yourself the question that any journalist writing about it, or producer putting together a TV segment about it, or just person with basic literacy and common sense would surely be asking," Hayes said. "Which is, 'Could it possibly be the case that Obamacare was denying coverage to a toddler?"

As it turned out, he said, it was not. Capital New York debunked Kelly's claim, reporting that not only did Kelly forget to identify his 18-month-old while applying for the exchange, but that he was a failed conservative candidate in Suffolk County, New York. It also turned out that officials corrected his mistake and enrolled his family in a health plan before Kelly said otherwise in an interview with Sean Hannity. (Though, technically, Hayes' show website also erred, misidentifying Boehlert as Eric Boehner. Oops.)

Hayes also criticized conservative media outlets for manipulating peoples' concerns over the new law for the purposes of fueling their own narratives.

"I say this to conservatives and I say it about the website and I will say it again, to those of you watching," Hayes offered. "If you think it's so bad, it's just gonna play out in your favor. And that was true about the website. I kept saying, 'Don't shut down the government, let the website launch.' And it did play out in their favor, 'cause the website didn't work."

However, Hayes also noted that the government's healthcare exchange website was performing at a smoother rate, fulfilling White House predictions, and enrolling 29,000 over the first two days of December, compared to 248 total enrollments on Oct. 1 and 2.

Hayes and Rep. Keith Ellison (D-MN) also argued that as the exchange program itself gains more clients, the paranoia fueled in part by the website's early hiccups and conservative reporting will diminish.

"As time goes on, they're gonna be dependent on these sort of made-up stories, like this fellow that you were just talking about," Ellison told Hayes. "But the numbers are gonna be more in favor of the law."

Watch the segment, as aired on Wednesday on MSNBC, below.