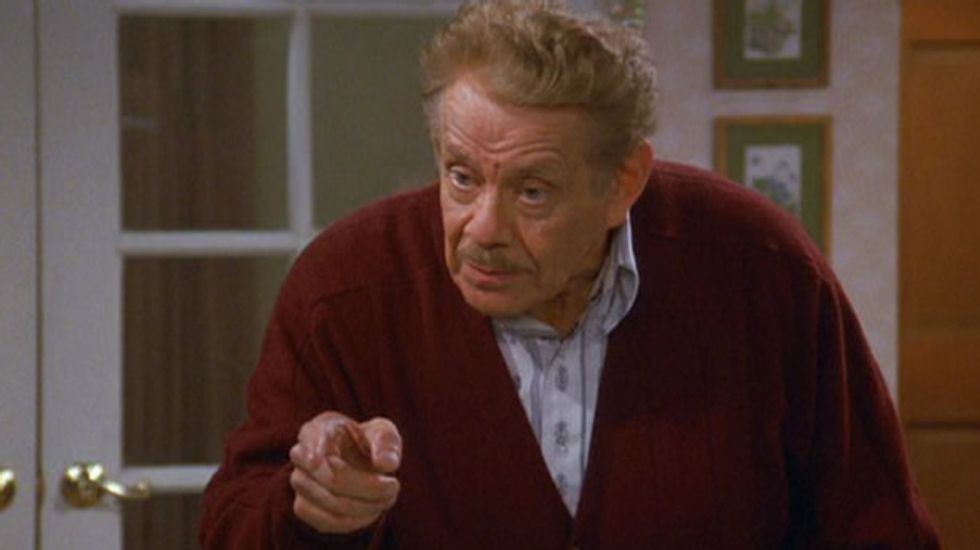 Jerry Stiller, who plays Frank Costanza, in a scene from "Seinfeld" (YouTube)

The holiday originated in an episode of Seinfeld called "The Strike," in which George Costanza's father, Frank, describes how he became disillusioned with with the holiday season.

"Many Christmases ago, I went to buy a doll for my son," he tells Kramer. "I reach for the last one they had -- but so did another man. As I rained blows upon him, I realized there had to be another way!" So he invented another tradition, "a Festivus for the rest of us!"

One of the traditional elements of the Festivus celebration is "the airing of grievances," which Frank demonstrates by yelling, "I got a lot of problems with you people, and now you're gonna hear about it!"

Last night, Rand Paul announced he would be participating in this Festivus tradition:

In honor of Festivus, tomorrow I will be airing my grievances, mostly against Washington. Check back here in the morning.

The majority of his grievances were boilerplate conservative complaints, such as:

Fed policies make you poorer, and hurt the poor and middle class the most. Ridiculous monetary policies increase the costs of goods.

But then it got personal:

At which point, Cory Booker decided it was time to move on to the next traditional Festivus activity:

U, me & "feats of strength:" Senate floor, name the time MT @SenRandPaul A Festivus grievance re bipartisanship. Booker doesn't RT me enough

Paul promised he would return with more grievances later today.

Watch the origin of the traditional Festivus celebrations below.