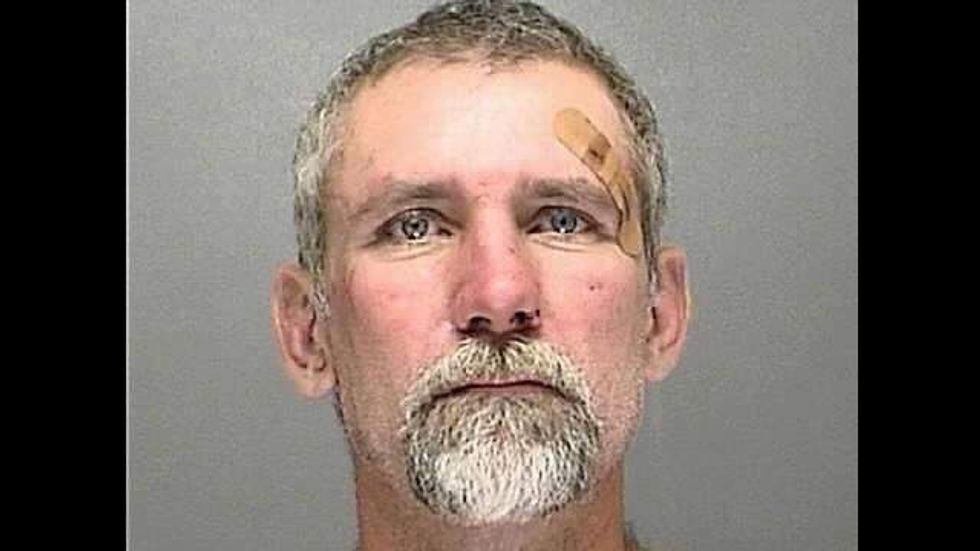 A 44-year-old Florida man is custody after being accused of throwing pieces of bricks at children and shouting racial slurs at them before trying to escape from police on his ex-wife's bicycle.

According to The Daytona Beach News-Journal, police responded to a Dec. 16 call that Larry Kenton was drunk and causing as disturbance at his ex-wife's home.

The ex-wife told officers that Kenton had come to get some of his belongings. She said she asked him to go away, but he forced his way into the house anyway.

Kenton began arguing with his daughter because he did not approve of her dating an African-American youth and referred to her as a "n*gger lover," according to the arrest report.

As he was exiting the home, he apparently saw the boyfriend and shouted, “You are the one!"

Kenton was accused of hitting the boy in the face and the head, and then choking him. Police said that he then picked up a brick and used it to strike the boy in the back of the head.

After an unidentified man came to assist the boy, Kenton began shouting racial slurs at nearby children and throwing pieces of bricks at them. The arrest report said that at least two of the children were hit.

Police said that Kenton hopped on his ex-wife's bicycle and attempted to flee from them, but was quickly caught. He faces charges on multiple counts of aggravated child abuse, resisting an officer, driving under the influence, driving with license revoked and battery. He was also charged for having an unregistered motor vehicle.

Kenton remained in the custody of Volusia County Corrections without bond as of Thursday.