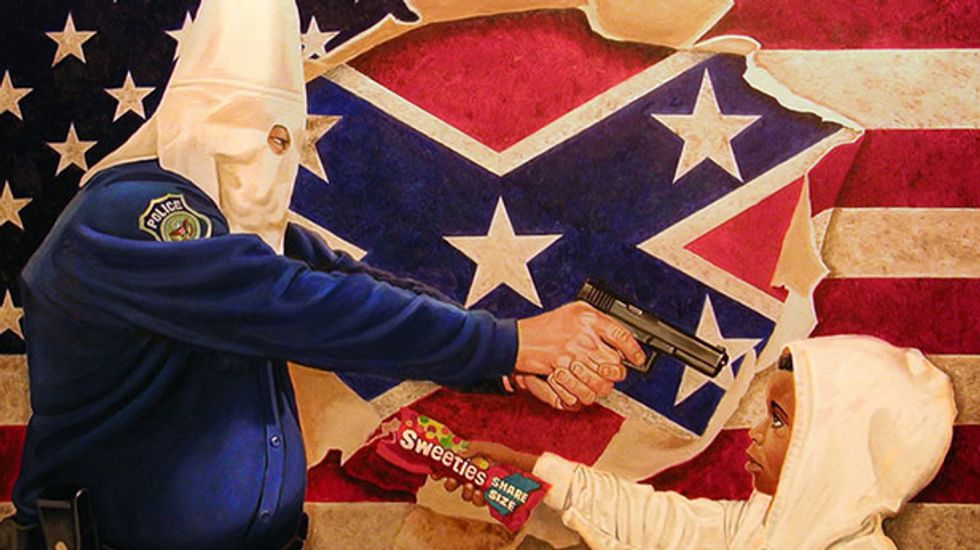 Over the weekend, online auction-house ebay removed an anti-racist painting critical of George Zimmerman on the same day it allowed Zimmerman to sell one of his own paintings for over $100,000.

On Saturday, an 18-by-24-inch oil painting by "therealgeorgez" -- better known as George Zimmerman -- was purchased on eBay for $100,099.99. In the question and answer section beneath the auction, Zimmerman even said that "whoever wins within the Continental United States, will receive this painting deliver by me personally."

Zimmerman's medium is "regular household latex paint," which he used because "I needed to put these visions onto the blank canvas as soon as possible." George Zimmerman currently owes his legal team over $2.5 million.

On the same day Zimmerman's auction closed, ebay removed the anti-racist painting that artist Michael D'Antuono had created in the days after the death of Trayvon Martin. Fifty percent of the proceeds from D'Antuono's auction were to have gone to the Trayvon Martin Foundation, and with five days left to bid, the price for the painting had already exceeded $25,000.

Then eBay "pull[ed] the plug." On his blog, D'Antuono wonders why "Zimmerman was allowed to capitalize on his ill-gotten notoriety, [whereas] I was denied the opportunity to raise funds to help the very foundation named in honor of Zimmerman's victim."

In an email from eBay that D'Antuono shared with Raw Story, eBay claims that the painting violates its strictures that "[i]tems promoting or glorifying hatred, violence, or racial or religious intolerance aren’t allowed. Items that promote organizations with these views are also prohibited."

According to the email, "[t]he painting you listed appears to contain images or icons associated with the KKK which are not allowed to be listed on our site as they represent an organization that glorifies hate and violence."

D'Antuono told Raw Story that he was "outraged" that eBay would mistake a criticism of a hate-group for a statement that "promot[es] or glorif[ies]" one.

D'Antuono will attempt to auction the piece off privately, and remains committed to donating half of the proceeds to the Trayvon Martin Foundation.