Federal judge rules that TSA, FBI can detain and arrest you for carrying Arabic flashcards 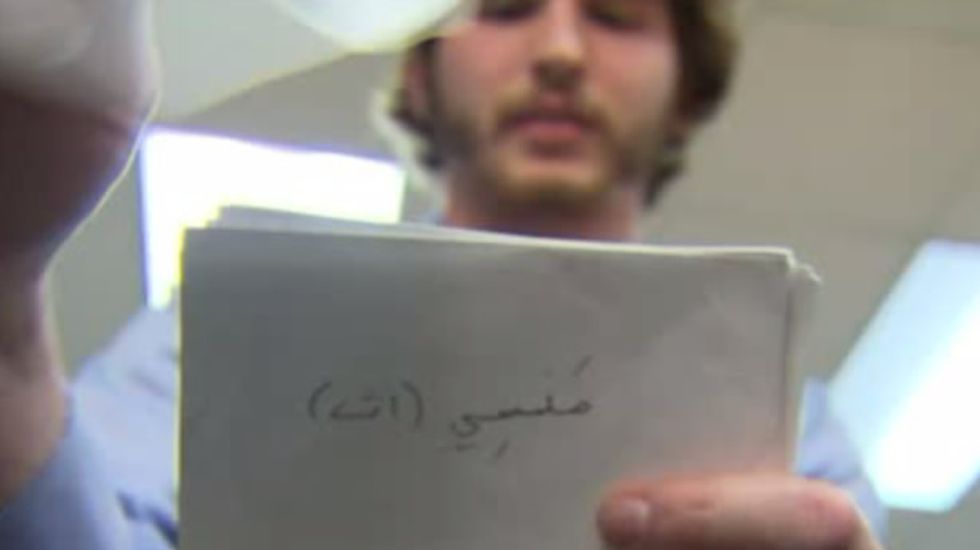 A former college student detained at Philadelphia International Airport after Transportation Security Administration (TSA) officials discovered he was carrying Arabic language flashcards lost his bid to sue the federal agents who detained him.

Nicholas George alleged that the TSA agents violated his First and Fourth Amendment rights when they arrested him as he tried to board a flight from his Philadelphia home to Pomona College in 2009.

According to Chief Judge Theodore McKee's ruling, despite the fact that George clearly had the right to carry the flashcards, the TSA agents were "at the outer boundary" of justifiability in detaining him. In addition to everyday words and phrases like "day before yesterday," "fat," "cheap," and "pink," the deck of flashcards also contained and phrases like "bomb," "terrorist," "explosion," and "to target."

Judge McKee believes that those words and phrases warranted further investigation, even though George told the officers that he was using the flashcards in order to learn Arabic for a study abroad program in which he would be traveling to Ethiopia, Egypt and Sudan.

"I want to serve my country using my Arabic language," George told CNN. "And it just seems crazy to me that for that I was arrested and treated like a criminal."

George claimed that after the first two officers discovered the cards, they swabbed his person and cell-phone for explosive residue, then called a supervisor. George alleged that when the supervisor arrived, she subjected him to an aggressive interrogation.

TSA AGENT: Do you know what language he spoke?

TSA AGENT: Do you see why these cards are suspicious?

While this TSA agent was questioning George, a Philadelphia police officer entered the room, handcuffed him and led him through the terminal to the Airport Police Station, where he was detained for an addition four hours. George claimed that no officers questioned him during that time, nor did any inform him as to why he had been arrested.

Eventually, two agents from the FBI Joint Terrorism Task Force arrived and questioned him, asking whether he was a member of a "Pro-Islamic" or "communist" group, or whether he had ever met "anyone in his travels who was overtly against the U.S. government." After questioning him for 30 minutes, the FBI agents determined George was not a threat and released him.

Neither the TSA nor the FBI disputed George's account of the facts, and Judge McKee ruled that "George's factual allegations do not establish that [the TSA and FBI agents] violated a Fourth Amendment right."

"Once TSA Officials were satisfied that George was not armed or carrying explosives, much of the concern that justified his detention dissipated. However, it did not totally vanish or suggest that further inquiry was not warranted," he wrote.

"Thus, the actions of the TSA Officials corresponded to the level of concern raised by the flashcards."