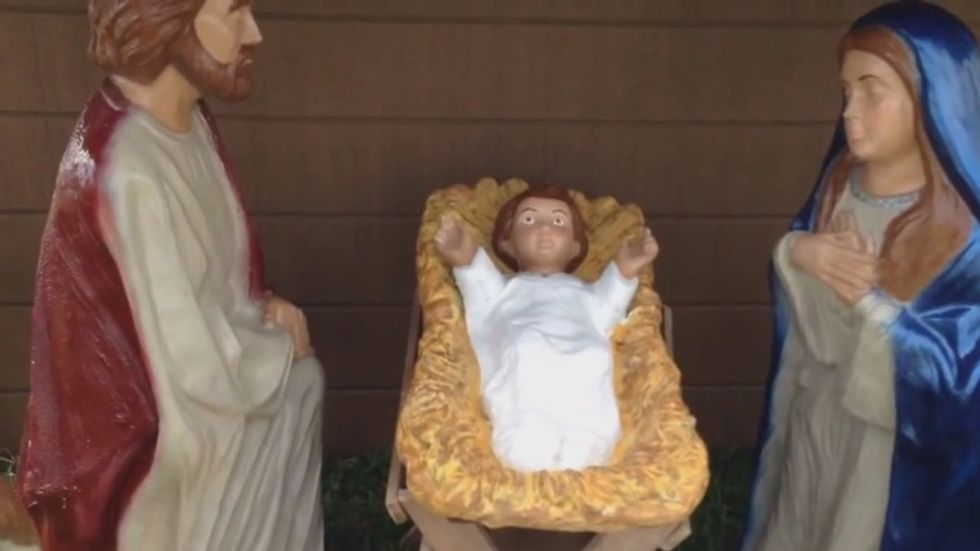 A self-described "militant atheist" is threatening to sue a Florida town after it put up a Nativity display at the fire station even though it had banned them earlier this year so that a Festivus pole would not have to be given equal consideration.

In 2012, the mayor of Deerfield Beach had given in to atheist Chaz Stevens and the American Civil Liberty Union, allowing an 8-foot-tall Festivus pole made of Pabst Blue Ribbon cans to be placed alongside a manger and Menorah. Festivus is a secular holiday created by the television show Seinfield, which some atheists celebrate on Dec. 23.

But to prevent Stevens from putting up the pole again this year, a city spokesperson told the Sun Sentinel that it had banned all holiday displays that it did not put up itself. Many thought that it meant that there would be no Nativity scene because the display belonged to a private business.

"If you read the Bible, it says that leading up to the end days things like this will happen," said Pastor Jeremy Earnest of First Baptist Deerfield Beach warned the paper in October. "People will be against His name. Pulling Christ out of Christmas, pulling Him out of it, it confirms more and more of what He taught about 2,000 years ago."

Gov. Rick Scott's (R) administration did give Stevens permission to place a similar Pabst Blue Ribbon beer can Festivus pole inside the Florida Capitol this year.

In the meantime, a Nativity scene reappeared at Deerfield Beach Fire Station No. 1.

Chaz expressed his outraged in a video posted to YouTube late last week.

"The baby f*cking Jesus, oh, and an angel!" he says. "It looks like somebody stuck their finger up the little baby's *ss."

"Look at this," he said, turning to the Mary and Joseph figures. "How is she convincing him that I'm a virgin. Ha! You know the Wise Men never happened in the story, right?"

"You people won't f*cking learn. Told you I was going to sue."