Glenn Beck: The pope is Person of the Year because 'progressives are fascists' 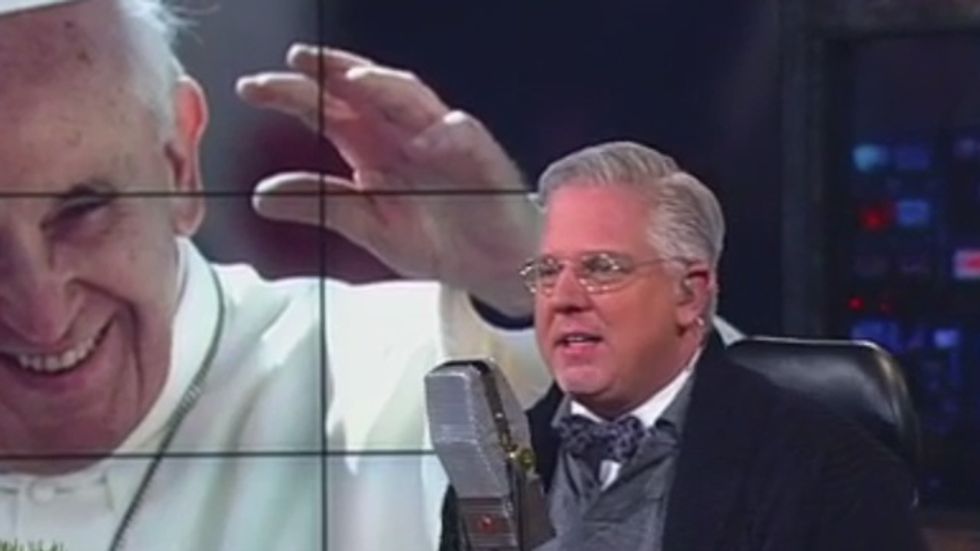 Conservative radio host Glenn Beck on Wednesday reacted to Pope Francis being named Time's 2013 Person of the Year by naming Sen. Ted Cruz (R-TX) as his "Man of the Year."

"It makes me nervous about the pope, quite honestly," Beck said, drawing a comparison between the head of the Catholic Church and President Barack Obama.

"He makes me a little concerned on his Marxist tendencies," he explained. "When you're not on prepared remarks, Marxism starts to creep into your language. When you're asked questions by people, you start to say, 'Look, I don't want to hurt you, I just think that redistribution of wealth isn't so bad.'"

Beck argued that both Health and Human Services Secretary Kathleen Sebelius and Cruz would have made better choices because the implementation of the president's health care reform law would affect "every life on the planet."

"The reason why they didn't pick Ted Cruz is because they don't want to give him any more power," he opined. "I mean, they'll put Hitler on -- they did make Hitler and Mussolini the Man of the Year."

As Right Wing Watch noted on Wednesday, Mussolini was never named Man of the Year by Time magazine.

"Remember, progressives are fascists, they are for fascism. Congratulations," Beck added. "I can tell you right now that they may have put Ted Cruz in the little pool to have his name looked at but nobody considered him."

"That's why The Blaze has selected -- unbeknownst to The Blaze -- Man of the Year, Ted Cruz."