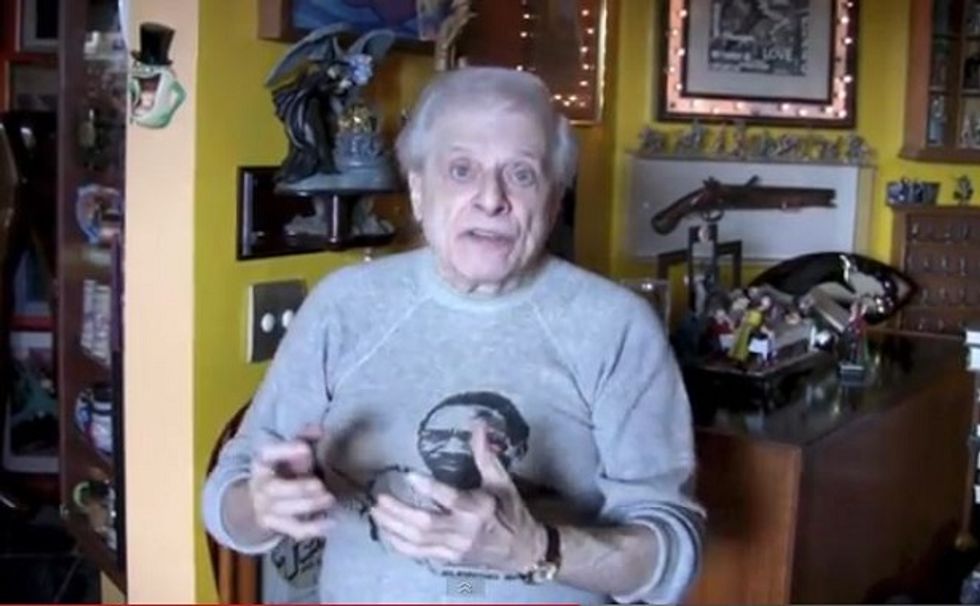 Ellison explains that he got a chance to see the movie because he was invited to a party at the home of some very wealthy friends, and other guests at the event included people who had acted in or worked on the film, as well as representatives of the Disney corporation.

Ellison says he was treated like royalty. But that isn't stopping him from denouncing the film as a fraud.

The famously cantankerous short story writer, now 79, is not known for holding back on his opinions, and doesn't here, accusing the Disney studio of perpetuating "bullshit" in order to burnish Walt Disney's image.

Ellison says that he decided to make the video because Variety, he claims, turned down his offer to write about the movie, even though the publication has printed his reviews in the past.

And he starts out by praising Tom Hanks and Emma Thompson for their performances. But that doesn't last long.

"This film is a refurbishing of Walt Disney's godlike image, which he spent his entire life creating. and it is so f*cking manipulative," Ellison says. "There is a scene near the end that is pivotal to this movie...the movie could not exist without this scene. Never happened. Bogus. Made up. The Walt Disney company made up the scene...It's bullshit. The movie is bullshit from one end to the other."

He's talking about the basic premise, that after 20 years of asking, Walt Disney not only convinced P.L. Travers to sign over the rights to her creation, Mary Poppins, but that she was happy with the result after the 1964 film debuted. Travers, an actress and writer who had been born in Australia under the name Helen Lyndon Goff, published four books about the magical nanny, the first in 1933.

"P.L. Travers...went to her grave despising the movie Mary Poppins. P.L. Travers, who created and tried to protect Mary Poppins from Walt Disney, has now been reviled by this movie to the extent that halfway through you're going to say, what a distasteful woman," Ellison says. "No one else may tell you this"

Ellison is notorious for his rants against producers and publishers who treat writers shabbily. (One of our favorites -- the saga of what happened to his version of "City on the Edge of Forever," which is usually considered the best episode of Star Trek, ever.)

Reactions at his YouTube channel have been interesting (and far more intelligent than the usual YT fare).

One respondent pointed out that it wasn't unusual to see Ellison sticking up for a writer, but if Disney was complex, Travers had her own past.

"Please, let's not deify Travers. She was by all accounts a rather nasty piece of work, and the story about how she adopted one twin but not the other on the advice of her astrologer -- and then kept it a secret from the boy -- is appalling. (And for those reading this, that story isn't in the film either.)"

Other commenters point out that it's pretty standard for a biopic to change the facts, and if any film is going to have a happy ending, it's one from Disney.

Another fun footnote from Ellison's monologue: he mentions that at the party, some Disney employees asked him about the legend of his single day working for the company. Actually, he says, it was only for three or four hours. As Rob Hunter points out, Ellison has told that story before, and it's a wild one.

"What he didn’t realize, and what nobody at his table told him, was that Roy Disney (Walt’s nephew) was sitting right behind him. Lunch ended, and he went back to find his secretary, office, and parking space were no more," Hunter writes.