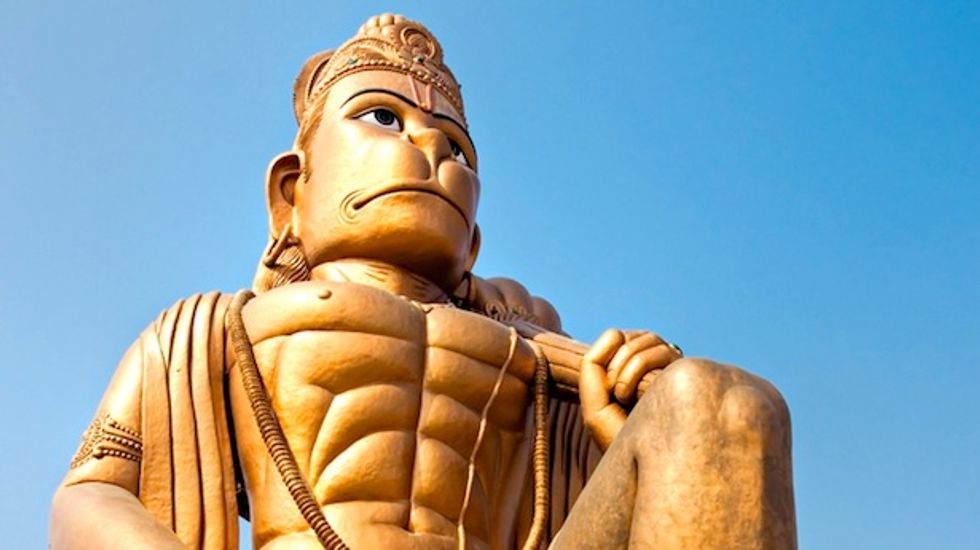 Members of the world’s oldest faith would like to join a display of religious symbols at Oklahoma’s state capitol, joining a Judeo-Christian tablet and a proposed Satanist monument.

The Universal Society of Hinduism plans to submit an application to the Oklahoma State Capitol Preservation Commission for permission to place a statue of Lord Hanuman on the statehouse grounds.

“If the Oklahoma State Capitol was open to different monuments, we would love to have a statue of Lord Hanuman, who was greatly revered and worshipped and known for incredible strength and was (a) perfect grammarian,” said Rajan Zed, president of Universal Society of Hinduism.

State Rep. Mike Ritze (R-Broken Arrow) contributed $10,000 and raised an additional $10,000 in private funds to erect a 7-foot monument to the Ten Commandments last month on the statehouse grounds.

The ACLU sued on First Amendment grounds to have the Old Testament monument removed, and a New York-based Satanist group proposed setting up its own display at the statehouse under a 2009 measure sponsored by Ritze to allow for religious displays.

The Satanists’ plans shocked and disturbed lawmakers, one of whom said he was offended because “this is a faith-based nation and a faith-based state.”

That’s where the Hindus come in.

The fourth-largest faith group in the U.S. – and third-largest in the world – said it would like to join the religious displays to honor Oklahoma’s Hindus and raise awareness about their faith.

Zed said he’d written the preservation commission chairman and others to ask for detailed procedures, required forms and outlines for conditions to be met for proper approval.

The Hindu group said their planned statue of Lord Hanuman would be “big and weather-proof.”

Hemant Mehta, who writes for the Friendly Atheist blog, said the Hindus’ request would likely put Oklahoma lawmakers in a legal and political bind.

“If the Commission votes yes on the proposal, conservatives will flip out,” Mehta wrote. “If they vote no, they’re just inviting a lawsuit. This is beautiful.”