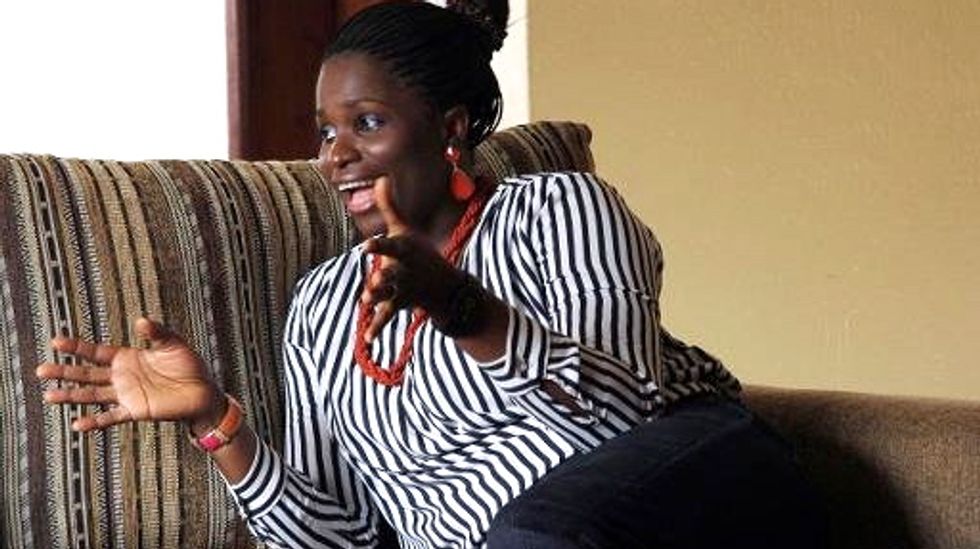 With its tales of infidelity, backstabbing and money-grabbing, "Lekki Wives" has become one of the most talked-about television programs in Nigeria.

But the edgy portrayal of life in one of Lagos' newest suburbs is far from imagined -- and a sharp turn for an entertainment industry long shaped by outlandish plots and, at times, supernatural story lines.

Instead, the series dives straight into key issues facing the country, notably "the ills of what people do for money," said its creator Blessing Egbe.

She wanted to show how Nigeria's so-called economic boom has brought untold riches to a lucky few but left life unchanged for most.

"We have pushed the envelope," she told AFP. "We didn't try to be nice about it."

And the scripts push the limits in this largely conservative, God-fearing country, as one where a character seeks a partner to indulge his need for sadomasochistic sex.

With Africa's biggest population and largest oil industry, Nigeria has averaged more than seven percent economic growth over the last decade, among the highest rates in the world.

But poverty has worsened since 2004, the government conceded last year. And while the middle class has expanded, a good part of the wealth is concentrated at the very top.

The show's tension is driven by such nuances --how all is not what it seems: a tiny minority have gotten rich quickly but many are just faking wealth. Destitution largely remains the norm.

Egbe said her plot lines were "99 percent" inspired by real stories of people craving to be seen as elite, even if the show -- whose title was inspired by the U.S. hit "Desperate Housewives" -- is highly stylized. Characters deliver monologues straight to the camera and performances could not unfairly be described as over-the-top.

Public reaction has been largely positive and the next season, currently being edited, will be even bolder than the first.

"I hope I don't get chased out after season two," Egbe said.

A blue tollgate spanning a six-lane expressway marks the entrance to the real Lekki, one of Lagos' fastest-growing and most-coveted neighborhoods.

Banks, hotels, shopping centers and mega-churches line the well-paved roadway. Many of the buildings are under construction and others look brand new.

Rents in Lagos's posh neighborhoods have long been astronomical and Lekki is no exception: a studio apartment can cost $24,000 (18,000 euros) per year, with payment due in full up front.

Egbe, a 37-year-old mother of three, moved eight years ago to Lekki, a community she says is full of people "who will do anything just to be seen, just to be looked upon as wealthy".

But the pretense does not always hold up.

"You see a big mansion and you go in there and maybe there is no electricity, empty rooms, or maybe the living room is so well-furnished and when you go into the rest of the house there is nothing. It is not real," she said.

Blogger Chigo Compere, who has written about the show, said that for some Nigerians, a Lekki address is "not quite a visa to America" but considered a decent consolation prize.

She recounted a widely shared story about a man who supposedly cannot afford to live in Lekki but has chosen to sleep there in his used Range Rover, parking it in a different location every night to avoid notice.

"Not everyone in Lekki is crazy" and parts of the show are embellished, said Compere, but she calls it a much-needed departure in a domestic industry which can be "very conservative".

"Even if everybody knows what is going on, nobody wants to put it out there," said Omeilli, admitting it's Lovette's extra-marital antics that allow the character to maintain a luxurious lifestyle.

As for the show's popularity, the actress said she is constantly stopped on the street.

"People used to recognize me from past productions but nothing like this," she added.

Egbe herself is "shocked" by the broad appeal of season one, which was first broadcast online in April, then on DVD.

"I thought I was feeding the upper class but I ended up feeding everybody," said Egbe of the appeal, which cuts across socio-economic groups.

The ramshackle DVD shop run by 29-year-old Uchenna Theelar in Lagos' Obalende market is a good example. Demand for the "Lekki Wives" has been overwhelming and she has been sold out for three months.

"People are still asking me for it," she said.